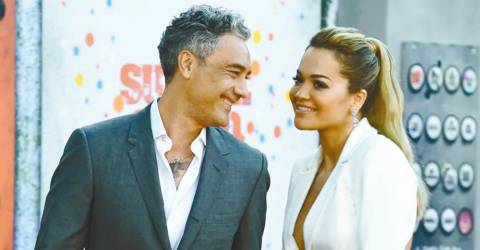 JUST one year after making their debut as a couple, singer-songwriter Rita Ora and New Zealand filmmaker Taika Waititi were reportedly married in a small London ceremony earlier this month.

Ora and Waititi began dating in March 2021 and went public with their relationship last August, and announced their engagement this June.

Now, according to reports, they are arranging a massive celebration to celebrate their secret wedding with family and friends.

The UK tabloid The Sun was the first to report the rumoured nuptials, citing a source who claimed it was “a pretty quiet ceremony and super special for everyone there,“ during which close relatives and friends witnessed the couple were “madly in love”.

However, Waititi and Ora are ultimately arranging a large celebration party.

“Despite living in the spotlight, Rita is determined to keep the relationship as private as possible and didn’t want to make a big song and dance about the wedding,” the source added.

Ora could be seen wearing what seems to be a wedding band in a series of Instagram photographs she released on Sunday, despite the fact that the couple has yet to formally declare their marriage.

Similarly, Waititi was photographed wearing his own wedding band over the weekend on Ora’s sister’s Instagram story.

Prior to the secret wedding rumour, it was said that the couple were aiming to wed “once their respective work commitments finish”.

This would be Ora’s first marriage, whereas Waititi was previously married to New Zealand film producer Chelsea Winstanley, whom he secretly divorced in 2018.