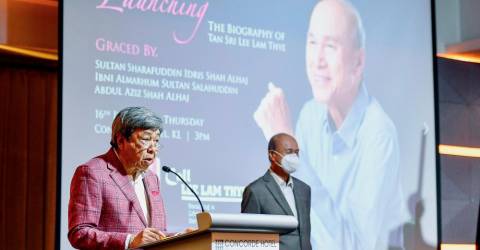 KUALA LUMPUR: The Sultan of Selangor, Sultan Sharafuddin Idris Shah today paid tribute to Tan Sri Lee Lam Thye on his political journey and for showing how a people’s representatives should really be.

The Sultan said he witnessed with his own eyes how impressive Lee’s many years of serving the rakyat (people) had been from being the state assemblyman for Bukit Nenas in 1969 to Member of Parliament for Bukit Bintang for four terms from 1978 to 1990.

“No point becoming a YB with the title Yang Berhormat but not carrying out one’s duties well, just lip service and self interest,” said His Royal Highness during his speech when launching the book ‘Call Lee Lam Thye – Recalling a Lifetime of Service’, here today.

Sultan Sharafuddin was glad that Lee still continues to serve the rakyat and help the people through several non-governmental organisations (NGOs) although he is no longer a political party member.

The Sultan also hoped that Lee will share his side of the story and reasons behind his political retirement in 1990.

Sultan Sharafuddin added that he was also impressed with Lee’s abilities and credibility as a people’s representative whereby he was willing to go down to the ground and always ready to listen to the people’s problems and complaints.

He said Lee was knowledgeable in various matters and always carefully thought out things before talking about an issue, especially involving the daily lives of the people.

Apart from that, he said Lee also cared about stray and abandoned animals so much so he became the patron of the Selangor chapter of the Society for the Prevention of Cruelty to Animals (SPCA).