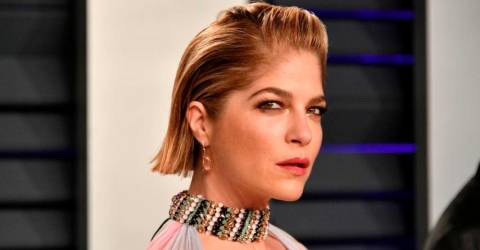 SELMA BLAIR would have been in favour of Legally Blonde ending with Elle Woods (Reese Witherspoon) and her one-time rival Vivian (played by Blair) holding hands on a beach.

Actresses Jessica Cauffiel and Alanna Ubach both told the New York Times last summer that they remembered such a scene having been the original ending planned for the box office hit.

“The insinuation was either they were best friends, or they had gotten together romantically,“ Cauffiel said.

Blair was asked if she remembered anything like that during an interview this month on Evan Ross Katz’s podcast.

“No, but I love that idea! What fun,“ Blair said, adding that she’s friends with the writers.

“I would’ve loved that so much.”

She also addressed plans for Legally Blonde 3, which is still in the works, and Blair is in favour of some “screen time” for Vivian.

“I’m hoping that I at least get to make a cameo,“ she said.

“I’m hoping that that legacy can continue, because that movie is one of the good things in life. It’s a highlight. Like, I really feel like, ‘Yeah, my obit’s gonna look okay.’”

Blair appeared in many popular movies of that late ’90s, including Cruel Intentions, Can’t Hardly Wait and, as a voice on the phone in Scream 2.

When asked about Scream‘s lead actress, Neve Campbell, recently saying that she won’t be part of the upcoming Scream 6 because the salary she was offered “did not equate to the value that I have brought to the franchise,“ Blair replied, “Good for her!”

She added that a man likely wouldn’t be in such a position.

“I hope that they don’t continue lowballing the people that don’t deserve it, especially a lot of women who have really made their mark and deserve to be seen.”

But for all the memorable parts Blair has played, there’s one that she wishes she could’ve done.

“It was a Requiem for a Dream I wanted so much,“ Blair said.

“And I went in a few times, and I was close to it but, you know, they met Jennifer Connelly and, you know, it was done,“ she said.