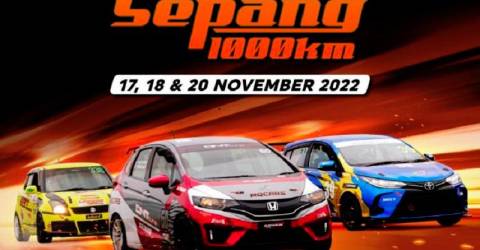 THE year cannot end without running Malaysia’s popular endurance race – the Sepang 1000km (S1K) – and it will take place on November 17, 18 and 20 at the Sepang International Circuit (SIC). On November 19th, it’s voting day for the General Elections so activities will be suspended on that day,

As a big finale to the race calendar, this year’s S1k has the highest number of entries since 2019. The full grid will see no less than 77 cars. The entries are not only from Malaysia; with travel restrictions due to the pandemic now eased, there are also competitors from neighbouring countries.

For the first time ever, the S1K will see a Perodua Myvi – referred to as ‘King’ these days – taking part. A 1.5-litre model will be entered by JV Motorsport, with Fariqe Hairuman, Faiz Sulaiman and Shafiq Rosli taking turns behind the wheel. The team has been busy preparing their car as the decision to enter was only made in September.

This year’s event will have some difference from the usual schedule due to Saturday being voting day and no activities taking place. The Free Practice will be on Thursday and qualifying sessions will be on Friday. The race will be flagged off on Sunday morning at 9:30 am and should end by 6:30 pm with a total of 181 laps.

Entry to the Main Grandstand is free but those who wish to get closer to the cars and competitors can purchase a Paddock Entry pass at RM106. If you can’t make it to the SIC, the race will also be streamed live on the SIC Facebook page.