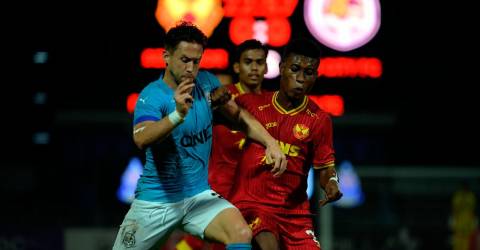 Khalid, who is disappointed with the current performance of his former team, believes that changes need be made because to him, most of the players do not deserve to don the Selangor jersey and play in the Super League championship.

He said Selangor’s fourth consecutive defeat after losing 0-1 to Petaling Jaya (PJ) City FC at the Petaling Jaya City Council Stadium (MBPJ) yesterday, was very telling of the quality of players that the 33-time Malaysia Cup champions currently have.

“Selangor should be a team that can challenge the major teams in the Super League like JDT (Johor Darul Ta’zim) and TFC (Terengganu FC), but with defeat after defeat, I see this is due to the quality of the players, no other reason.

“As a former player, I feel that their quality is largely not up to the level of the Super League and do not qualify to wear the Selangor jersey. The management should really look for players who can make Selangor a competitive team next season,“ he said when contacted by Bernama today.

Khalid said with the team’s good finances, Selangor should focus on getting accomplished players instead of signing players who have not yet proven their ability.

With more slots for the Asian Football Confederation (AFC) Champions League up for grabs for the 2024 season, Khalid said Selangor needed high-quality players if they wanted to pursue their dream of playing at Asia’s highest stage.

“The management plays an important role in getting quality players; I am disappointed and upset as the FAS (Selangor Football Association) president, Raja Muda of Selangor Tengku Amir Shah Sultan Sharafuddin Idris Shah has fully given his trust to them.

“So, they (management) have to be serious with what they have been entrusted with,“ he said.

Following Selangor’s poor performance, the team is currently ninth in the Super League after collecting only 16 points from 15 matches, in addition to being eliminated in the semi-finals of the FA Cup at the hands of TFC.

Selangor is currently going through a six-year championship drought after the last time they enjoyed success when they won the Malaysia Cup in 2015.

Selangor also still failed to end the 13-year wait to win the FA Cup and the last time they won the Super League championship was in the 2010 season.-Bernama