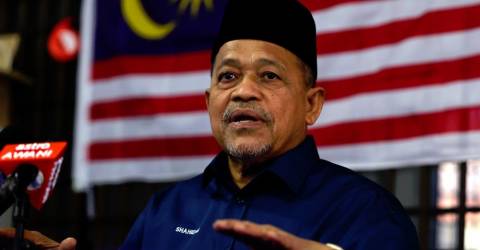 KANGAR: The move by political figure Datuk Seri Shahidan Kassim (pix) to contest in the 15th general election (GE15) at the last minute, on a Perikatan Nasional (PN) ticket is seen as the starting point for the rise of the coalition in trouncing the Barisan Nasional to take over Perlis.

Election Commission (SPR) chairman Tan Sri Abdul Ghani Salleh announced that PN succeeded in forming the state government after it secured more than 50 per cent of the votes.

It cannot be denied that Shahidan was Perlis PN’s gallant hero who paved the way for the party’s extraordinary victory as it swept three parliamentary seats in addition to 14 out of 15 state seats which was way beyond the coalition’s initial target of nine state seats to win a simple majority.

Shahidan has been in control of the Arau parliamentary constituency since 1986 apart from holding the portfolio of Menteri Besar for the state from 1995 to 2008.

State PN chairman Mohd Shukri Ramli said Shahidan successfully carried out his duties as Perlis PN’s warlord in fighting for the unity of the ummah starting in Arau before going to other areas in the northern states of the country.

“I hope this idea of ​​ummah unity can be developed together in PN and will be followed by the other states to form a clean and stable government,“ the PAS Perlis Commissioner told reporters after PN’s landslide victory yesterday.

Playing the role of a warlord is not something new to Shahidan who was once UMNO liaison committee chairman as he was the person responsible for retaining BN strongholds in GE14.

When BN experienced a political tsunami in GE14, Shahidan managed to help win 10 of the 15 state seats to enable it to form the state government.

The party leadership later made a drastic decision by not listing two Perlis politicians namely Shahidan and Datuk Zahidi Zainul Abidin who was also the Padang Besar parliamentary incumbent as BN candidates in GE15.

When new faces and ‘outside’ candidates’ namely Puteri UMNO chief Datuk Zahida Zarik Khan and Datuk Rozabil Rahman were selected to contest in the hot seats, Shahidan and Zahidi decided to stand as PN and Independent candidates.

Apart from the people of Perlis wanting to see a change in its state government and succeeding to do so through the ballot box, the votes of the young people also played a part in allowing PN to take over BN’s reign in the state for the past 65 years.

It was a big upset when Azlan lost to PN-PAS candidate Fakhrul with a majority of 4,329 votes in a six-cornered fight for the Bintong state seat.