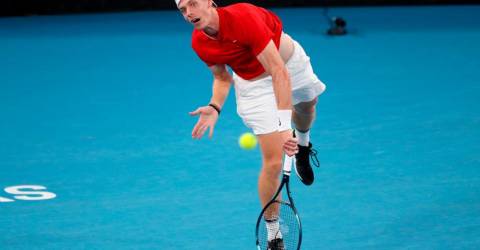 Carreno Busta came into the evening contest at the Ken Rosewall Arena in Sydney brimming with confidence, having not dropped a set all week and with a 4-1 head-to-head record against the 14th-ranked Shapovalov.

But the 22-year-old left-hander survived a barrage of breakpoint chances, including five in the opening game of the match, and held his nerve to claim victory in an hour and 38 minutes to give Canada a 1-0 lead in the tie.

“(I had) a little bit of nerves going out. Obviously I’ve got a tough record against Carreno Busta, so I knew it was going to be a tough match,” Shapovalov said.

Canada, the first team in the ATP Cup’s three-year history to have lost a tie en route to the final, were swept by the United States in their opening group tie and also lost their first match against Britain.

But Felix Auger-Aliassime and Shapovalov, who had contracted the novel coronavirus in the leadup to the $10 million team event, bounced back with tie wins over Britain, Germany and then last year’s winners Russia.

“It’s a huge win, but we haven’t finished the job,” Shapovalov said.

Roberto Bautista Agut, who has been 4-0 this year, will meet Auger-Aliassime in the must-win second singles to keep alive the hopes for Spain and ensure they do not end up as runner-up for a second time after losing the 2020 final to Serbia. — Reuters