There’s a joke early on in Shazam! that ambitiously links child foster care with social-inclusion policies at American universities and, improbably but oh so importantly, it works.

Gets a big laugh, in fact – especially the perfectly timed fist-bump, punchline to a gag that turns out to be funnier, cleverer and just a little bit bolder than anything I was expecting.

As the laughter subsided, I could feel my hunched shoulders easing down and my body relaxing: Shazam! was going to be more fun than I thought. 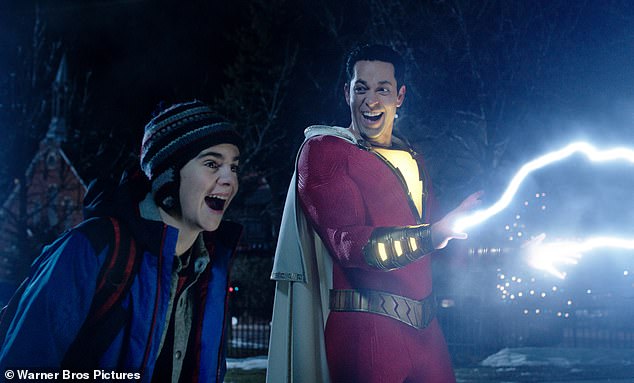 Shazam! has a youthful enthusiasm and joyful silliness that is unexpectedly infectious with a spot-on Zachary Levi as Shazam and an eye-catching Jack Dylan Grazer as Freddy

And it is. Despite being based on a character that sounds like a cross between Deadpool and Kick-Ass, Shazam! has a youthful enthusiasm and joyful silliness that is unexpectedly infectious.

Yes, the idea of a superhero with jokes means the comparison with Deadpool, the laconic superhero played by Ryan Reynolds, is valid, but this is Deadpool meets Tom Hanks’s Big, with joyful dollops of Back To The Future and Ghostbusters.

Normally with a modern superhero picture, it’s the visual effects that take centre stage but here, despite being perfectly good, they’re going to have to slip down the list. 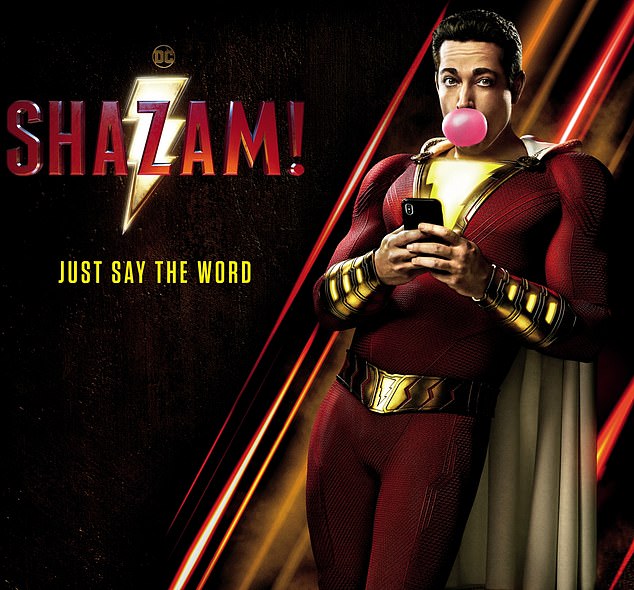 When Billy utters the magic word he’s transformed into a muscular and definitely adult superhero who is bullet-proof, can fly and is old enough to buy a beer

Because this is a superhero film – and this one is from the DC Comics stable rather than Marvel – that works because of almost everything else: screenplay, direction, casting, performances, wardrobe, music… I could go on.

As indeed does the film, which, for all the fun, is a little overlong.

So what’s it about? Billy Batson is an independent but troubled 14-year-old who’s been passed from foster home to foster home but never stopped looking for his mother who – in a heartbreaking early flashback – disappeared after she lost him at a crowded funfair when he was three. 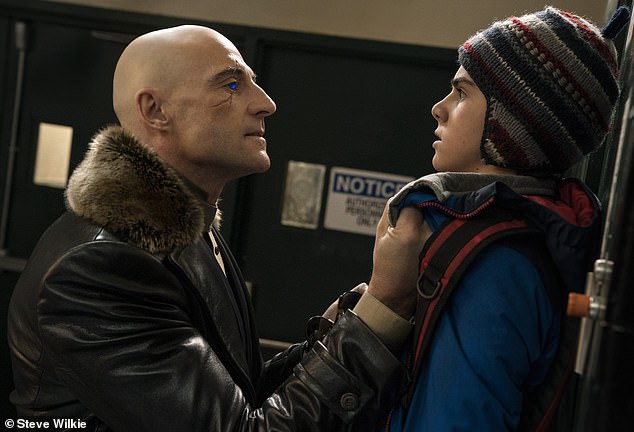 So when he arrives at his latest foster home – the Vasquez family – he makes little attempt to fit in, preferring to ride the Philadelphia subway in the endless search for his mum.

But when the train makes a distinctly unscheduled stop at what we will eventually learn is the Rock of Eternity, it’s not his mother who awaits but an ageing wizard (Djimon Hounsou) desperate to find a champion to take on his magical mantle, particularly in the battle against the seven deadly sins.

‘Lay your hand on the staff,’ commands the wizard.

‘Eww, gross,’ replies Billy, as any modern 14-year-old boy would. 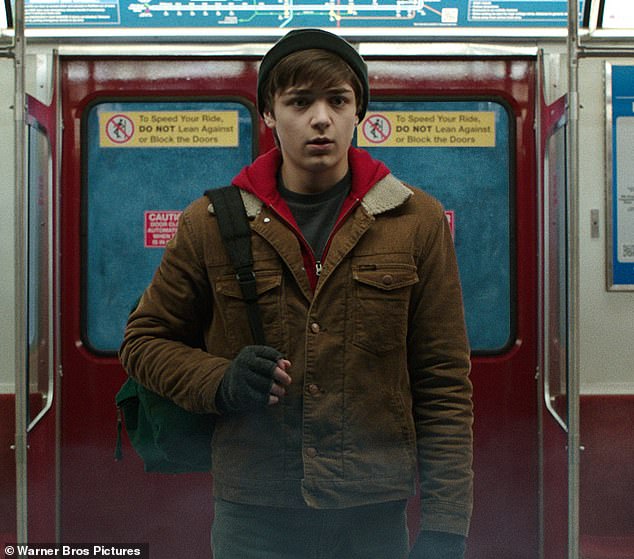 But before very long, Billy has uttered the magic word – no prizes for guessing what it is – and has been transformed into a muscular and definitely adult superhero and we’re away.

Or we are once Billy has raced back to the only safe place he knows – the Vasquez residence – and told his disabled foster sibling, Freddy, what’s happened.

The film is directed by David F Sandberg, hitherto best known as a horror specialist who made his name with Lights Out (2016) and Annabelle: Creation (2017). That background might explain one or two errors of judgement (be warned, the film begins with a very nasty car crash, while later there is a fleeting, violent, visual sex reference that should have ended up on the cutting-room floor), but in between he demonstrates a real talent for comedy and draws terrific performances from his not particularly well-known cast.

At the heart of the story – and most of the humour – is the idea that teenage Billy has not only become a superhero but an adult at the same time. He’s not sure what to be more excited about: discovering that he’s now bullet-proof and can fly, or being able to buy beer and get into ‘gentlemen’s clubs’.

The scene in a toy store in which Shazam runs across a giant keyboard is a direct reference to that other boy-turned-man film, Big.

Asher Angel is convincingly cool as Billy, while Zachary Levi, who could so easily have over-played the role, is deliciously spot-on as Shazam, the excited kid in a trainee superhero body.

But driving much of the humour is an eye-catching supporting turn from Jack Dylan Grazer as the initially disbelieving but rapidly supportive Freddy.

With Mark Strong on normal classy form as the evil Dr Sivana (how nice to see a baddie getting their own origins story for once), the stage is nicely set for a sequel.

DC – owner of the Batman, Superman and Justice League franchises, of course – has found itself a new film superhero. And he’s a winner.

ALSO OUT THIS WEEK

I love a good western, and this by French film-maker Jacques Audiard embraces the genre with enthusiasm and delivers a fine movie about gold and greed. 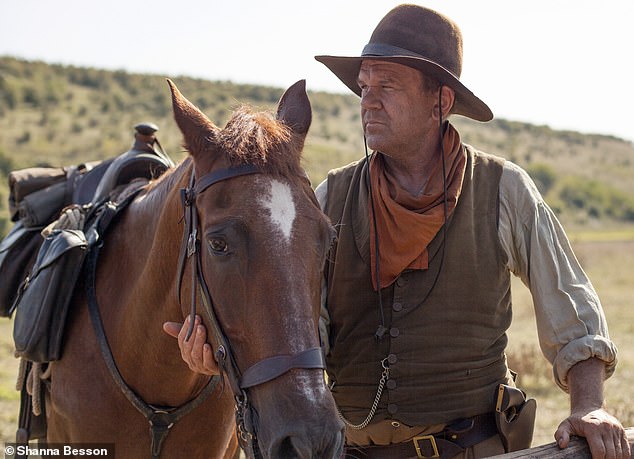 Joaquin Phoenix and John C Reilly (above) play Charlie and Eli Sisters, two hired guns who in 1851 earn a nasty living settling bloody scores for a mysterious character, The Commodore

Their latest job sees them in vigorous pursuit of John Morris (Jake Gyllenhaal), a bookish scout who, in turn, is looking for an unorthodox gold prospector played by our own Riz Ahmed.

It’s wordy, slow-moving and reflective but it’s also funny, well written and nicely played out by a cast firing on all guns.

Released in time for the Easter holidays, this animated feature is from the clever people behind The Boxtrolls and Coraline. But despite the high quality of the animation and lovely voice performances from Hugh Jackman, Zach Galifianakis and Stephen Fry, it lacks originality.

Still, it is commercial and funny and will fill a rainy Easter afternoon.

A semi-dramatised retelling of the extraordinary life of the Cuban ballet dancer Carlos Acosta. 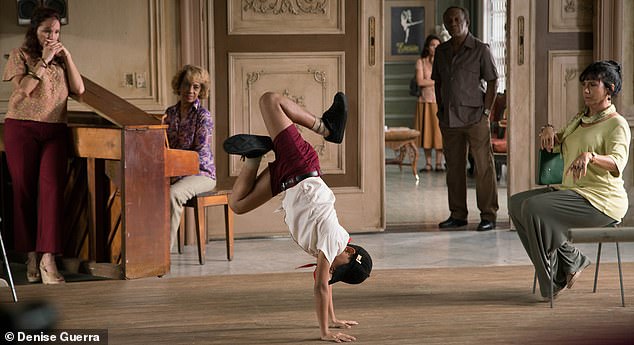 Acosta, playing a version of himself, graces the dance sequences in this drama of a stubborn little boy – nicknamed Yuli – growing up in poverty in Havana. The story addresses challenging subjects such as racism and homophobia, and Acosta’s difficult father is beautifully played by Santiago Alfonso. 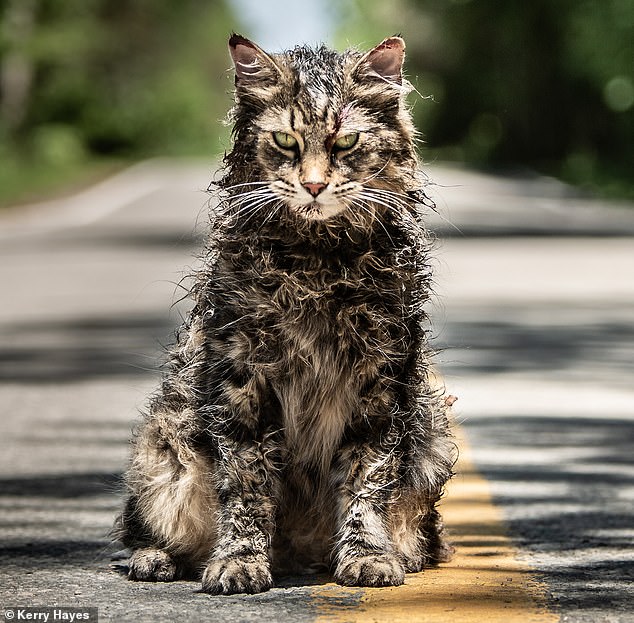 There are some old Stephen King film adaptations that shouldn’t be reincarnated, and Pet Sematary – from 1989 – is surely one of them. This retelling of the story of a sinister woodland graveyard that brings its occupants back to life is well acted but proves more silly than scary.