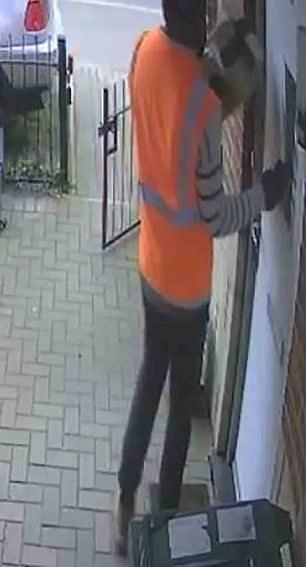 An Amazon driver was caught on camera letting himself into a woman’s house to deliver parcels.

Lisa Metcalfe had been at home in Cheltenham, Gloucestershire, on Saturday when the man unexpectedly stepped through her front door.

The 39-year-old said she confronted the delivery driver who claimed that the door handle had opened accidentally after one of the boxes in his hand pressed against it.

In the clip the driver, who is wearing an orange high-vis jacket, can be seen striding toward the house with four boxes in his arms.

He gently knocks on the door before appearing to immediately push down on the handle to gain access to the property.

The Amazon driver leans his shoulder into the door before crouching down to place the parcels inside.

The man then stands back up and lets go of the handle as Lisa comes to the door – although she is not seen on camera. 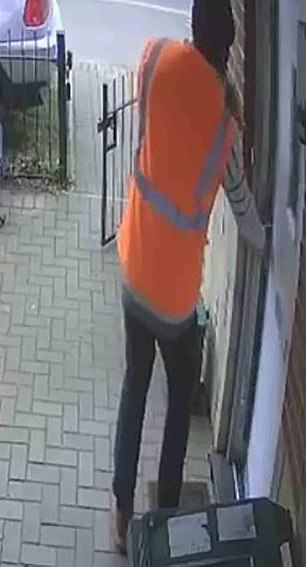 In the clip the driver, who is wearing an orange high-vis jacket, can be seen striding toward the house in Cheltenham, Gloucestershire, with four boxes in his arms

The CCTV footage did not record audio of the conversation but Lisa claims the driver said the boxes in his hand had slipped which had caused them to push down on the handle.

The pair briefly exchange words before Lisa gathers up the parcels and shuts the door as the delivery driver walks away.

It appears that he briefly considers doubling back but then continues to make his way out of the front gate and to his car.

Lisa claims she has since complained to Amazon who have offered a £10 credit to her account. 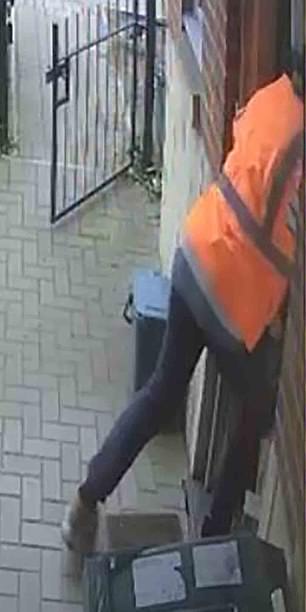 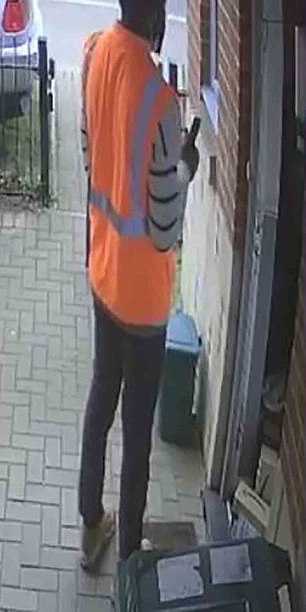 She shared the footage on Facebook on Saturday alongside a caption that read: ‘I think you need to explain to your drivers what trespassing means and they do not open people’s doors!’

Speaking earlier today, Lisa said: ‘I was scared as everyone was home so I didn’t know who was coming into my house.

‘I told him not to come in and my house and asked why he was just opening my door and stepping in.

‘He tried to tell me the boxes knocked the handle down but you can clearly see that didn’t happen.

‘I am now locking the door at all times as this has left me very shaken.’