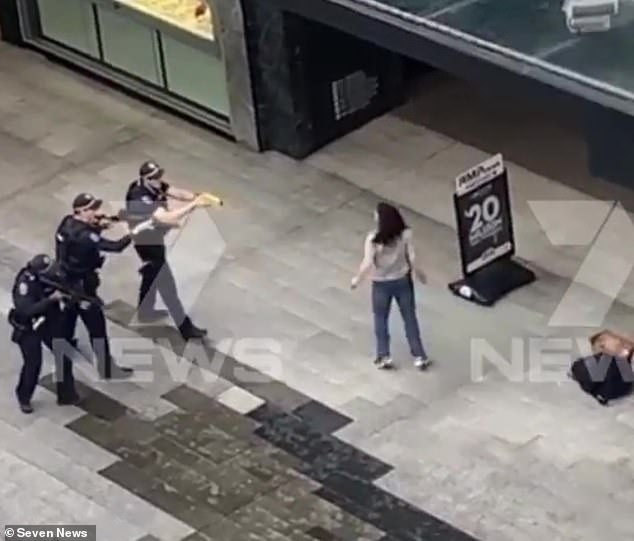 Shocking footage has emerged of three police officers tasering a woman in the middle of a busy shopping mall.

Police were called to Rundle Mall, in Adelaide‘s CBD,  about 11.30am on Thursday to reports a woman was wandering around with a knife.

A video posted online showed the officers surrounding the women with taser guns and screaming at her to ‘get down’ as she ranted at them.

The woman, who did not appear to be holding anything in her hands, then jumped towards them with a tensed fist, prompting the officers to fire.

The taser hit the woman in the chest and she dropped to the ground, clutching her arm as she writhed in pain before one of the officers demanded her to roll onto her stomach.

The clip ended with the woman lying on her stomach, arguing with the cops after they asked her to put out her arms.

South Australia Police said the incident unfolded when the mall’s security staff approached the woman and she allegedly pulled out a knife and threatened them.

‘Security followed her into the mall and contacted police,’ SA Police said.

‘Members of SAPOL’s Security Response Section were quickly on scene and subdued the woman using a taser.’

Police allege the woman had a ‘box cutter and two pairs of scissors’ with her when she was arrested.

The 36-year-old woman from Blackwood was taken to the Royal Adelaide Hospital where she will be assessed.

On her release, she is expected to be charged with carrying an offensive weapon and assault. 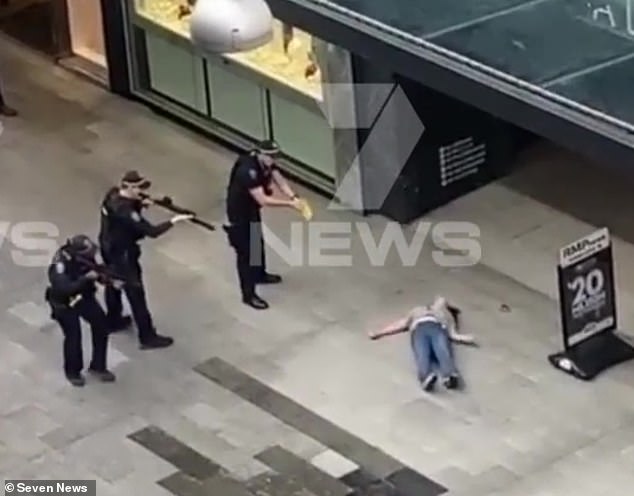 After taking several steps towards the police, an officer fired a taser gun and she dropped to the ground