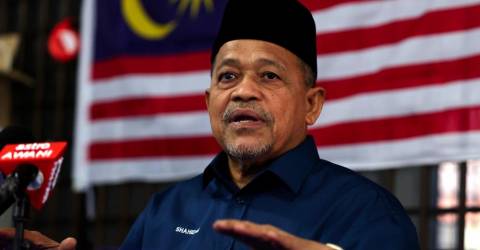 PETALING JAYA: A verbal altercation ensued during the Dewan Rakyat proceedings due to Deputy Prime Minister Datuk Seri Fadillah Yusof being questioned by Datuk Seri Shahidan Kassim on invoking the Yang di-Pertuan Agong and Malay rulers’ names in tabling the motion of confidence in the current premier.

According to FMT’s report, the incident occurred when Fadillah said the motion of confidence in Prime Minister Datuk Seri Anwar Ibrahim should be passed since the King and the Conference of Rulers had consented to his appointment.

Shahidan who is the Arau MP then interrupted him and said the Dewan Rakyat’s Standing Orders stated that the King and the Conference of Rulers should not be used to influence the outcome of the country’s leader’s selection.

“(This vote of confidence was called) because Tambun (Anwar) is brave, unlike the eighth prime minister,” Hulu Langat MP Sany Hazman cut in.

Sany was referring to former premier Tan Sri Muhyiddin Yassin where many MPs had filed motions of no confidence against Muhyiddin during his stint as Prime Minister however those motions were not allowed to be tabled.

This caused a shouting match to erupt in the Dewan Rakyat between Shahidan, Sany and other MPs from the government and opposition blocs.

Speaker Johari mediated the situation by telling Shahidan that 12 MPs will get the chance to debate the motion whereas the commotion worsened after an anonymous MP had allegedly uttered the word stupid ‘bodoh’ .

This made Bayan Baru MP Sim Tze Tzin and Jelutong MP RSN Rayer urge the MP to retract their comment, marking it as “unparliamentary.”

Johari then ordered the MPs to quiet down and called for the debate on the motion to ensue with Larut MP Datuk Seri Hamzah Zainuddin being the first to speak.