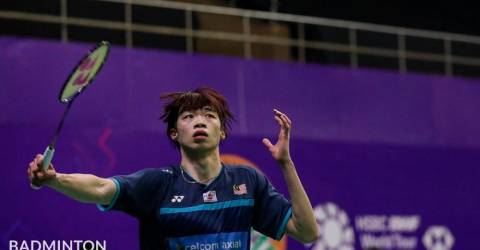 KUALA LUMPUR: After displaying an impressive form to reach till semi-finals in his maiden Badminton World Federation (BWF) World Tour Super 500 event (third-tier), Ng Tze Yong (pix) vows to improve his stamina and speed to be able to rub shoulders with the world top players.

Tze Yong, who had a good year in 2021 by winning three lower-tier tournament titles – the Polish Open, Belgian International and Scottish Open – admitted that he could not catch up Sen’s rhythm in the third game, leading to his defeat.

“Overall, I am happy with the results because this is my 500 tournament debut. In the first game, I didn’t face any problem, in the second, I lost focus when leading 12-10, before he increased the speed further in the rubber set, which I couldn’t follow.

“I felt I need to work on increasing my speed, though I can match his speed in the first two games, I couldn’t in the decider,” he said through a video from the Badminton Association of Malaysia (BAM) today.

He will next feature in the Syed Modi India International 2022 in Lucknow, India from Jan 18-23. -Bernama