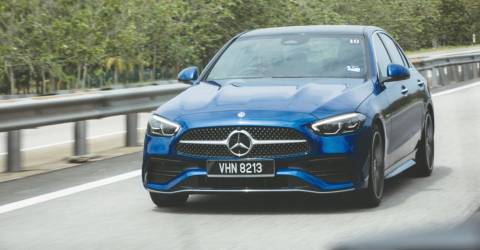 WHILE a Mercedes-Benz S-Class is the ultimate symbol of success, the C-Class is a loud statement of intent.

Before the rise of the A-Class and CLA, it was the C-Class that was the entry level model to the wonderful world of Mercedes-Benz.

It was the car to buy for young executives who had just received their first big pay day.

The C-Class took over from the iconic 190E and the new W206 is the fifth-generation model, and is arguably the best C-Class ever made.

As handsome as the new design may be, Mercedes has opted for a similar design lingo across the board. It is now difficult to tell the new E-Class and C-Class apart from a distance.

The rear is where all new Mercedes-Benz models are painfully identical.

I personally can’t stand the fake exhaust tips moulded into the rear bumper, while the real exhaust are neatly tucked away behind the bumper.

But the C300 makes up for that with the sportier look and feel of the two C-Class models currently on offer. The C300 comes with an AMG body kit and sportier 19-inch wheels.

And it is most loveable in Spectral Blue. It is unfortunate though that this colour is only for the CBU models, and will not be available in the upcoming CKD models.

The C200 on the other hand seems mundane in comparison. The Obsidian Black doesn’t do much to accentuate the design lines of the car, while the 18-inch wheels look common in comparison to the ones on the C300.

Both cars also feature the iconic power dome bulges on either side of the bonnet, a feature that was once reserved for the fire-breathing AMG models only.

The C-Class now offers the most spacious interior ever seen in a C-Class, ever. The rear seats are especially comfortable for taller passengers while the front seats feel as spacious as the W124 E-Class.

However, a tall driver and the front passenger will find their knees rubbing against the sides of the centre console.

The quality of the buttons are typical of modern Mercedes-Benz’, which means they are neither great nor lacking.

Most buttons are now of the haptic type, which means they are piano black in colour and touch operated. All of the buttons on the steering wheel for example are haptic.

Personally, haptic buttons work fine but they attract smudges and highlight dust particles like moths to a light bulb.

Perhaps Mercedes-Benz designers could take a card from Lexus designers who believe that the essential controls such as air-conditioning and volume still warrant physical buttons since the driver will be reaching out to them while driving.

The interior differences between the two cars are also vast, such as the fact that the C300 comes with a moon and a sunroof while the C200 does not.

It doesn’t just end there, even the trimming is different, with the C300 getting the sportier trim.

However, both models get the utterly dominating 11.9-inch portrait oriented touchscreen display. This may seem a little distracting at first, but key controls such as air-conditioning settings are on permanent display, which makes them easily accessible.

Accessing the menus takes some getting used to, but having such a large screen at the centre can definitely be distracting when driving.

There are other nitty gritty details around the interior that distinguish one from the other, but the biggest difference is of course the powertrain.

Both C-Class models share the same 9-speed gearbox, which Mercedes calls 9G-Tronic. It was specifically developed to adapt to something called the Integrated Starter Generator (ISG) which is basically an electric motor installed in both models as well.

The new gearbox is said to be 30% more efficient thanks to an optimised mechanical pump. And it also comes with a new multi-core electronic processor that can manage an increased amount of computing power. This has thus reduced the amount of hefty electrical components by a staggering 30%!

The engines of both cars though are totally different.

The C200 is powered by a 1.5-litre turbocharged powerplant that puts out a hearty 201hp and 300Nm of torque. This hike in power is achieve with the integration of the aforementioned ISG motor. This lets the C200 accelerate to 100kph in just 7.3 seconds and a 246kph top speed.

The C300 on the other hand gets a 2.0-litre turbocharged engine that puts out an impressive 255hp and 400Nm of torque. This is good for a six second charge to 100kph and tops out at 250kph.

All in all, the new W206 C-Class is undoubtedly the best C-Class ever. The C200 is the thinking man’s choice while the C300 is for those who prefer a sporting flair to their car.

Either model offers an armada of features that includes a meter panel that can be individualised with three display styles, and you can change that according to your mood so you never get bored.