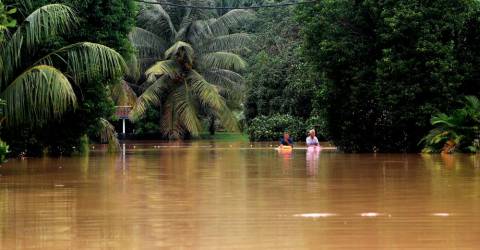 KUALA LUMPUR: The flood situation in Johor, Pahang, Negeri Sembilan and Melaka has improved with the number of evacuees at relief centres (PPS) showing a decline this evening, while those in Sabah remained changed.

In MELAKA, State Civil Defence Force (APM) director Lt Col (PA) Cuthbert John Martin Quadra said the number of evacuees has dropped to 397 people as of 4pm today, compared with 406 people this morning, all of them being housed at a PPS in Alor Gajah and three centres in Jasin.

In PAHANG, the State Disaster Management Committee Secretariat reported that the number of evacuees was down to 656 people from 189 families and they are being placed at 19 PPS, in Pekan, Rompin, Bera and Maran compared with 774 people at 20 PPS this afternoon.

According to the publicinfobanjir.water.gov.my website, the water level in Sungai Bera, Bera has exceeded the danger level as of 4pm today.

In SABAH, the number of evacuees at three PPS remained at 55 people from 15 families.

The State Disaster Management Committee informed that in Telupid, the Kampung Gana Jati Mosque is sheltering 15 victims from six families, while 20 people from five families are at the Maau Village Hall.

Meanwhile, according to the Malaysian Meteorological Department thunderstorms are expected in one or two places in Sabah tonight, with temperature ranging between 22 degrees Celsius and 31 degrees Celsius.

Vidyananthan said the weather throughout he state, including the districts affected by the floods, was sunny except for Batu Pahat which had cloudy weather.

In NEGERI SEMBILAN, based on the Social Welfare Department (JKM) Info Bencana application, only six evacuees from two families are still at the Dewan Orang Ramai Kampung Puom PPS in Jelebu.