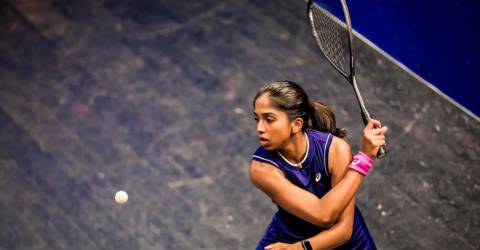 He said the 23-year-old needs sufficient playing time to regain her fitness after being involved in a road accident in June, adding that she also needs to get back into the groove as she has been listed to lead the country’s charge in the 19th Asian Games in Hangzhou, China next September.

“She started playing squash three weeks ago but is still not at the same level as she was prior to the accident as she still suffers from a stiff neck, which will take some time to go away. I dare say she’s 70 per cent healthy.

“Next month (January), she is likely to compete in her first tournament since the accident, representing Cornell University in the College Squash Association (CSA) national Collegiate Individual Championships in the United States,” he said when contacted by Bernama.

Maniam, however, said that Sivasangari, who will return to the United States tomorrow (Dec 14), would continue to undergo physiotherapy at the university so that she can fully recover and come back stronger.

He said that world number 19 Sivasangari, who trains under coach David Palmer at Cornell University, was on the right track to return to action next year.

“Although her rehabilitation is over, she still needs to undergo physiotherapy to loosen her neck tissues and muscles (because) as I said, it’s a slow process, but I believe in a month she will be okay,” he said.

Sivasangari, who sustained head injuries in an accident at the Maju Expressway at 3.46 am on June 26, was a passenger of a vehicle that was 90 per cent razed after colliding with a one-tonne lorry.-Bernama