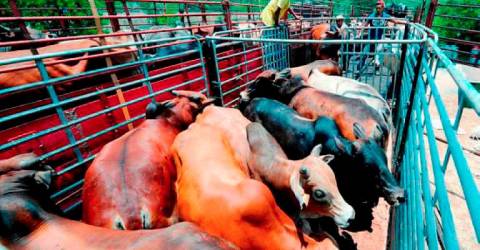 PASIR MAS: The General Operations Force (GOF) seized 12 cows worth RM67,200 believed to have been smuggled from a neighbouring country in a raid near Kampung Tok Rusa, Meranti, here, last night.

Kelantan ‘Op Wawasan’ field commanding officer, Supt Azhari Nusi said the seizure was made after a team from the 9th Battalion of the GOF conducted a raid at a bush area in the location at 10 pm.

He said members of the intelligence unit had received information on a move to smuggle cattle from a neighbouring country through Sungai Tok Rusa which is connected to Sungai Golok.

“My team had observed and followed the direction of the boat and saw some men pulling out cattle from the boat onto land.

“Realising the presence of the GOF personnel, the smugglers fled towards Thailand using the boat. Checks along the riverbank found 12 cows suspected to have just been smuggled from the neighbouring country,“ he said in a statement today.

Azhari said that after about an hour of waiting, no one showed up to claim the cows and the case would be investigated under Section 11(1) of the Malaysian Quarantine and Inspection Services Act 2011.

He added that cattle smuggling was getting rampant due the increase in demand for beef among the locals during Ramadan. — Bernama