The Royal Canadian Mounted Police are world-renowned for their slogan: the Mounties always get their man.

This reputation was forged in 1932 when they spent six weeks chasing down illegal hunter Albert ‘Mad Trapper’ Johnson until they eventually caught and killed him.

When the Spice Girls became the biggest pop band on the planet 20 years ago, I was editor of the Daily Mirror and, like everyone in Fleet Street, heard persistent rumours that two of them – Mel B and Geri Halliwell – were more than just good friends

I’ve always treated journalistic scoops the same way; you just have to keep pursuing a story until you nail it, however long it takes.

When the Spice Girls became the biggest pop band on the planet 20 years ago, I was editor of the Daily Mirror and, like everyone in Fleet Street, heard persistent rumours that two of them – Mel B and Geri Halliwell – were more than just good friends.

But neither of the two women ever admitted it.

However, when Mel B – who is openly bisexual – agreed to appear on my new series of Life Stories, I sensed a chance to finally get to the bottom of this enduring showbiz legend.

There was only one concrete clue we found in researching the show: in 2003, Geri told US radio star Howard Stern she once had sex with ‘a famous woman’.

‘It was part of experimenting,’ she revealed. ‘I was drunk at the time. I could never ever say who it was.’

I wonder… as the Spice Girls once sang, was this the moment two became one?

I arrived at Elstree Studios in Hertfordshire and visited Mel in her dressing room. ‘Ready for me?’ I laughed.

‘Are YOU ready for ME more like!’ she cackled. ‘Actually, I’m feeling a bit nervous.’

‘Relax,’ I replied, ‘I’m only going to get you sobbing like a baby and spilling all the beans about your sex life. Nothing to worry about…’

I later bumped into the other Spice Girl Melanie, Mel C. ‘I’ve come to offer support,’ she said. ‘I’m just not sure which one of you is going to need it more…’

I walked on and addressed my production team in the studio gallery: ‘The second-biggest ratings we’ve ever had for Life Stories came when I got Torvill and Dean to admit they once had a snog on the back of a bus. I’m not stopping tonight until I’ve got Mel to admit she and Geri once had a lot more than a snog.’

An hour into the interview, I went for the jugular. ‘There were rumours you and Geri were more than just good friends,’ I told Mel. ‘You had a little dabble?’

She stared at me, frozen in half-smirk silence for several long seconds.

‘No denial?’ I persisted.

‘She had great boobs,’ said Mel.

Mel B looked over desperately at Mel C, sitting among the audience.

‘I don’t know ANYTHING! This is all new to me…’ insisted Ms Chisholm, with a face that suggested she knew absolutely everything but couldn’t believe her friend was about to cough to it.

‘OH WHATEVER MELANIE!’ screeched Mel B, whose obvious squirming was all the encouragement I needed.

‘Did you or didn’t you with Geri Halliwell?’

‘Well what do you consider as doing it or not?’

This was like negotiating over Brexit – every tiny detail of clarification was of vital historical importance.

‘Did you sleep with her?’

‘Yeah, we all slept in a bed together but not “like that”.’

Mel fell silent again, then a cheeky grin appeared on her face and she nodded.

‘REALLY?’ I gasped, as my producer cried ‘OH MY GOD!’ in my ear and the audience exploded. ‘Yeah and I’ve said it now. All done. She’s going to kill me and so’s her husband.’

The camera cut to an open-mouthed Mel C.

‘Hopefully when Geri gets asked about it, she won’t deny it,’ Mel B continued, ‘because it was a fun thing.’

The rest of the interview – which airs on ITV in a few weeks – was almost as jaw- dropping, and yes, she also sobbed like a baby at one stage.

But the big moment was obvious.

Afterwards, I walked back into the gallery, and everyone started laughing and applauding. ‘Like the Mounties, I always get my Spice Girl lesbian women,’ I chortled.

Then I went to find both Mels in the green room. Mel B was frantically guzzling red wine. ‘Oh my GOD! What have you f****** done to me, Morgan?’ she roared.

‘You mean what have YOU done to YOURSELF?’ I replied.

Mel C just shook her head slowly from side to side. ‘This,’ she sighed, ‘is going to be… interesting.’

‘I’d better tell Geri,’ said Mel B, racing off to her dressing room.

She returned a few minutes later.

‘Yes,’ she giggled. ‘I texted her to say I’d told you we had a little thing together and she seems fine about it.’

‘Did you tell her exactly what kind of “little thing”?’

In fact, she’s so enraged by all the X-rated lesbian headlines, the whole Spice Girls comeback tour this summer is apparently in jeopardy. Blimey.

Today’s Mail on Sunday reveals that Mel and Geri had a YEAR-long romance, something my own sources tell me is closer to the truth than a one-night stand. 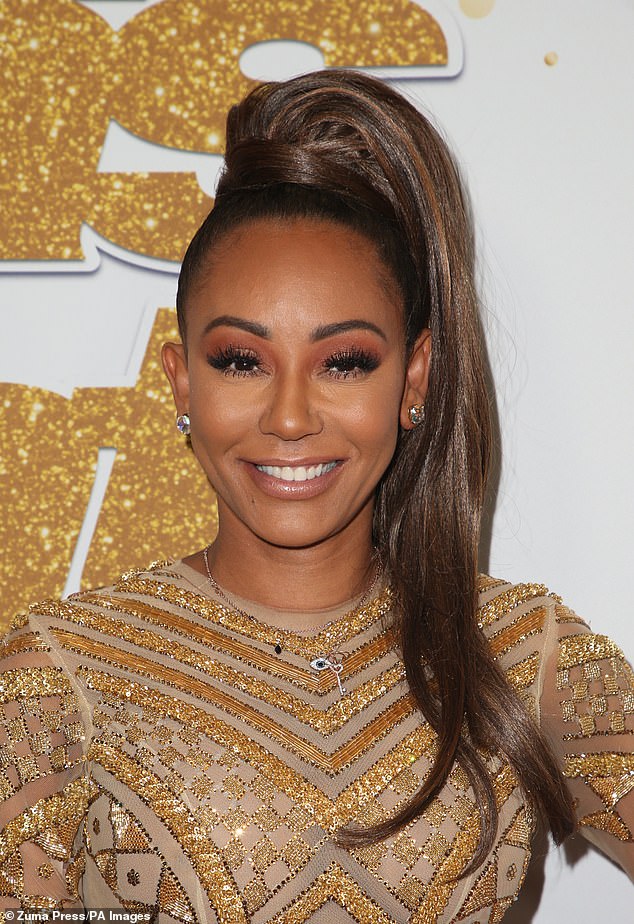 Mel B was frantically guzzling red wine. ‘Oh my GOD! What have you f****** done to me, Morgan?’ she roared. ‘You mean what have YOU done to YOURSELF?’ I replied

But Geri, finally breaking her silence, has done what Mel urged her not to do – and denied everything. Her spokesman said: ‘Geri would like fans to know that what has been reported recently is simply not true and has been very hurtful to her family.’

Wow. So she’s calling Mel B a liar.

For the record, I believe Mel.

Spice Girls tour rehearsals start next week. I’d rather buy tickets to watch those than the actual shows…