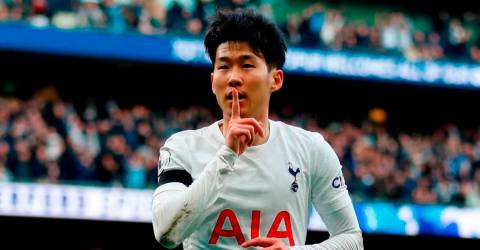 SEOUL: South Korea coach Paulo Bento has no plans to talk to Son Heung-min (pix) about his poor form after naming the Spurs forward in his squad Tuesday for crucial pre-World Cup friendlies.

South Korea host Costa Rica on September 23 and Cameroon four days later, with all three countries bound for the World Cup, which kicks off on November 20 in Qatar.

Bento named a 26-man squad as he attempts to nail down places for Qatar, where the Koreans are in Group H alongside his native Portugal, Ghana and Uruguay.

Son shared last season’s Premier League Golden Boot with Liverpool’s Mohamed Salah but the 30-year-old has made a slow start to the new campaign and is yet to score in seven games in all competitions.

“I feel the same (about Son)… I will not spend any time to talk about this kind of thing with him,“ Bento said, asked whether he was worried about his talisman’s goal drought.

Midfielder Lee Kang-in, who plays in Spain for Mallorca, returns to the squad for the first time in nearly 18 months.-AFP