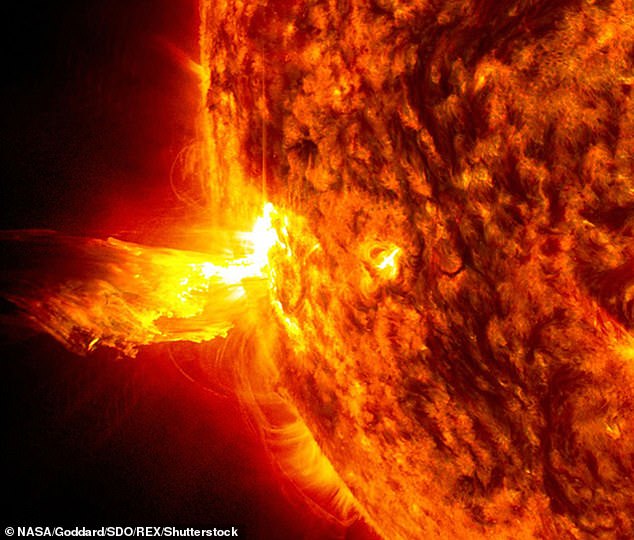 By Ian Randall For Mailonline

Members of the public acting as ‘citizen scientists’ have aided experts developing a new system for forecasting when potentially dangerous solar storms will hit Earth.

When they reach Earth, in as little as 15 hours, CMEs have the potential to damage electrical equipment — from orbiting satellites to ground-based energy grids.

A solar storm in 1859, for example — the ‘Carrington Event’ — induced such currents in telegraph wires that pylons sparked and operators received electric shocks.

Predicting when these storms occur could help governments and companies protect satellites, the power grid and communications infrastructure from surges.

Detecting weather in space is also important for safeguarding the health of astronauts — who can receive harmful doses of radiation if unshielded from storms.

‘CMEs are sausage-shaped blobs made up of billions of tonnes of magnetised plasma that erupt from the Sun’s atmosphere at a million miles an hour,’ said space weather researcher Luke Barnard of the University of Reading.

‘They are capable of damaging satellites, overloading power grids and exposing astronauts to harmful radiation. Predicting when they are on a collision course with Earth is therefore extremely important.’

But this, he explained, ‘is made difficult by the fact the speed and direction of CMEs vary wildly and are affected by solar wind, and they constantly change shape as they travel through space.’

The researchers used computer models to predict when solar storms will arrive at Earth, using analysis provided by members of the public involved in the ‘Solar Stormwatch’ citizen science project.

They said that their models are able to run up to 200 different simulations — compared to the 20-odd currently used by more complex models.

The researchers found their forecasts to be 20 per cent more accurate, providing improved estimates of the solar wind speed and its impact on CME movement.

When they reach Earth, in as little as 15 hours, CMEs have the potential to damage electrical equipment — from orbiting satellites to ground-based energy grids. Pictured, a CME as seen from either side of the Sun’s surface, captured by the two STEREO spacecraft. The red and pink lines represent the outlines as traced by citizen scientists

‘Solar storm forecasts are currently based on observations of coronal mass ejections as soon as they leave the Sun’s surface, meaning they come with a large degree of uncertainty,’ explained Dr Barnard.

‘The volunteer data offered a second stage of observations at a point when the CME was more established, which gave a better idea of its shape and trajectory.’

‘The value of additional CME observations demonstrates how useful it would be to include cameras on board spacecraft in future space weather monitoring missions.’

‘More accurate predictions could help prevent catastrophic damage to our infrastructure and could even save lives,’ he concluded.

The full findings of the study were published in the journal AGU Advances.

Solar storms, or solar activity, can be divided into four main components that can have impacts on Earth:

While these may seem dangerous, astronauts are not in immediate danger of these phenomena because of the relatively low orbit of manned missions.

However, they do have to be concerned about cumulative exposure during space walks.

This photo shows the sun’s coronal holes in an x-ray image. The outer solar atmosphere, the corona, is structured by strong magnetic fields, which when closed can cause the atmosphere to suddenly and violently release bubbles or tongues of gas and magnetic fields called coronal mass ejections

The damage caused by solar storms

Solar flares can damage satellites and have an enormous financial cost.

Very large flares can even create currents within electricity grids and knock out energy supplies.

When Coronal Mass Ejections strike Earth they cause geomagnetic storms and enhanced aurora.

A large influx of energy could flow into high voltage power grids and permanently damage transformers.

This could shut off businesses and homes around the world.