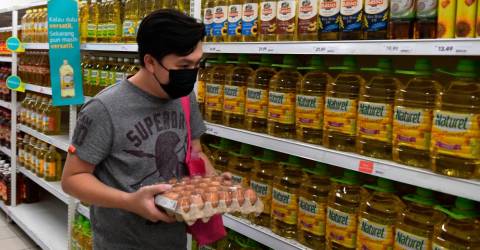 PUTRAJAYA: The latest report on the supplies of one kilogramme (kg) cooking oil packets, chicken and eggs in the market will be presented at the Jihad Against Inflation Special Task Force meeting tomorrow, said Minister in the Prime Minister’s Department (Economy) Datuk Seri Mustapa Mohamed.

Mustapa who is part of the team, said the report to be presented by the Ministry of Domestic Trade and Consumer Affairs was important because the issues had been raised by the people, especially in relation to supplies.

“When we made our rounds, some shops did not have any supply of cooking oil packets.

“Tomorrow we expect to receive an update on the situation, more importantly the actions that have already been taken and if they are effective in ensuring there are supplies and prices (do not exceed the ceiling price),” he told the media after opening the first Richiamo Coffee kiosk here today.

The Cabinet Meeting on June 29 agreed to form a Special Task Force on Jihad Against Inflation whose role was to gather all information from ministries, agencies and the public, to resolve issues relating to inflation, especially in controlling price hikes more efficiently and effectively.

In its first meeting on June 30, among issues raised were the lack of supply of the one-kg cooking oil packets, the problem of middlemen and cartels in determining the price of essential goods in the market.

Meanwhile, Richiamo Coffee group managing director Muhamad Zamry Abu Samah said another 30 kioks would be opened nationwide within the next two months, bringing the total number of Richiamo Coffee outlets to 135 by August.

Richiamo Coffee is a local brand that started operations in 2015 and to date there are 105 outlets nationwide. — Bernama