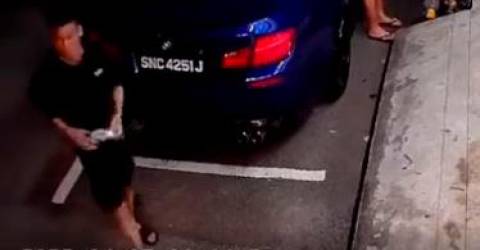 A driver with a Singapore-registered BMW was captured on CCTV footage urinating into the drain beside some shoplots, in a video shared on Facebook by The Persatuan Bangsa Johor.

“Come here and make problems,“ they wrote, referring to the motorist’s actions. “Peeing on the side of the road. Is he watering the plants or staking out his territory?”

After the video went viral on social media, netizens were quick to condemn the motorist, with many labelling him a disgrace. They flocked to the comments section to criticize his heinous behaviour.

“Straight up left his brain in Singapore when he came here,“ added another.

Many mentioned that by behaving in this manner, he is simply adding to the terrible reputation of unattractive Singaporeans in Malaysia.

What do you think of the man’s actions?