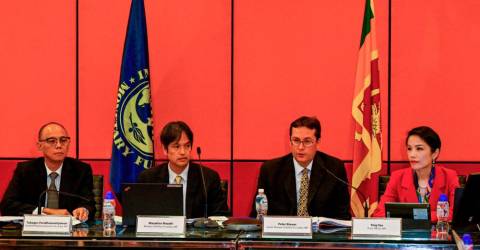 NEW DELHI: Sri Lanka has reached an initial agreement with the International Monetary Fund (IMF) to receive US$2.9 billion in funding to overcome its crippling financial crisis.

The objectives of Sri Lanka’s new Extended Fund Facility (EFF)-supported 48-month programme are to restore macroeconomic stability and debt sustainability, the IMF said in a statement on Thursday.

The staff-level agreement was reached after talks between an IMF mission led by senior officials Peter Breuer and Masahiro Nozaki and the Sri Lankan authorities, including President and Finance Minister Ranil Wickremesinghe, Prime Minister Dinesh Gunawardena and Central Bank of Sri Lanka (CBSL) governor P. Nandalal Weerasinghe, in Colombo from Aug 24 to Sept 1.

“The agreement is subject to the approval by IMF management and the Executive Board in the period ahead, contingent on the implementation by the authorities of prior actions, and on receiving financing assurances from Sri Lanka’s official creditors and making a good faith effort to reach a collaborative agreement with private creditors,“ the IMF said.

“Debt relief from Sri Lanka’s creditors and additional financing from multilateral partners will be required to help ensure debt sustainability and close financing gaps,“ it added.

Sri Lanka defaulted on its external debt earlier this year and has been facing a critical shortage of foreign exchange to import basic necessities such as fuel and medicines.

“The economy is expected to contract by 8.7 per cent in 2022 and inflation recently exceeded 60 per cent. The impact has been disproportionately borne by the poor and vulnerable,“ the IMF noted. – Bernama