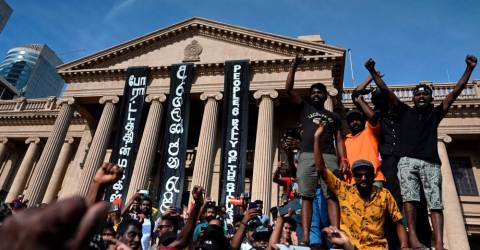 COLOMBO: The resignation of Sri Lanka’s president has been accepted, the crisis-hit country’s parliamentary speaker announced today, after Gotabaya Rajapaksa fled the country earlier this week and notified him from Singapore that he was stepping down.

“I have accepted the resignation.”

Under Sri Lanka’s constitution, Prime Minister Ranil Wickremesinghe — whose departure is also being demanded by protesters — will automatically become acting president until parliament can elect an MP to succeed Rajapaksa for the rest of his term.

The legislature will be summoned tomorrow, Abeywardana told reporters at his residence.

“I hope to complete the process of electing a new president within seven days,” he said. “I seek the cooperation of all concerned to complete the constitutional requirements.” — AFP