The Prime Minister’s father says that the family have banned all talk about Brexit from the festive dinner table.

‘This year we’re not going to talk about Brexit,’ he told The Times. ‘We’re deeming Brexit to be done. The focus of attention will be to get to 3pm without major disputes and to turn the radio on and listen to Her Majesty.’ 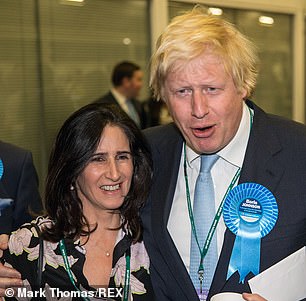 Stanley (pictured, left) will be spending Christmas with Marina Wheeler (right, with Boris) and the former couple’s four children

A family friend said that the Johnsons have ‘enormous sympathy’ for Wheeler, adding: ‘They will be getting together first with Marina and the grandchildren rather than Boris and the new lady.’

The family was famously split on the 2016 referendum as Boris became a leading voice in the leave campaign.

His sister, Rachel, later ran to be an MEP for the pro-remain Change UK and his brother, Jo, the former MP for Orpington, resigned after arguing for a second referendum.

Stanley voted remain too but proudly read a text message proclaiming of the general election: ‘The Johnson DNA does it again!’

The father of nine believes his family represent the division about Brexit across the country.

He said: ‘In my own family, I think with Rachel, she is a remainer but out of respect for [Thursday] night and loyalty to her brother she will now buy into it. There is a hope of families coming together now — partly because of weariness [about Brexit].’ 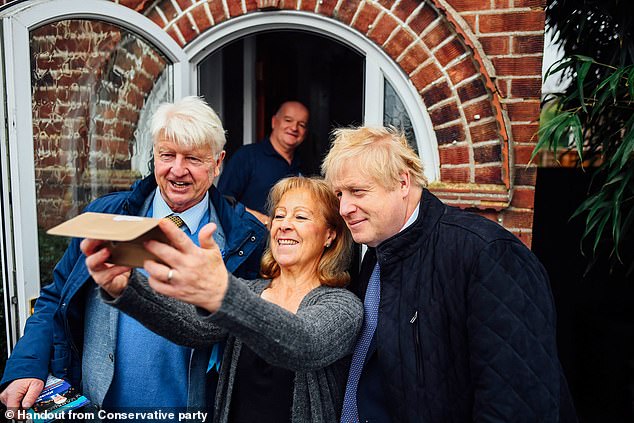 Unlike other members of his family who are happy to fade into the background, Stanley is bombarded by people asking him for selfies at the Langham hotel in central London,

He told the paper that it’s important to use publicity for a purpose, with the Extinction Rebellion supporter’s main passion being the environment.

The former MEP is no afraid to wade into politics and says that the nation’s top priority must be improving relations with the EU.

And he is full of praise for Carrie Symonds and the environmental work she has undertaken.

He campaigned with the prime minister’s girlfriend to stop Japanese whaling, but will not confirm whether rumours that she wants to have children with Boris are true.

Stanley did reveal that unlike his son he came close to stopping at two and was in line fora  vasectomy.

He was in Calcutta in the 1960s when he decided to seek the treatment, but was baffled to be handed a piece of paper reading: ‘You are certifying that you have had this operation and you have received a transistor radio and 40 rupees.’ Stanley decided not to proceed with the matter.