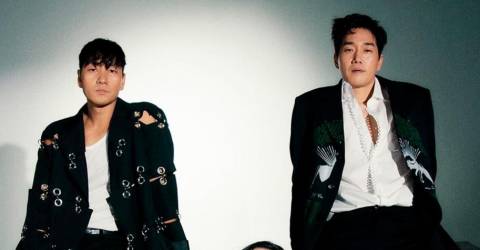 THE highly-anticipated South Korean remake of the Spanish action-thriller series Money Heist made its Netflix debut last week, and already has become one of the most streamed series worldwide.

Money Heist: Korea – Joint Economic Area follows an anonymous squad of robbers who join forces for an ambitious, large-scale heist on the fictional Unified Korean Mint. Yoo stars as the Professor, the mastermind behind the operation, while his star-studded crew of robbers includes Park (who goes by the name Berlin) and Jeon (known as Tokyo).

Describing one of the biggest differences between the original series and the Korean remake, Yoo told Elle: “Two seasons’ worth of plot from the original version were condensed into just 12 episodes [for our remake]. There’s no exposition for exposition’s sake, and we only deliver the key plot points as necessary. There’s a certain pleasure that comes from the fast-paced plot development.”

For Park, he admitted to feeling the pressure of playing Berlin, a fan-favourite character in the Spanish original. He explained for his interpretation: “Although Berlin is a fictional character, you could see him as a sort of metaphor for the situation between North Korea and South Korea, which makes his story even more forlorn.”

Jeong revealed what she thought were the strengths of the remake. “[The drama] does a great job portraying the near future,” she told Elle. “The North Korea-South Korea situation adds an element of tension and suspense, and it also bears the meaning of unity. This two-sided situation completely fills up the background setting of the Mint.”

The first six episodes of Money Heist: Korea – Joint Economic Area are currently on Netflix, with the remaining six episodes to premiere at an unspecified date.