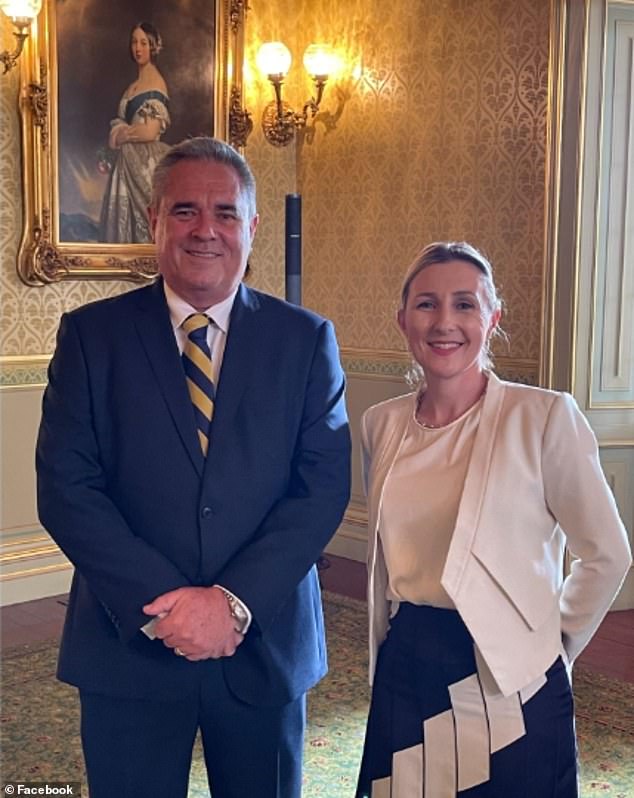 He was appointed after meeting with then-Treasury secretary Mike Pratt to discuss his chances of securing the role back in February, 2021.

Stephen Cartwright (left) met with the then-Treasury secretary Mike Pratt to discuss his chances of securing the role of Agent-General in the UK in February, 2021

Despite there already being a preferred candidate for the role whose salary negotiations were already underway, Mr Cartwright was put forward by Mr Pratt.

Mr Cartwright negotiated a salary of $600k a year, $200k less than what he had asked for, but enough to employ a full-time cleaner for a new home in London’s CBD.

It was also the largest salary ever allocated to a NSW trade commissioner.

But just one year into his role in March 2022, he complained to then trade minister Stuart Ayres that his pay was insufficient and that ‘something has to be done’. 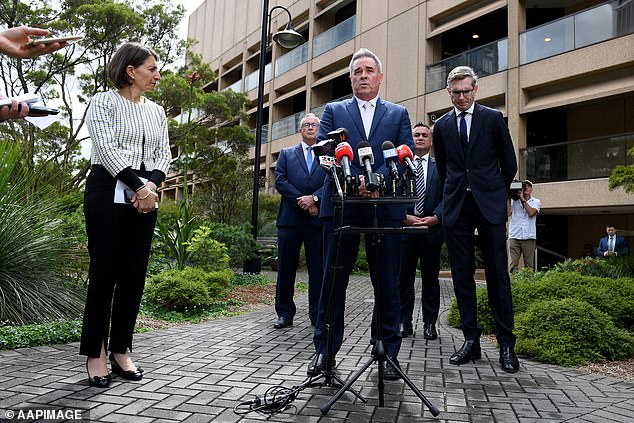 Mr Cartwright (pictured in March, 2020) ultimately negotiated a salary of $600k a year, $200k less than what he had expected but enough to employ a tax-payer funded cleaner

In leaked WhatsApp messages, Mr Cartwright told Mr Ayres he couldn’t afford to bring his wife and five children to the UK.

‘All other AGs and Fed Govt execs have rent, car and school fees covered by their govt,’ he wrote in messages seen by the Sydney Morning Herald.

He went on to list some entitlements comparable representatives from other Australian states were getting for their roles overseas.

He then declared that he would have to consider his future in the job if the requests for perks could not be met. 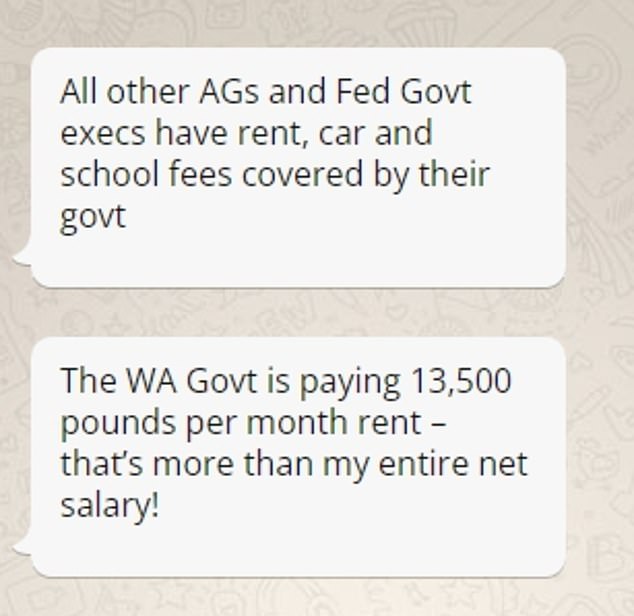 In March of this year, Mr Cartwright wrote to Stuart Ayres that his pay, which was the largest salary ever allocated to a NSW trade commissioner was insufficient (pictured, mocked-up texts) 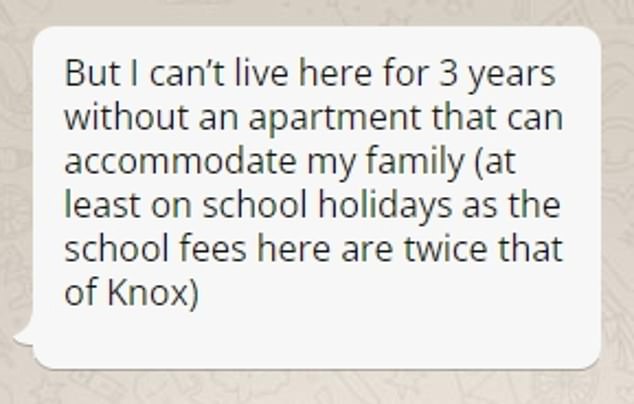 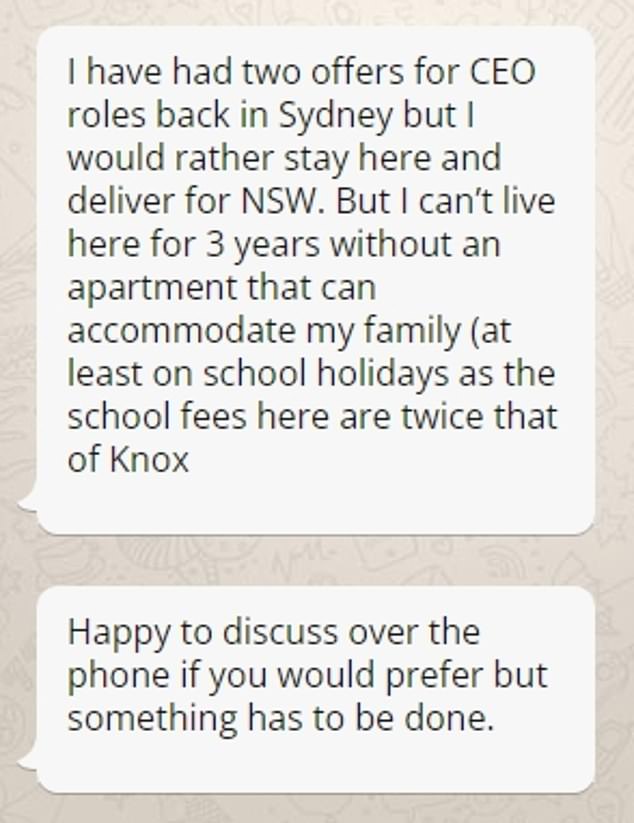 Mr Cartwright told Mr Ayres he had ‘other CEO roles’ available to him in Sydney but that he would rather represent NSW overseas (pictured, mocked-up WhatsApp messages)

‘I have had two offers for CEO roles back in Sydney but I would rather stay here and deliver for NSW. But I can’t live here for 3 years without an apartment that can accommodate my family (at least on school holidays as the school fees here are twice that of Knox),’ he wrote.

‘Happy to discuss over the phone if you would prefer but something has to be done.’

The revelations come as a parliamentary inquiry examining the recruitment process of overseas-based trade positions continues. 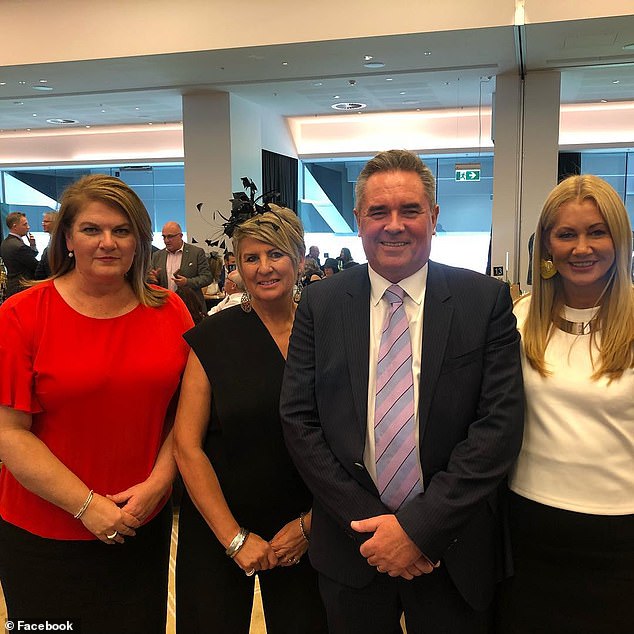 In leaked WhatsApp messages sent to Mr Ayres one year into his new role, Mr Cartwright (pictured) said he couldn’t afford to bring his wife and five children to the UK

The inquiry’s attention has focused on deputy premier John Barilaro’s appointment to a cushy New York based position.

It also expanded its scope to include other overseas positions, including Mr Cartwright’s appointment to the London role.

Marianne Broadbent, the managing partner of NGS Global, which ran the recruitment for the roles, told the inquiry another candidate for the London posting, Paul Webster, was seen as a more suitable candidate until February 2021 before the job went to Mr Cartwright.

‘Perhaps unadvisedly I use the term massaging to describe that process,’ she said, referring to spruiking Mr Cartwright’s credentials in emails released to the committee.

The inquiry heard that Mr Pratt had asked Dr Broadbent to allow Mr Cartwright to apply for the position.

Ms Broadbent told the inquiry she had been advised to consider Mr Cartwright but that she hadn’t been informed of any conversations between the then-Treasury secretary and the candidate.

Dr Broadbent also confirmed that Mr Cartwright told her he had been encouraged to apply at the behest of Mr Barilaro, who was then deputy premier, and had also spoken with then treasurer and now premier Dominic Perrottet.

Scrutiny over the recruitment process for the taxpayer-funded US trade role prompted the resignation of Mr Ayres from cabinet following a draft report by former Public Service commissioner Graeme Head, which found he was not at arm’s length.

The full report, released on Tuesday, prompted Mr Perrottet to announce bans on ministers taking up public sector jobs related to their portfolios for 18 months after they leave office.

The ministerial code of conduct will also be amended to prevent ministers seeking to influence departmental secretaries.