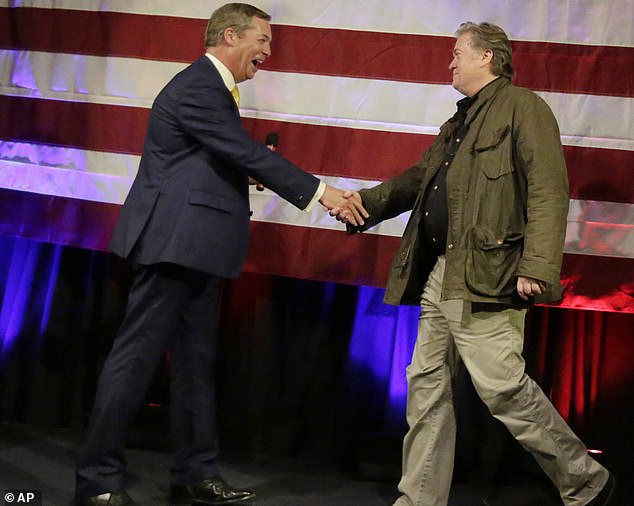 For years, Steve Bannon had his hands on the levers of power as Donald Trump‘s campaign manager and one of his top White House advisers.

But across the Atlantic, he was also wading into another political earthquake after the UK defied expectation and voted for Brexit.

A friend of Nigel Farage and a cheerleader of Boris Johnson, Bannon has championed the Leave movement in Britain and Eurosceptic parties on the march across the continent.

The extent of Bannon’s involvement in the historic 2016 vote remains murky and he has long been dogged by links to consultancy firm Cambridge Analytica.

The now-defunct firm has been accused of harvesting Facebook data and working with Leave.EU, the non-official Out campaign bankrolled by Ukip donor and Farage ally Arron Banks.

Bannon, who has since distanced himself from the company after co-founding it with billionaire hedge fund manager Robert Mercer and served as its vice president from 2014 to August 2016 when he joined the Trump campaign. 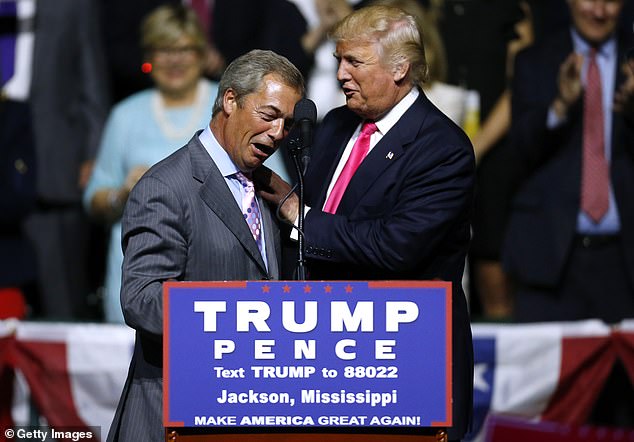 Bannon is believed to have brought the Brexiteer into the Trump campaign in 2016, when Mr Farage spoke at a rally (picture) and provided coaching ahead of the presidential debates 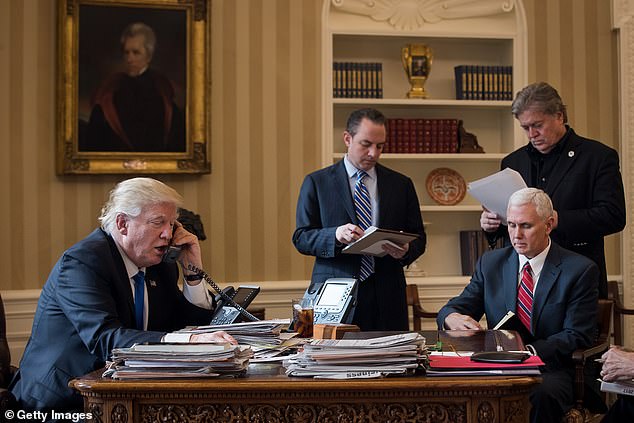 For almost two years, Steve Bannon had his hands on the levers of power as Donald Trump’s maverick White House adviser (pictured far right, in the Oval Office)

Email chains purport to link Leave.EU with Cambridge Analytica, but the data firm has denied wrongdoing.

Bannon has since continued his pro-Brexit enthusiasm, cementing alliances with like-minded figures such as Mr Farage.

He is believed to have brought the Brexiteer into the Trump campaign in 2016, when Mr Farage spoke at a rally and provided coaching ahead of the presidential debates.

The pair were filmed together for a documentary discussing the idea of a pan-European populist movement, fronted by Mr Farage.

In the 2017 clip, they both heap praise on Boris Johnson and discuss the possibility of him becoming prime minister.

When Mr Johnson finally did enter Number 10 in July last year, Bannon was quick to throw his weight behind his leadership.

Burnishing his Eurosceptic credentials in a BBC interview, he said: ‘Here we are three years later on from Brexit and you’re still not out.

‘And now you have a hard deadline on October 31st. I think it was inevitable that someone like Boris would actually come to the forefront and become Prime Minister.

‘Boris is a very savvy guy and he’s thought about this for a long time.’

In the same interview, he underscored his close relationship with Mr Farage, who he claimed he spoke to regularly.

Touting an alliance between the Brexit Party and the Conservatives, he said: ‘People have got to remember that Nigel Farage is the only individual in political history in England who has won two national elections, with entities he kind of created himself.’

In an interview for a new book, he said: ‘A brilliant guy. I think Cummings is very smart where he puts his efforts.

‘What I like about him is he has the ability to focus on the main things.’

Today, federal prosecutors alleged that Bannon and three others ‘orchestrated a scheme to defraud hundreds of thousands of donors’ in connection with an online crowdfunding campaign that raised more than £19million to build a wall along the southern border of the United States.

According to the indictment, Bannon promised that 100 per cent of the donated money would be used for the project, but the defendants collectively used hundreds of thousands of dollars in a manner inconsistent with the organisation’s public representations. 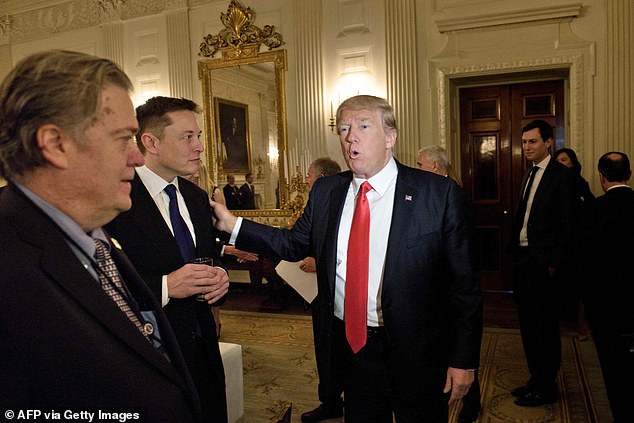 Steve Bannon watches as US President Donald Trump greets Elon Musk, SpaceX and Tesla CEO, before a policy and strategy forum with executives in the State Dining Room of the White House February 3, 2017

The indictment said they faked invoices and sham ‘vendor’ arrangements, among other ways, to hide what was really happening.

We Build The Wall originally promoted a project for three miles of fence posts in south Texas that was ultimately built and largely funded by Fisher Industries, which has received about two billion dollars (£1.5 billion) in funding for wall contracts.

Mr Trump recently criticised that section of wall after it showed signs of erosion, saying it was ‘only done to make me look bad’, even though it was built by his supporters.

Bannon led the conservative Breitbart News before being chosen to serve as chief executive of Mr Trump’s campaign in its critical final months, when he pushed a scorched earth strategy that included highlighting the stories of former president Bill Clinton’s accusers.

After the election, he served as chief strategist during the turbulent early months of Mr Trump’s administration.

The blunt-spoken, combative Bannon was the voice of a nationalistic, outsider conservatism, and he pushed Mr Trump to follow through on some of his most contentious campaign promises, including his travel ban on several majority-Muslim countries.

But Bannon also clashed with other top advisers, and his high profile sometimes irked Mr Trump.

Bannon, who served in the navy and worked as an investment banker at Goldman Sachs before becoming a Hollywood producer, has been hosting a pro-Trump podcast called War Room that began during the president’s impeachment proceedings and has continued during the pandemic.

The man who made Donald Trump president: How Steve Bannon led stunning 2016 victory and started shock-and-awe populist attack on the deep state – but lost his White House role in knife-fight with Javanka and now faces losing his freedom

Steve Bannon, who was arrested on a boat in the Long Island Sound Thursday, helped conceive Donald Trump’s populist campaign message – only to fall out of favor and get indicted for allegedly pocketing thousands from fervent believers in a border wall.

His fall now is criminal – but he had already crashed out of the White House after falling foul of Jared Kushner and Ivanka Trump, with the internecine feud ending in his abrupt departure in August 2017 which left him on the outer fringes of Trump-world

Bannon, now 66, was a shadowy and influential figure in Trump’s 2016 campaign, where the president systematically went after his primary opponents, clashed with Republican Party elites, inveighed against China and global trade, and framed a populist appeal to ‘forgotten’ Americans.

He had informally advised Trump before jumping on board from the conservative Breitbart website, which was backed by billionaire Rebekah Mercer. 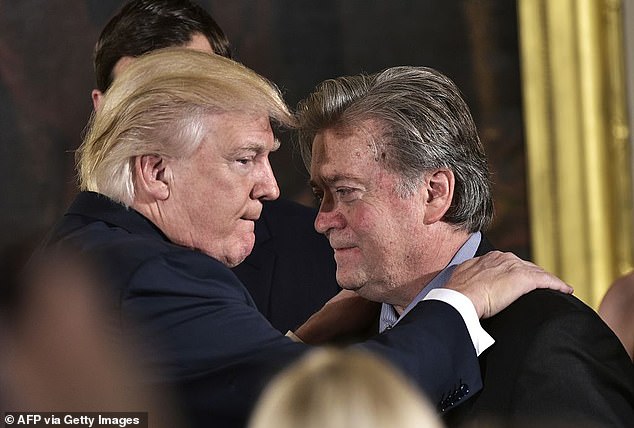 He installed himself at the center of it, as CEO, but that set up a clash which would prove fatal: the other power center was Jared Kushner and Ivanka Trump, who Bannon sneeringly named Javanka.

They co-operated for the 88 final days of the campaign with Bannon in charge, but the seeds of a toxic fall-out were sown because it was clear that in Trump-world, there were aides, and there was family.

After his stunning election win over Hillary Clinton, Trump brought Bannon to the White House as his chief strategist, where sketched out early Trump agenda items on a white board.

But after it was revealed he had been cooperating with Michael Wolff in his scathing Trump takedown, ‘Fire and Fury,’ the president fired him.

Not only had Bannon consented to on-record interviews, he took aim at Trump family members, including Donald Trump Jr.

He called the infamous 2016 Trump Tower meeting about dirt on Hillary Clinton that was attended by Trump Jr., Paul Manafort, and Trump son-in-law Jared Kushner ‘treasonous’ and ‘unpatriotic.’ He predicted of authorities: ‘They’re going to crack Don Jr. like an egg’ – something which did not happen.

Wolff reported in 2018 that Bannon told investigators: ‘Even if you thought that this was not treasonous, or unpatriotic, or bad sh**, and I happen to think it’s all of that, you should have called the FBI immediately.’

Trump in characteristic fashion distanced himself with Bannon after throwing him overboard.

‘Steve Bannon has nothing to do with me or my presidency’ Trump said at the time. ‘When he was fired, he not only lost his job, he lost his mind.’

Bannon has eclectic interests and took an unusual path to power outside of the normal channels. He served seven years in the Navy, serving aboard a destroyer. He attended Harvard business school and landed a job at Goldman Sachs.

In one of his best early bets, he helped talk a firm during a purchase into taking a percentage of ‘Seinfeld’ earnings, earning his own percentage on reruns.

He co-founded Breitbart News, calling it ‘the platform for the alt-righ,’ and helped use it to blast political enemies like the Clintons while building up conservatives.

He also delved into Hollywood filmmaking and made a documentary about Ronald Reagan.

On the campaign, he had the unusual title of Chief Executive Officer, which reflected his role as a strategizer who sought to develop a candidacy based on historical currents he perceived.

After he was out at the White House, Bannon was subpoenaed by Special Counsel Robert Mueller’s investigators who were probing Trump campaign contacts with Russians.

He reportedly met with them for 20 hours, speaking on multiple occasions, and his assessments are reflected in the Mueller report.

Trump minimized his contact with Bannon in comments at the White House Thursday, downplaying his time as an advisor with an office close to the Oval Office – just as he had when he fired him.

‘I haven’t been dealing with him for a very long period of time,’ Trump told reporters, when asked about the indictments – just the latest to bring one of his key associates into a legal quagmire.