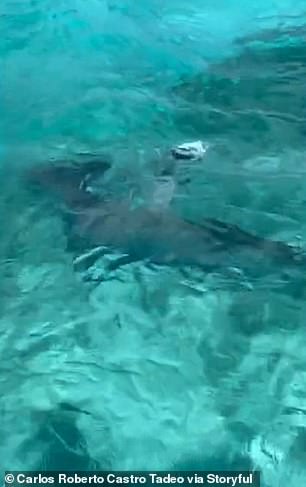 By Lizzie May For Mailonline

A stingray leaps into the air as it tried to escape a hammerhead shark in shallow waters, in dramatic footage shot from a boat off the coast of Mexico.

Stunned onlookers looked on as the shark chased its prey under their boat off Isla de las Golondrinas, Cozumel, Mexico, on April 15.

Carlos Roberto Castro Tadeo, a diver who recorded the chase, revealed that the stingray was eventually eaten by the shark.

He revealed that the water was less than seven feet deep and boat’s captain had ‘never seen a hammerhead shark in water as shallow’ in his 30 years of experience.

He said he thought the hammerhead had driven the ray into the shallows from deeper water.

Mr Tadeo said: ‘We were on a boat sailing the area known as Cielito quite far from the shore when we saw a Hammerhead Shark that was chasing a stingray!

‘They passed right under our boat and we were all impressed.’

In the video, one of the young women asks those on board if there is anything that could be done to help the stingray, with her companions saying no since it was a natural process, according to The Yucatan Times.

The group were enjoying the beautiful views off the Mexican coast, where the shallow waters were completely clear, before they noticed something leaping out of the sea. 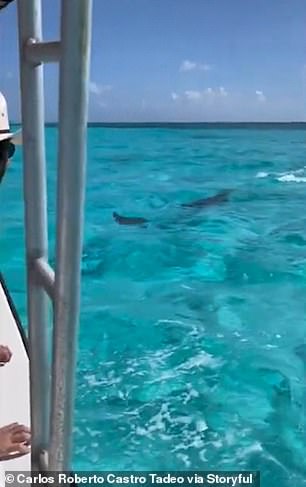 This is the incredible moment a hammerhead shark chased a stingray through shallow waters off the coast of Mexico. Stunned onlookers from a boat off Isla de las Golondrinas, Cozumel, Mexico, on April 15 watched in awe as a speedy hammerhead hunted down a stingray which dashed through the water to try and save itself 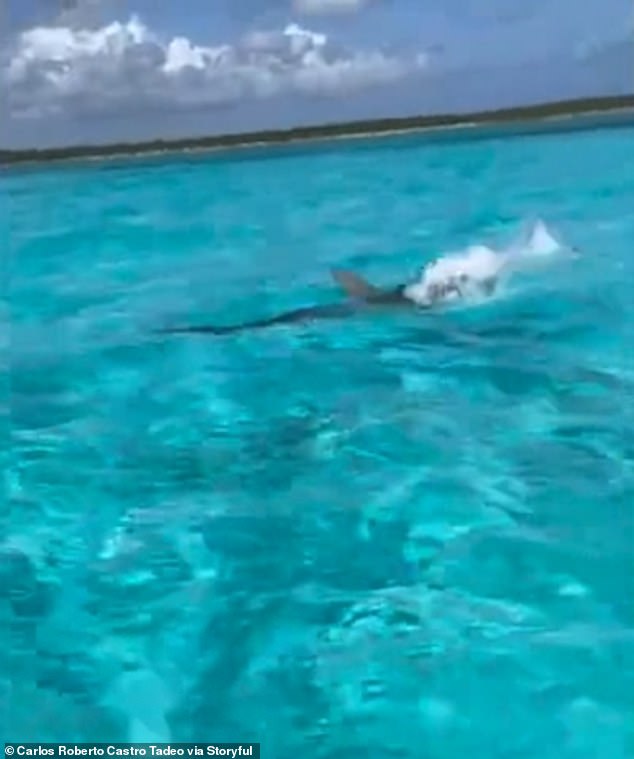 They were said to have initially thought it was a dolphin but quickly realised that they were witnessing something quite unique after the sea animals got much closer.

Diver Tadeo said that the shark tore off the stingray’s tail and ate it, which he decided not to record as there was ‘a lot of blood’.

The once-in-a-lifetime sight the group, which also included Ana Arana Martin, Andres Maillard and Meybol Nataly, witnessed was captured in El Cielito, not far from El Cielo, which is an area popular for the large number of starfish.

The coast of Isla de las Golondrinas sees many stingrays but not hammerhead sharks.