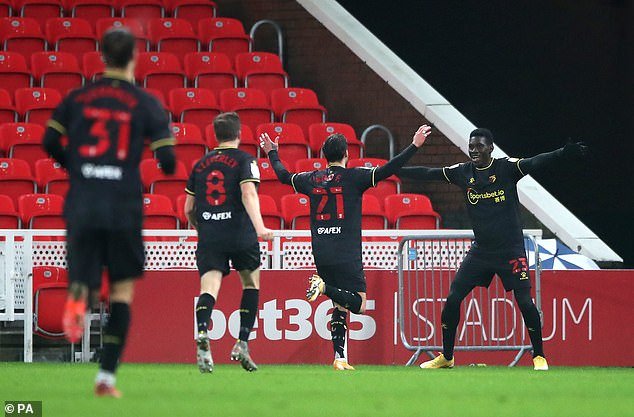 Stoke City 1-2 Watford: Ismaila Sarr shines and gets the winner after Troy Deeney scores from the penalty spot for the visitors while Steven Fletcher netted in vain for The Potters

By Lewis Steele For The Daily Mail

Ismaila Sarr was targeted by Liverpool in the summer and demonstrated why last night as he shone in Watford’s 2-1 win at Stoke.

The Senegalese showed exactly what the Premier League champions are missing right now: the ability to unlock a stubborn defence and clinical finishing in the box.

He danced through Stoke in the build-up to the opener and added another minutes later to hand Xisco Munoz’s men a fourth win in his five league games in charge. 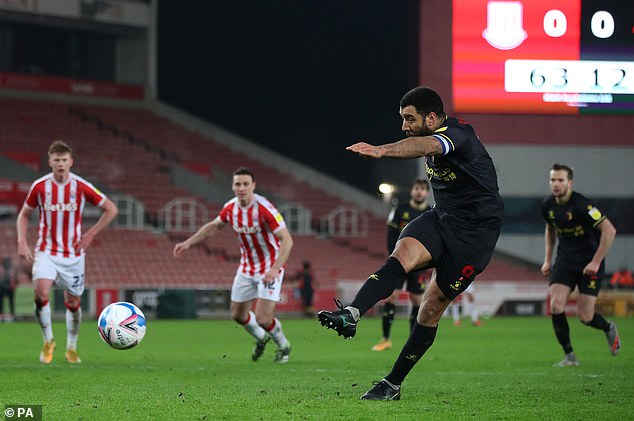 Both teams had changed formation from midweek and both gave off an aura in the first half that they were rather unsure of themselves and reluctant to throw too many men forward.

It led to a drab opening 30 minutes and neither goalkeeper was called into action until the half-hour mark when Watford midfielder Nathaniel Chalobah forced Joe Bursik into a strong save after a powerful left-footed shot.

From the resulting corner, Watford had a strong case for a penalty when Rhys Norrington-Davies wrestled Adam Masina to the floor. There was nothing doing for referee Oliver Langford, though replays showed a spot-kick probably should have been awarded. 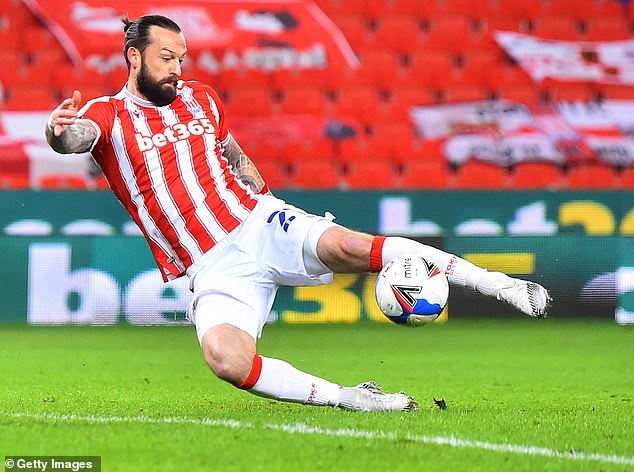 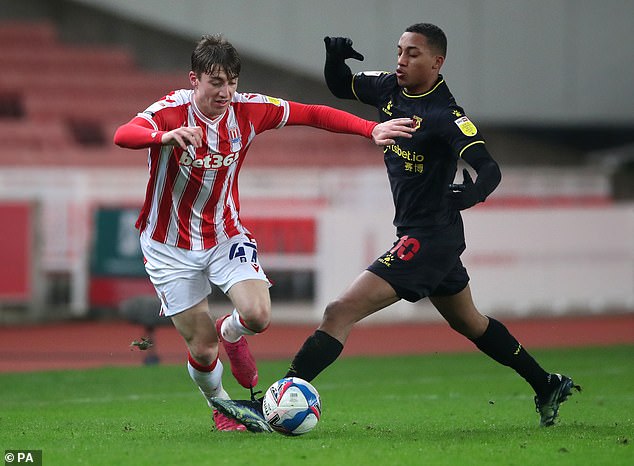 At the other end, Sam Clucas volleyed a shot over. Stoke had the territorial advantage without testing goalkeeper Daniel Bachmann, who is deputising for the injured Ben Foster.

Potters boss Michael O’Neill handed a first Championship start to Jack Clarke. The winger was playing his first game at this level since a scary incident saw him collapse on the substitutes bench after being substituted at half-time for Leeds at Middlesbrough.

Before that, he had sparkled for Marcelo Bielsa’s side and earned himself a move to Tottenham but he has failed to make any serious impression on Jose Mourinho’s first-team plans. He showed glimpses of talent here and he will improve as his confidence recovers.

After a quiet first half, though, Bachmann needed to be in fine form to deny Joe Allen on 51 minutes, the Welshman arriving late into the box and firing a shot goalwards, only for the Austrian goalkeeper to show excellent reflexes and make the save.

As the game reached the hour mark, one felt that it was going to take a moment of genius to open up either of the well-marshalled, stubborn defences.

That moment came through Tom Cleverley and Sarr who exchanged quick-fire passes in a tight area before the latter broke through and was smothered by Joe Bursik. But Bursik failed to keep a hold of the ball – Joao Pedro nicked in and was fouled by the goalkeeper.

Troy Deeney stepped up and gave Bursik no chance with a powerful penalty.

Minutes later, Deeney turned provider and threaded through a perfectly-weighted pass to Sarr, who took a touch and fired across Bursik for 2-0.

But Stoke showed fight and, on 83 minutes, pulled one back through Steven Fletcher, after the forward latched on the end of Joe Allen’s dinked through ball and slotted past Bachmann.

The Potters threatened and Nick Powell might have done better when, unmarked in the box, he failed to connect with Rabbi Matondo’s cross, shooting high and wide.

Harry Souttar also could have scored with a late header but failed to hit the target.

It was a scrappy three points but that will delight Xisco, who now has four wins from his first five league games at the club.