She was crowned the winner of the hit BBC One dance series in 2018.

And reigning champion Stacey Dooley showed her support to the Strictly Come Dancing 2019 finalists on Saturday night as she sat in the audience.

The documentary maker, 32, will have also of been cheering on her boyfriend and former professional dance partner Kevin Clifton who performed in the opening group number.

Supportive: Reigning champion Stacey Dooley showed her support to the Strictly Come Dancing 2019 finalists on Saturday night as she sat in the audience with fellow 2018 contestant Joe Sugg

Just hours before, Stacey took to Instagram Stories to cheer on the remaining three couples, as she threw her support behind Karim Zeroual and Amy Dowden.

The star is now dating her professional partner Kevin, who was eliminated from this year’s Strictly in Week Two alongside presenter Anneka Rice. 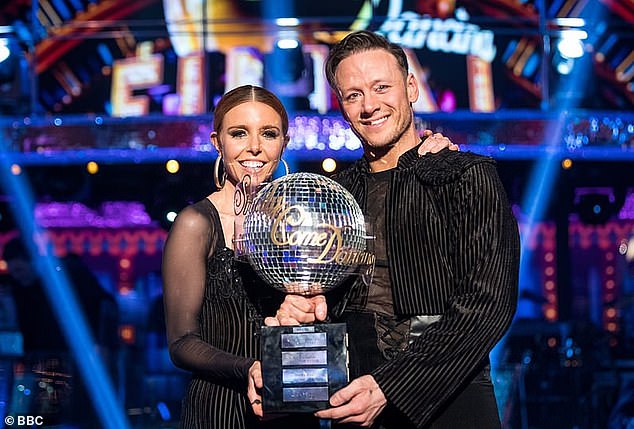 Champions: The documentary maker, 32, will have also of been cheering on her boyfriend and former professional dance partner Kevin Clifton who performed in the opening group number (pictured after their win in 2018)

Posting a video from backstage at her latest TV project, Stacey said: ‘Very very good luck to the finalists of Strictly, I will be cheering you all on. Enjoy it, just soak it up. I can’t believe it’s been a year!’

Blowing a kiss to the camera Stacey clearly shared her support for pro Amy, as she said: ‘Also… go on Amy,’ while tagging the Welsh pro.

Battling it out on the dance floor on Saturday night for the coveted Glitterball are Kelvin Fletcher, Karim Zeroual and Emma Barton.

Stacey’s support comes after the Strictly Come Dancing Glitterball trophy had reportedly fallen apart just days before the show’s final with bosses fearing it is cursed.

According to the Daily Star, the trophy began to shed its mirrored pieces shortly after the remaining celebrities arrived in studio ahead of Saturday’s show.

It could spell disaster for the final as the winners always pose with the Glitterball at the end of the show.

A source told the publication: ‘Strictly’s known for its curses with romances and now we have a new one.’

A representative for Strictly Come Dancing declined to comment when contacted by MailOnline.

The Glitterball trophy has previously caused trouble for show bosses in the past after last year’s winner Stacey Dooley lost it just hours after she won.

Among the excitement of winning the show with Kevin Clifton, the TV presenter misplaced the trophy at the show’s afterparty.

This Morning’s Dr Ranj Singh told how Stacey misplaced the trophy at the bash and had to text her fellow Strictly contestants in their WhatsApp group to see if any of them had seen it.

Speaking on The Telegraph’s Talking Strictly podcast, he said: ‘Here’s a little secret… so after the after party, I may have snuck a picture with Stacey’s trophy.

‘Then there was a message on the WhatsApp group yesterday saying, “Has anyone seen my trophy? I left it in the room with all the bags and now I can’t find it”.’

Dr Ranj said he replied to Stacey by saying: ‘And I was like, “I definitely didn’t take it home”.’

The doctor was then asked: ‘You didn’t leave it in the cab did you?’ but insisted: ‘No… I was like, “How many drinks did I have?”.’

The couples will all perform three dances during the show in a bid to impress the judges and win over viewers.

Oti recently admitted that she’s been ‘sobbing’ in the training room as her time performing with Kelvin comes to an end.

The Emmerdale actor will be joining the Strictly tour in early 2020, but will instead perform with pro Janette Manrara.

Speaking on The Zoe Ball Breakfast Show on BBC Radio 2, Oti admitted she was overcome with emotion as she and Kelvin near the end of their time together.

She said: ‘I got a little bit emotional when we were going through our choice dance and I was teaching him and my eyes were just sobbing. But it’s been amazing.

‘The whole week has been about appreciating and being grateful for the fact that we made it to the final.’

The Strictly Come Dancing continues on BBC One.