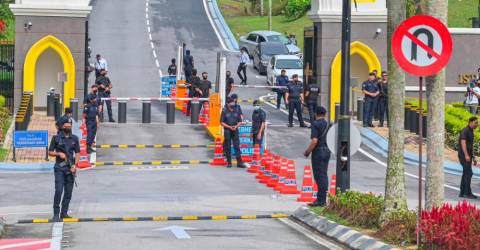 Kuala Lumpur police chief Datuk Azmi Abu Kassim when contacted said the task of tighter control was to ensure that official affairs of the Istana Negara, including the summoning of political party leaders and high-ranking government officials, ran smoothly without any disruption.

Commenting on policemen carrying firearms at the gate 2 compound, Amihizam said it was a standard operating procedure to carry firearms to enforce public order.

Meanwhile, a Bernama sweep at Gate 1, Gate 2 and Gate 3 of Istana Negara found that it is been closely guarded by police since early this morning, with a Bernama survey showing an increase in the number of armed policemen guarding the entry and exit route to Gate 2 of Istana Negara, compared to yesterday.

At the same time, a Light Strike Force team was seen deployed in a state of readiness.

The situation at Gate 1 is also under control but not taken lightly, as strict control continues to be carried out by police on duty even though only a glimpse of the media was seen as early as 9am today.

The security aspect has also been updated from today where media personnel who want to enter the area are required to register at the police roadblocks.

In MELAKA, police mounted SJRs in several strategic locations in the state on a 24-hour basis to ensure public safety and order.

“The identified locations involve two in Melaka Tengah district and one each in Jasin and Alor Gajah. However, the location of these SJRs will change according to situation and suitability,“ he said in a statement today.

Today, Inspector-General of Police Tan Sri Acryl Sani Abdullah Sani stated that the PDRM launched SJR in strategic locations in every district throughout the country as of yesterday (Nov 22) until a set date, to ensure public safety.

The implementation of SJR is to prevent crime through police ‘omnipresence’ on a 24-hour basis to ensure public order.-Bernama