A student has launched an online photo series highlighting the achievements of Pakistani men studying at Cambridge University, following his frustration at the way his community is often portrayed.

Hassan Raja, 19, a history student at Fitzwilliam College,  photographed students standing among the famous arches of Cambridge, in an inspiring piece that he hopes will encourage school pupils from ethnic minorities to apply for elite institutions.

‘I found it worrying that the only time I’d see Pakistani men in the news would be when the subject of reporting was criminal activity,’ he told Femail. 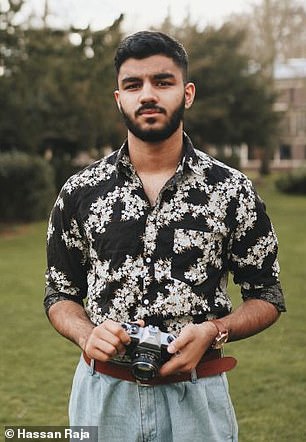 Hassan Raja, 19, a first-year student of History at Fitzwilliam College, Cambridge dreams of becoming an international photojournalist. He has launched an online photo series highlighting the achievements on Pakistani men studying at Cambridge University, following his frustration by the way his community is often portrayed

‘I feel this creates an inherently negative, one-dimensional profile of Pakistani men which is extremely harmful and something I aimed to change with the creation of this project’.

Hassan, an aspiring photo-journalist, pictured a medic, an engineering student, and man on course to be a diplomat among the group of Cambridge students, all of whom had Pakistani roots.

The photos, taken in front of Cambridge’s iconic buildings, show portraits of the young men, with captions explaining what they’re studying and their aspirations.

‘It’s about creating a fuller picture of our community, one in which our many contributions to society are recognised and where we’re seen as more than just criminals’ Hassan continued. 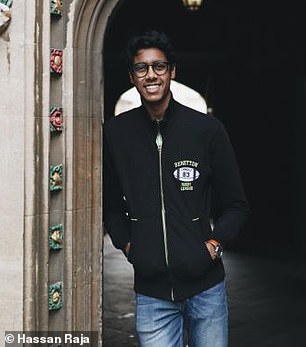 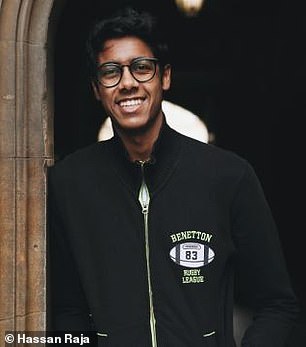 One of the men profiled by Hassan is Omar Kidwai,  a Natural Sciences student at Christ’s College. A maths whizz, Omar represented Pakistan at the International Mathematical Olympiad last year, he aims to go into politics to solve problems facing Pakistan 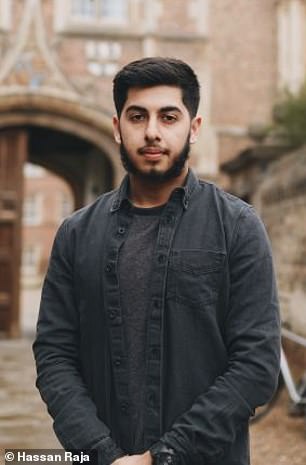 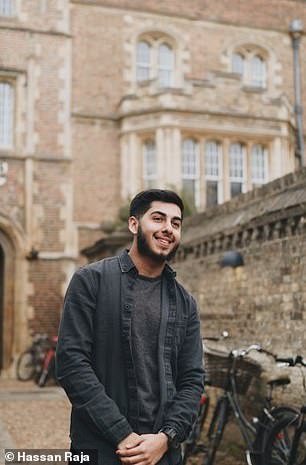 Another portrait taken by Hassan was of Sulaiman Iqbal. He studies History at Jesus College, Cambridge. On top of his studies he works as the Events Officer in the Cambridge University Islamic Society and as Undergraduate Rep for the Cambridge School of Humanities & Social Sciences. He dreams of pursuing a career in law and politics to lead to greater world peace.

Hassan, who was born and raised in east London to Pakistani parents, said that he want to use the ‘use the medium of photography to tell stories from marginalised communities’ and ’empower the voices of those suffering from oppression.’

‘It seems to me that whenever the term “Pakistani man” appears in a headline, you can guarantee that it will be followed by a mugshot and an article about criminal activity.

‘As a Pakistani man myself, I take issue with this wholly negative reporting as this narrow portrayal fails to recognise the contributions made by the Pakistani community to our society. 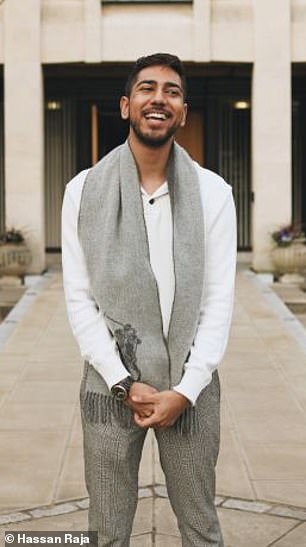 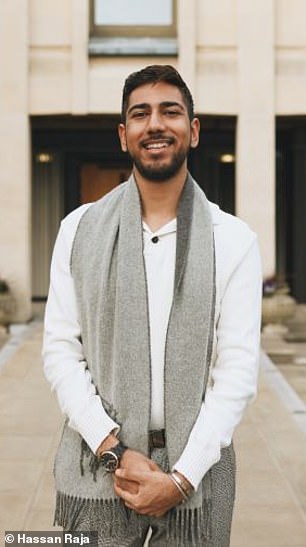 Ibrahim Mohamed, who is is in his final year at Wolfson College, Cambridge, studying for a degree in Psychological and Behavioural Science, was also profiled in the series. On top of his gruelling study schedule, Ibrahim has built up a career in social media under the moniker ‘IbzMo’. The very hard-working student has more than 8.5 million views on his YouTube channel. He hopes to become a commercial lawyer, and is currently in the process of building a school in his mother’s village in Pakistan. 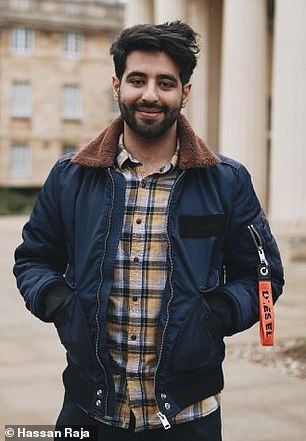 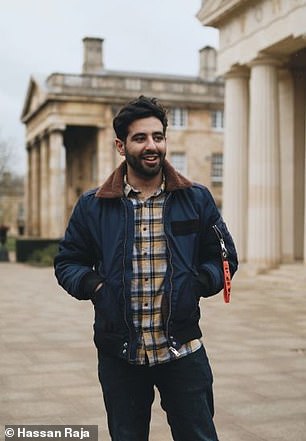 Another Pakistani man featured in the series is Zaki Arshad, a third-year Medicine student at Downing College. He hopes to become a surgeon and build a hospital in Pakistan.

‘So I decided to do something about it, to take back control of the narrative surrounding which people get to be the face of my community.

Setting his ambitions high, Hassan’s aim is to redefine what it meant to be a Pakistani man.

‘We’re talented academics, we’re capable of obtaining places at the world’s oldest and most prestigious institutions, and we have big dreams of leaving the world a better place than how we found it’ he said. 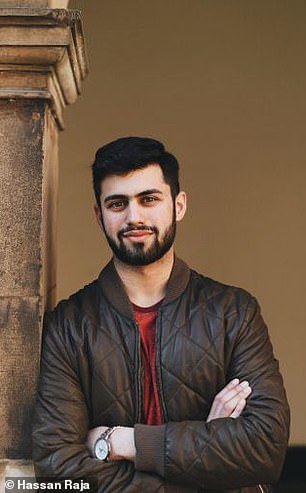 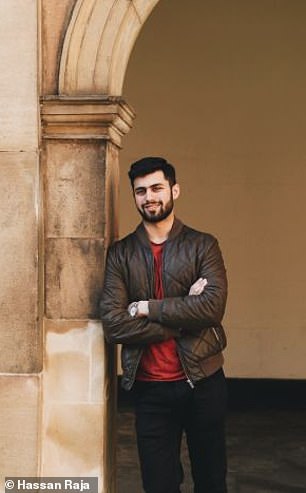 Fahd Omar is in his second year studying Economics at St John’s College. He is also the  treasurer of the Cambridge University Pakistan Society. He hopes to go into consulting to build up skills to give back in Pakistan and to his family in the UK. 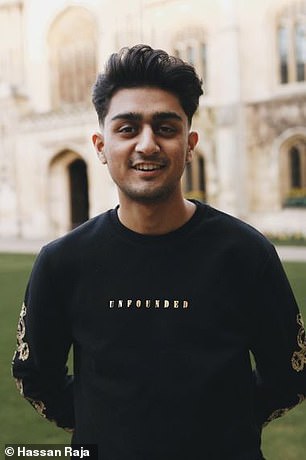 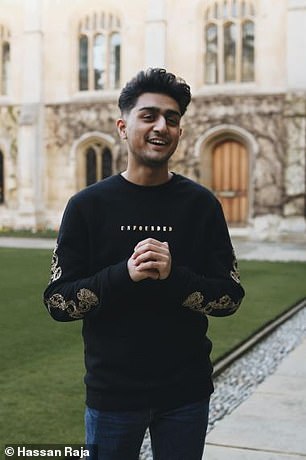 Abdullah Shakeel, a Medicine student in his first yea at Corpus Christi College, was also profiled in the piece. He hopes to improve access to maternal healthcare in rural Pakistan by setting up a charity after graduating.

He added he wants to ’empower Pakistani voices’ by telling stories from his community.

‘I feel as though pieces of this nature that strongly depict the presence of ethnic minorities at elite institutions can be powerful tools for access as, especially in my own experience’ he continued.

‘One of the biggest barriers to applying to Oxbridge was the fear of feeling alienated and not finding like-minded people, the idea that Oxbridge simply wasn’t a place for me. 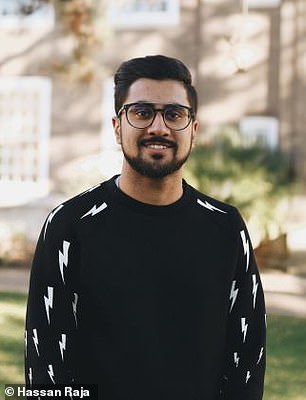 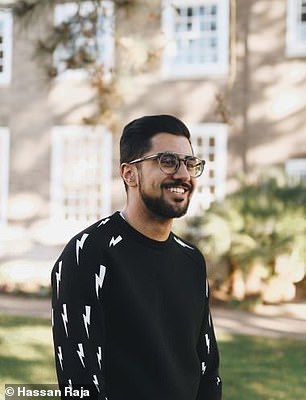 The President of Cambridge’s Pakistani Society, Hasaan Agha, was also photographed for the piece. Hassan studies Economics at Clare College and hopes to go into trading to  fulfil his ambitions of promoting efficient development in Pakistan when he graduates.

‘By photographing young Pakistani men against the backdrop of the Cambridge colleges in which they reside, all of which have deep connotations of elitism, I hope to normalise the idea that we are capable of obtaining places at these institutions.

‘Coming from a working class background, the idea of applying to the oldest and most prestigious colleges can be extremely intimidating, with their historical architecture and grand chapels seeming to exacerbate the perceived sense of elitism ‘

Hassan was keen to show a selection of students from different backgrounds to show that Pakistani men aren’t limited to just the sciences or arts, and spoke to men studying economics, history, veterinary medicine and law while creating the profiles. 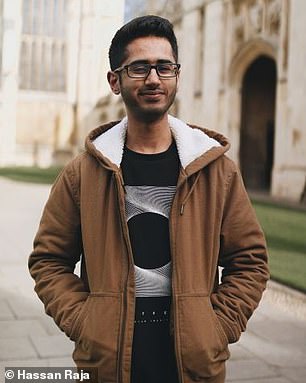 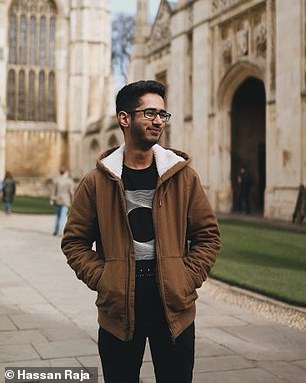 First year Nasar Siddiqui also spoke to Hassan for the piece. He is in his first year studying for a degree in Veterinary Medicine at Girton College. He hopes to eventually open a clinic for mistreated animals in Pakistan. 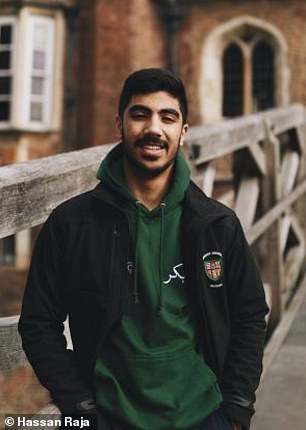 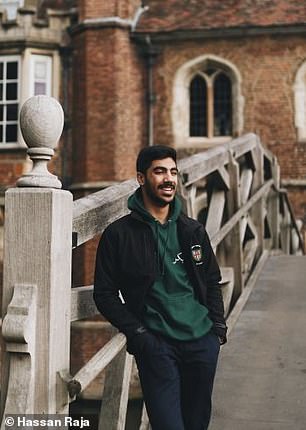 Aspiring philanthropist Abu-Bakr Samad is in his first-year studying Law at  Queens’ College. He hopes to go into law and then the diplomatic service when he graduates.

Most of the students pictured are British-born, which, Hassan explains, wasn’t a conscious choice, but more to-do with who was available.

The history student added that campaigns of a similar nature encouraged him to apply to Cambridge while he was at school.

In particular he notes the ‘Black Men of Cambridge’ shoot in 2017, where the University’s African-Caribbean Society posted an image of 14 of only 15 black male students accepted in 2015 gathered in one of the university’s iconic courtyards. 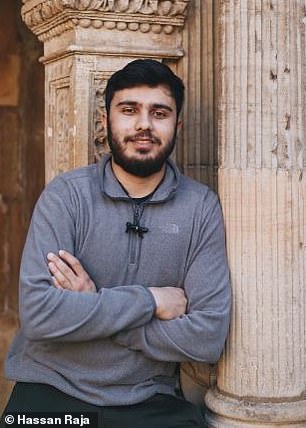 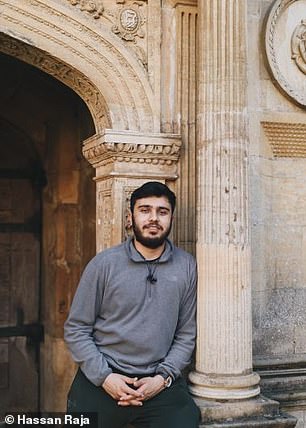 Second-year Gonville and Caius College Chemistry student Jawad Aziz was also profiled for the piece. He hopes to go into consultancy after he graduates.

The post is said to have been inspired by a similar image taken by students at Yale University in Connecticut, one of the best in the US, which went viral in April 2017.

‘I was definitely inspired by previous campaigns with similar aims such as the Black Men of Cambridge shoot in 2017’ Hassan said.

‘I remember being in Year 12 when this came out and finding it extremely inspiring, especially since I was beginning to decide which universities I’d be applying to. 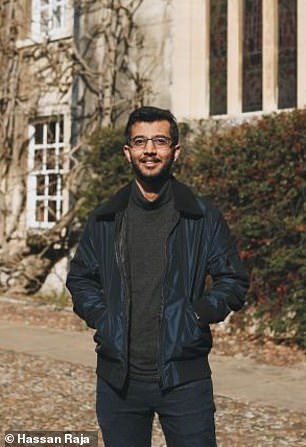 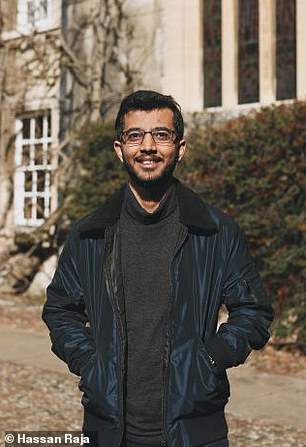 Arqum Anwar is a postgraduate student studying at Christ’s College. The PHD student studies  DNA damage and has been selected as a ‘Leader of Tomorrow’ by institutes at MIT and Harvard. He aims to explore Pakistan’s bioeconomy when he graduates. 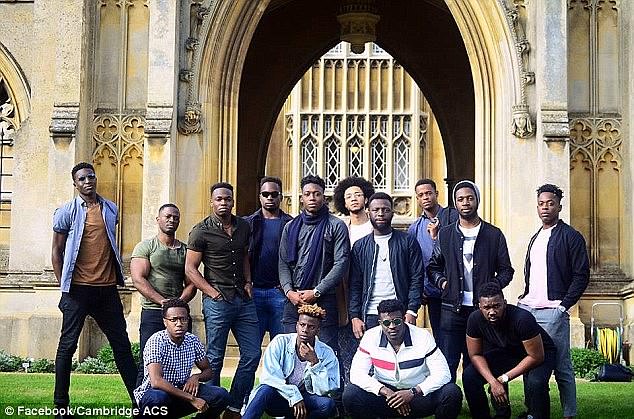 ‘The fact that it has stuck out in my mind to this day is a testament to the power of visual imagery, something I recognised and aimed to utilise with my own project.

‘I feel as though our communities suffer from the same problem with regards to our portrayal in the media which is another reason why I felt compelled to produce a project of this nature for my own community.

‘I was not the first student to use the visual medium of photography to highlight the presence and impact of ethnic minority students, and I hope I will not be the last.’