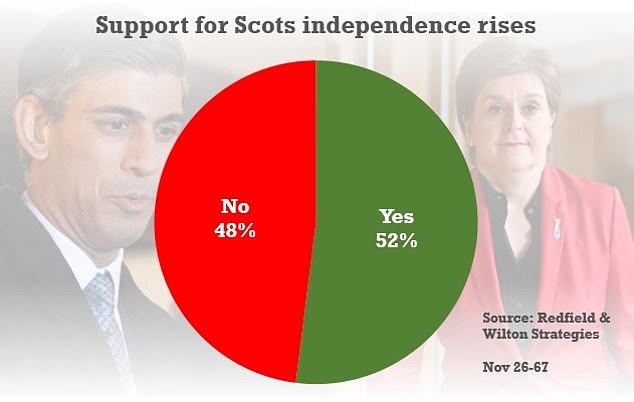 Backing for Scottish independence has risen after Nicola Sturgeon was blocked from holding a referendum.

A poll put support for the SNP‘s separatist drive at 52 per cent excluding ‘don’t knows’ – compared to 48 per cent who wanted to keep the union.

The figures were a reversal of equivalent Redfield & Wilton Strategies research from September last year, when 52 per cent were against independence.

However, the findings were not all good news for Ms Sturgeon, with signs that Labour is eating into her party’s support.

On Westminster voting intention the SNP is down 4 points from 2019 on 41 per cent, while Labour is up 12 points at 31 per cent. The Tories were down nine on 16 per cent.

Keir Starmer’s allies are hoping that if he looks likely to become PM at the next election it will blunt the SNP’s appeal as the best way of opposing the Conservatives. 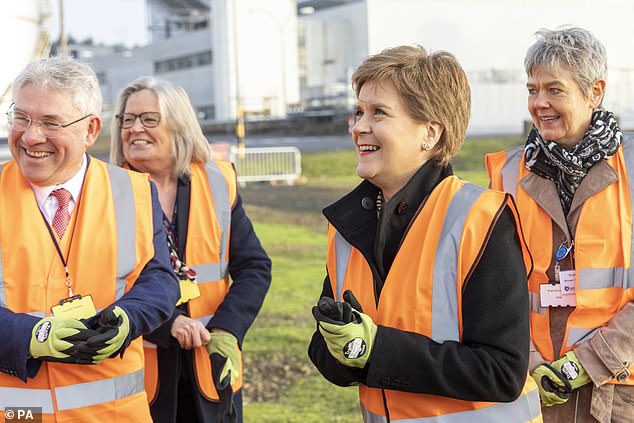 The latest polling was conducted this week after the UK Supreme Court ruled on November 23 that Ms Sturgeon cannot hold another independence referendum without permission from Westminster.

The First Minister wanted to hold another ballot as early as next Autumn, but has admitted she will not go ahead with a ‘wildcat’ vote.

Instead she is vowing to fight the next election on the sole issue of independence.

Some 49 per cent of Scots said they would vote ‘yes’ in a referendum, compared to 45 per cent who said ‘no’. The remainder were unsure.

A comparable poll on September 18 last year found 44 per cent would vote yes and 47 per cent no.

However, most supported the argument from ministers that a referendum should only be held if polls showed consistent support of more than 60 per cent.