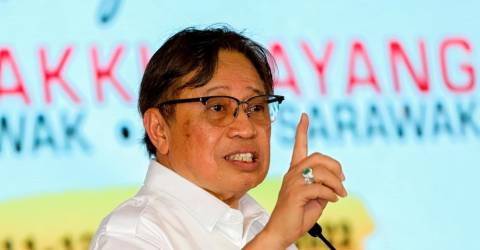 KUCHING: The people of Sarawak should seize the opportunity to venture into the country’s fast-growing franchise industry with a target sales value of RM22.66 billion by 2025, says Sarawak Premier Tan Sri Abang Johari Tun Openg (gambar).

He said there were 11 franchise companies from the state so far covering various categories such as food and beverage, health, wellness and services.

“This is what we see in the development of the small and medium enterprise (SME) industry, including franchising,“ he said when speaking in the third series of the Malaysian Goods Carnival 2022 (KBM2022) Borneo edition, which covers Sarawak, Sabah and Labuan at the Kuching Waterfront, tonight.

He said the state government also provided support and encouragement to SMEs through several initiatives by the Sarawak Ministry of International Trade & Industry, Industrial Terminal and Entrepreneur Development (Mintred).

Meanwhile, Abang Johari encouraged SME traders in Sarawak to take advantage of digital technology in trading to expand their market both domestically and abroad.

A total of 60 local exhibitors are involved in the carnival from Nov 11-13 with the Keluarga Malaysia Cheap Sales programme also being held simultaneously.-Bernama