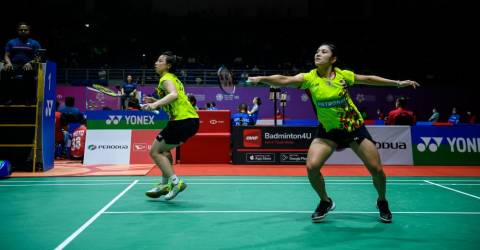 The world number 37 thoroughly dominated the game in both sets and just needed 38 minutes to send the Japanese pair with a 21-11, 21-15 victory.

Speaking after the match, Mei Xing said the win was truly unbelievable as they did not expect to overcome Matsumoto-Nagahara before they stepped into the court

“We were relieved to see that a series of unforced errors by the opponents kind of helped us and we managed to capitalise on the situation, kept up good momentum and and finally won the game.

“We lost to them last week because our mental state was not strong enough but now we can feel that we can handle the pressure much better,” she told reporters at the Axiata Arena, here, today.

Anna-Mei Xing will have a chance to produce an upset tomorrow as they will face world number 11, Jeong Na Eun-Kim Hye Jeong from Korea.

The South Korean pair progressed to the next round after they were made to slog before emerging victorious against Febby Valencia Dwijayanti Gani-Ribka Sugiarto from Indonesia, 23-25, 21-17, 21-18.

Commenting on tomorrow’s action, Mei Xing did not set any expectations but hoped they would give their best to storm into the semis. — Bernama