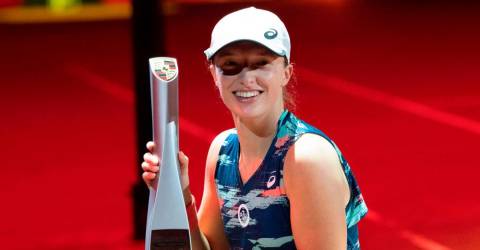 STUTTGART: World number one Iga Swiatek won her fourth consecutive WTA title this year as she swept aside Aryna Sabalenka in straight sets to win the Stuttgart final on Sunday.

The 20-year-old picked up her 23rd straight victory to add Stuttgart to her collection after her title wins in Doha, Indian Wells and Miami this year.

Swiatek was relentless, breaking Sabalenka’s serve twice in the opening set, then greeting every point won with a clenched fist of celebration to seal a 6-2, 6-2 win.

“It was a tough match, we fought for every game, hopefully there will be many more to come,“ said Swiatek.

She thanked her team for helping her recover in the short time between her semi-final win over Liudmila Samsonova, which lasted just over three hours. “Thank you for giving me life again.”

Swiatek threw her racquet in the air with joy and held up four fingers for each of her titles in 2022 after breaking Sabalenka’s serve in the final game to convert her third championship point.

She is the first Polish player to win a Grand Slam after her French Open triumph in 2020 and her victory in Stuttgart was the seventh title of her career. – AFP