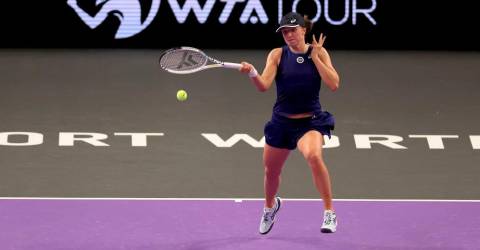 FORT WORTH: World number one Iga Swiatek beat Caroline Garcia 6-3, 6-2 to clinch a semi-final spot at the WTA Finals on Thursday, but Garcia remained in the hunt for a place in the knockout stage.

France’s Garcia can still advance with a victory on Saturday against Daria Kasatkina, who eliminated Coco Gauff from semi-final contention with a 7-6 (8/6), 6-3 victory over the error-strewn fourth-ranked American.

Poland’s Swiatek saved five of the six break points she faced and broke Garcia four times on the way to a victory that avenged her three-set loss to the French player in the quarter-finals at Warsaw in July.

Swiatek, the reigning US and French Open champion who put together a 37-match win streak earlier this year, is aiming to finish out 2022 on a high note.

Garcia had a game plan against her, but said it’s not always easy to implement against the Pole.

“The thing is, you have to take some time away from her,“ Garcia said. “Try to be aggressive, to push her out of her comfort zone. But most of the time, she does it better than you. She’s really strong, really solid, doesn’t give you a lot of unforced errors.

“As soon as she gets a little bit more space or more of an angle, she makes you feel you’re slower, playing bad.”

Swiatek, who hasn’t dropped a set in two round-robin matches, said she’s feeling no pressure as she caps a year that has so far featured eight titles.

“It’s the last tournament of the season, so I have kind of nothing to lose,“ the 21-year-old said. “I don’t have to worry what I’m going to do next.

While Swiatek is assured of advancing from the Tracy Austin Group, Garcia and Kasatkina will be fighting to go progress Saturday.

“This is exactly what we face every single week,“ Kasatkina said. “If you win, you advance, if you lose, you go home… So it’s going to be fun.”

In a battle of two players making their debuts in the season-ending event, Kasatkina improved to 3-0 over Gauff with an efficient display that featured 14 winners and 14 unforced errors.

Gauff fired 26 winners, but was undone by 43 unforced errors.

A see-saw first set saw Kasatkina rally from 4-1 down to grab a set point at 6-5.

Gauff fended that one off as they went to a tiebreaker, which the American led 3-0.

Kasatkina rallied again, loading up her forehands to give herself two more set points.

Gauff again held on, but sent a forehand into the net on Kasatkina’s third opportunity.

Kasatkina then broke Gauff in her first three service games of the second as she improved to 29-0 this year when winning the first set.

“It was tough,“ Kasatkina said. “I was nervous at the beginning. With the rhythm of the match, nerves disappear a little bit and start to be better.