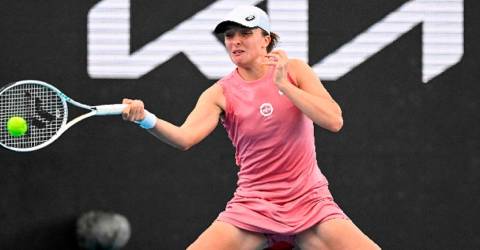 ADELAIDE: Defending champion Iga Swiatek made short work of US Open runner-up Leylah Fernandez in a dominant 6-1, 6-2 win at the Adelaide International on Thursday to set up a quarterfinal against two-times Grand Slam winner Victoria Azarenka.

Swiatek, the 2020 Roland Garros winner, took control of the match from 1-1 in the first set and capitalised on Fernandez’s misfiring serve to wrap up the victory in 75 minutes at the Australian Open warm-up event.

The Pole hit 17 winners against her 19-year-old opponent and did not face a break point as she extended her winning streak in Adelaide to seven matches.

“I was playing against a younger girl, which is pretty new for me,” Swiatek, 20, said. “She’s pretty talented and she’s a Grand Slam finalist, so I knew it was going to be tricky.

“I felt really confident and I’m pretty happy that I could finish it really quickly and I didn’t let go of focus.”

Swiatek, who defeated Belinda Bencic to win last year’s title, will face Azarenka in the next round after the former world No. 1 secured a 6-3, 7-5 victory over Australian wildcard Priscilla Hon at Memorial Drive.

Hon had stunned Petra Kvitova in the first round on Monday and threatened a tiebreak in the second set against Azarenka but the Belarusian wrapped up the win in just under 90 minutes.

Swiatek said she was looking forward to her match against Azarenka, who won both her Grand Slam titles at Melbourne Park.

“I love playing such an experienced player because it’s always a challenge,” Swiatek said of the 32-year-old.

“I have a different mindset when I play against players like that because I watched them when I was younger. It shows me my progress, but also I have huge amount of respect for them.”

In the men’s ATP 250 event, top seed Gael Monfils of France stormed to a 6-2, 6-1, win over Argentine Juan Manuel Cerundolo, wrapping up the match in only 53 minutes. He will face Tommy Paul in the quarterfinal.