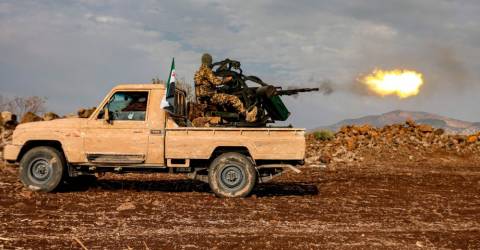 BEIRUT: Syria’s 11-year war has provided a “drone laboratory” to countries, jihadists and other armed groups — with some weapons trialled and later deployed in Ukraine — peace monitors said Tuesday.

Six countries have deployed 39 models of military drones over the bloody war’s course, according to a new report published Tuesday by Dutch-based peace-building organisation PAX.

“Countries and non-state armed groups have tested various new types of drones and explored how their uses can improve military tactics and strategies,“ PAX said.

Iran, Israel, Russia, Turkey, the United States and Syria’s military have all made use of drone technology in Syria, the report said, perfecting technologies for use in other conflicts.

“Over the last decade, upgraded drones in the Syrian skies have repeatedly shown how military actors have been through a learning process and enhanced their knowledge of the design, production and use of drones,“ PAX added.

Kamikaze drones developed by Iran, Russia and the US were used in Syria before roll-out “on a larger scale” in Ukraine’s ongoing conflict, the report highlighted.

In northern Syria, Turkey began deploying military drones in 2016, helping Ankara and its proxies seize territory along the border.

The Bayraktar TB-2 became “Turkey’s best-known combat drone, playing a key role in the conflicts in Libya, Nagorno-Karabakh, Ethiopia and most recently in Ukraine,“ PAX said.

PAX noted that Syria proved to be “the ultimate unmanned aerial vehicles laboratory” for Russia, allowing Moscow to evaluate its partners’ drones and trial its own combat drones and weapons.

Russia’s 2015 military intervention in support of the Syrian regime was crucial in turning the tide of the war in Damascus’s favour after it had lost large swathes of territory.

“Russia… significantly influenced the war’s course through the incorporation of drones,“ PAX said.

Iran has also provided allies with drones, including Iraqi militias and Hezbollah, the powerful Lebanese group.

Six types of Iranian drones have been “reported in the hands of the Syrian regime,“ according to PAX.

The fighting in Syria has also seen civilian drones converted for military use by jihadists such as Hayat Tahrir al-Sham, which controls much of northwest Syria, and the defeated Islamic State group. – AFP