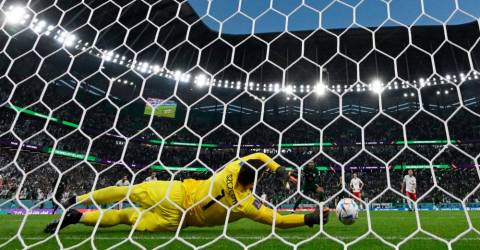 DOHA: Goalkeeper Wojciech Szczesny was Poland’s hero as he pulled off a breathtaking double save to keep his country in contention against Saudi Arabia in the World Cup on Saturday.

Robert Lewandowsi finally scored the first World Cup goal of his distinguished career but it was the 32-year-old goalkeeper who preserved Poland’s hard-fought lead in a tense Group C game and paved the way for a crucial 2-0 win.

Szczesny’s sensational reflex stop from Mohammed Al-Burayk after the Juventus ‘keeper had parried Salem Al-Dawsari’s spot kick was potentially the save of the tournament so far.

It was a crucial moment as Poland had just taken the lead through Piotr Zielinski in the 39th minute when Krystian Bielik tapped the back of Saleh Al-Shehri’s calf and the Saudi forward plunged to the turf, looking for a penalty.

To the disbelief of the Polish players, Brazilian referee Wilton Sampaio consulted the VAR monitor and pointed to the penalty spot.

As the overwhelming Saudi crowd in Education Stadium roared, Szczesny dived to his right to push away Dawsari’s penalty and then denied Burayk who pounced on the rebound, pushing away his powerful shot away to his teammates’ delight.

“It’s good for goalkeepers, because we can’t become heroes by scoring goals. At least sometimes we can help the team by making big saves.”

He said the penalty was “pretty OK” but “the second shoot was much more difficult” — and revealed he had known which way to dive.

Poland coach Czeslaw Michniewicz said simply it was a “great save” but the more fulsome praise came from his counterpart Herve Renard, the Saudis’ charismatic French coach, who said: “I think he won this game today.”

“He did his job, a fantastic job, but nobody discovered him today, he is a great goalkeeper.”-AFP