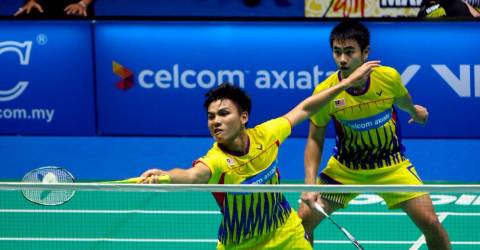 World number 26 Sze Fei-Nur Izzuddin tore the formbook to shreds by upstaging the world number seven Indonesians 21-18, 21-17 in 34 minutes in the quarter-finals at the Odense Sports Park.

This is also their first win in four meetings against the Indonesians, who played their part to help Indonesia lift the Thomas Cup after a 19-year wait in Aarhus, Denmark last week.

In tomorrow’s semi-final, Sze Fei-Nur Izzuddin will take on the winner of the tie between Indonesia’s Muhammad Shohibul Fikri-Bagas Maulana and Danes Kim Astrup-Anders Skaarup Rasmussen.