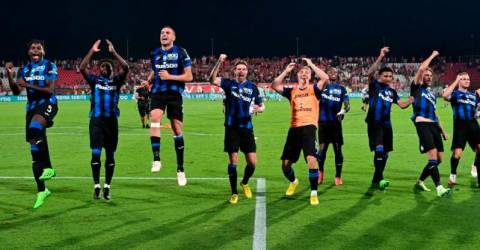 ATALANTA are top of the Serie A table after five games or more for the first time and will look to continue their impressive start when they host second-bottom Cremonese on Sunday.

A win in the Lombardy derby would give them a fifth win in their opening six games, another first for the Bergamo-based club.

Manager Gian Piero Gasperini, however, is aware that success this early in a long campaign counts for little but is hopeful that his side, who finished eighth last season, can live the dream a little longer.

“I’m happy about this record, but it is something temporary,“ said Gasperini, who took over at Atalanta in 2016.

“We’ll try to continue (being leaders) for as long as possible. If we managed to arrive to the (international) break like this, it would be one more prize.”

Injury woes have reached a new level at seventh-placed Juventus ahead of their home match against Salernitana on Sunday, with new signing Paul Pogba likely to remain unavailable until January following knee surgery.

The Frenchman was initially expected to return in September but joins winger Angel Di Maria and first-choice goalkeeper Wojciech Szczesny on the list of players who are taking longer to recover than expected.

A depleted squad will only add to the pressure on head coach Massimiliano Allegri, who is looking to pick up the pace after just two wins from five games that have left the Turin-based club four points off the top.

Napoli are second after Sunday’s superb 2-1 win at Lazio but manager Luciano Spalletti’s thirst for more is yet to be quenched ahead of their home game against Spezia.

“We are on the right track, the team in (good) condition but it gets lost in trivial things, otherwise they would do even better,“ Spalletti.

Third-placed AC Milan beat rivals Inter 3-2 in their last Serie A match but the defending champions will need to work on becoming more consistent before Saturday’s clash at Sampdoria.

Inter, who are eighth, are without the services of key striker Romelu Lukaku due to injury ahead of their trip to Torino on Saturday.

Fifth-placed AS Roma travel to Empoli on Monday after suffering a humiliating 4-0 defeat at Udinese, which left manager Jose Mourinho struggling to maintain a positive attitude.