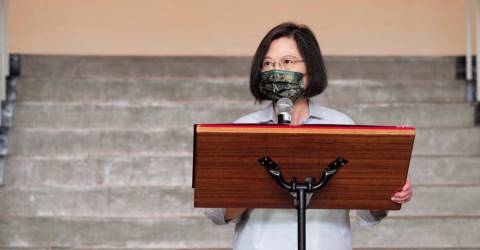 TAIPEI: Taiwan saw a record number of Chinese military air incursions in August, with more than 440 warplanes entering its air defence zone as Beijing raged against visits to the democratic island by United States lawmakers.

Taiwan’s 23 million people live under the constant threat of invasion by China, which sees the self-ruled democracy as part of its territory to be reclaimed one day, by force if necessary.

China’s Communist Party lashes out at any diplomatic action that might lend Taiwan legitimacy and has responded with growing anger to visits by Western officials and politicians.

For a week after Pelosi’s visit in early August, China sent warships, missiles and fighter jets into the waters and skies around Taiwan, its largest and most aggressive exercises since the mid-1990s.

Last month, 446 Chinese aircraft — mostly fighter jets — crossed into Taiwan’s ADIZ, according to a database compiled by AFP based on figures released by Taipei’s defence ministry.

That monthly total alone was more than the 380 sorties Chinese planes carried out for the whole of 2020.

So far this year Chinese planes have made at least 1,068 individual incursions into the ADIZ, surpassing 2021’s total of 969.

Prior to August, the previous busiest month for incursions since Taiwan started regularly publicising such data two years ago was October of 2021, with 196.

Taiwan’s ADIZ is much larger than its airspace. It overlaps with part of China’s ADIZ and even includes some of the mainland.

Beijing’s sabre-rattling has grown more pronounced under President Xi Jinping, China’s most authoritarian and internationally assertive leader in a generation.

Last week Taiwan announced plans for a record hike in next year’s defence budget to Tw$586.3 billion ($19.2 billion) in the wake of growing Chinese military threats.

But American and Taiwanese strategists have increasingly pushed Taipei to adopt a “porcupine” strategy of asymmetric warfare and comparatively cheaper mobile weapon systems that would make any invasion hugely costly. – AFP