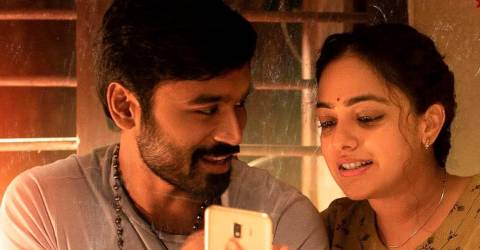 DHANUSH plays Thiruchitrambalam (also known as Pazham) who is a food delivery man. His humble life is centred around his grandpa (Bharathiraja) and childhood buddy Shobana (Nithya Menen). Pazham has a rough bond with his dad (Prakash Raj), a police officer. Pazham embarks on a self-realisation journey as he explores through life in search of passion and love. The story centres around Pazham’s ability to solve his life’s obstacles.

Dhanush is a natural in the role of Thiruchitrambalam. I have to agree that seeing Dhanush return to the cinema as a nice simple man is already a reason why it’s a must watch film. While Dhanush has played roles like this before, I admire how he constantly finds a way to make each of his characters appealing. It is a highly internal performance in which he transmits his character’s sentiments with minimum actions, which is more than adequate to capture the hearts of the viewers.

Shobana and Pazham’s relationship is the type that is rarely addressed in Tamil movies. Their bond does not appear contrived, and it is genuine enough to make others grin. Nithya Menen doesn’t have to work hard to make Shobana a charming character. Her laugh and smiles are indeed just perfect to make her a reliable comfort friend.

Prakashraj and Bharathiraja perform in accordance with the screenplay, which was precisely designed to dp them justice in their parts. This film also marks Anirudh and Dhanush’s musical return. In several scenes, Anirudh’s music and background soundtrack heighten the tone of the film. His excellent work as a music director never seems to end.

Thiruchimtrambalam is a great package that contains love, comedy, and emotions. The storyline is gradual and delicate, and it works so beautifully for the movie. This is the most enjoyable melodrama in a long time. The only thing that appears to be lacking here is some action, although this is hardly really a problem to begin with.

This film is able to tell its storyline without resorting to any gimmicks to satisfy fans. The film mainly focusses on communication, which is performed well in order to keep us intrigued. I do realise, towards the conclusion, that the narrative becomes quite predictable, but you will not really mind since at this time, all you want is for the main characters to be happily together.

Thiruchitrambalam is a really pleasant entertaining film, and it’s worth watching.