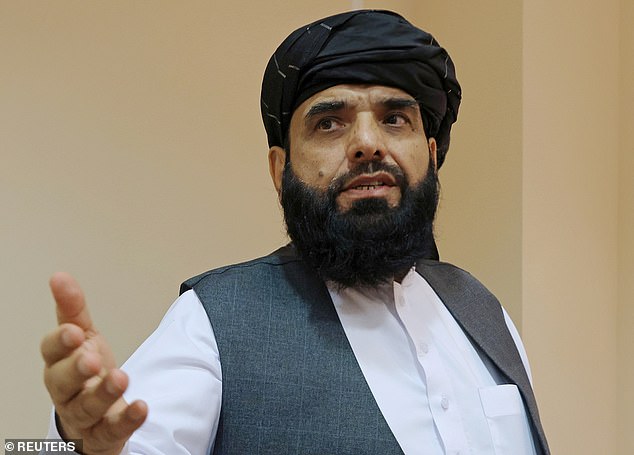 
The Taliban has shown its support for anti-climate change efforts, calling for international aid to help complete environmental projects in Afghanistan.

The Taliban regime, which came into force in August, will not be represented at Cop26 as it is yet to be recognised internationally.

But Mr Shaheen said that environmental projects which had been approved for United Nations funding under the former Afghan government must ‘fully resume work’.

And he stressed that the Taliban – which formerly targeted international contractors – was ‘committed’ to ensuring their safety.

Mr Shaheen said: ‘Afghanistan has a fragile climate. There is need for tremendous work.

‘Some climate change projects which have already been approved and were funded by Green Climate Fund, UNDP, Afghan Aid, should fully resume work.’

Relief agencies have warned that a drought in Afghanistan, which UN scientists say has been worsened by climate change, could force 22 million into ‘acute food insecurity’.

But the work of international agencies has been disrupted by the change in regime, and international donors are reluctant to work with the Islamist former insurgents.

Mr Shaheen stressed, however, that the Taliban – who had previously targeted international contractors – would be be able to ensure the security of teams working in the projects.

Writing on Twitter, he said: ‘The Islamic Emirate of Afghanistan is committed to providing security and a safe environment for the work of NGOs and charity organisations.’

Mr Shaheen made his call as the Taliban’s shadowy ‘supreme’ leader Haibatullah Akhundzada made his first public appearance since 2016.