She’s no doubt the woman of the decade after numerous sold out tours (including stadiums), chart topping albums, and the heart for other artists to back it all up.

Taylor Swift (who turns 30 tomorrow) stunned as she posed on the red carpet at the Billboard Women in Music event where she was honored for Woman of the Decade.

The Grammy winning artist was just 16 years old when she first got her claim to fame with her self-titled debut album. And now she holds a slew of awards such as 23 Billboard Music Awards, 12 Country Music Association Awards, and 10 Grammys to name a few.

Woman of the golden decade: Taylor Swift (who turns 30 tomorrow) stunned as she posed on the red carpet at the Billboard Women in Music event on Thursday evening where she was honored for Woman of the Decade 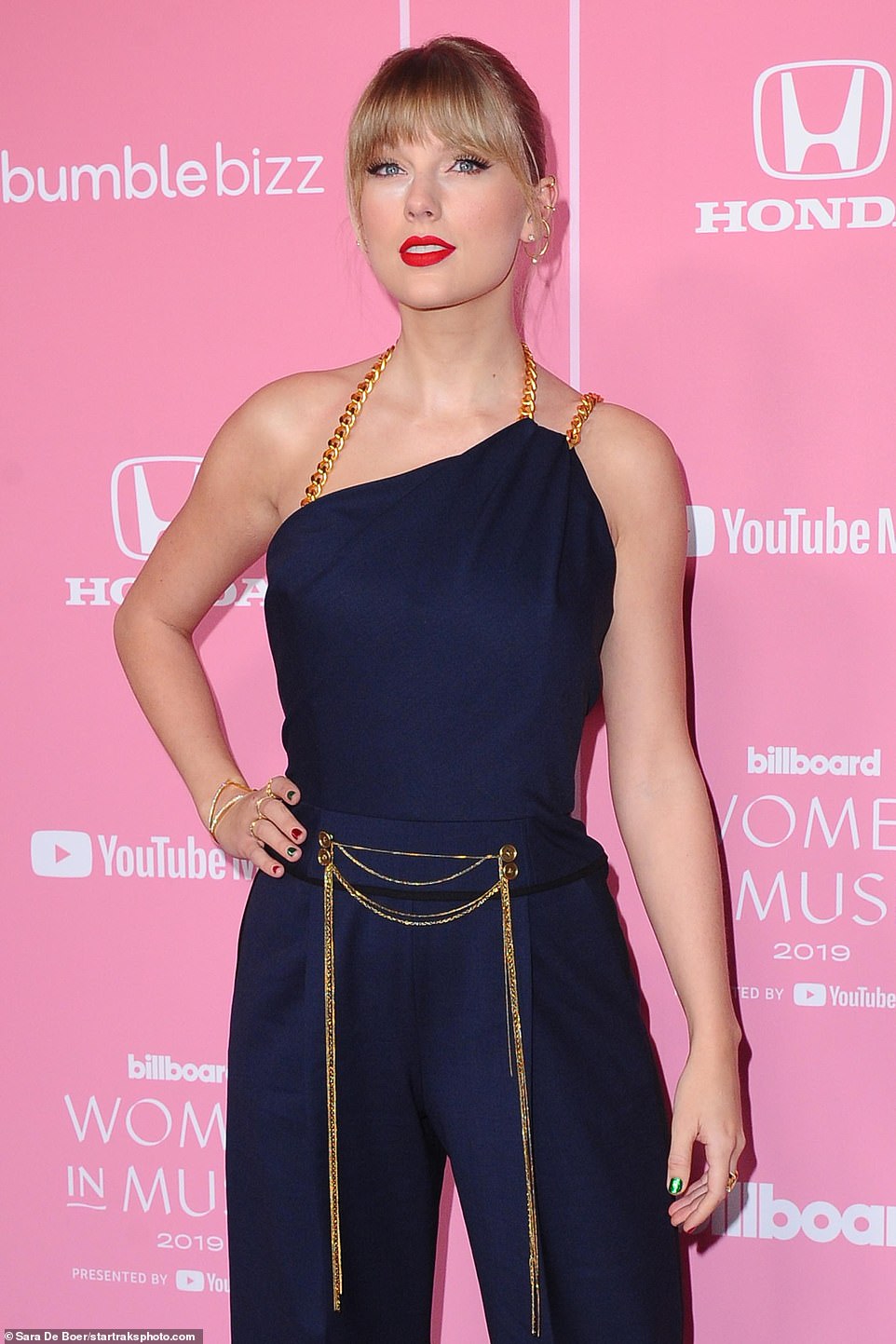 Power moves: The songwriter showed off her stunning attire for the evening in a navy jumpsuit with gold chain detailing

For her look of the evening, the Lover singer looked to come straight out of a love story in a navy jumpsuit with gold chains for her shoulder straps.

Not a hair was out of place as she rocked a braided pony tail and that red lip classic that has been just as iconic as her music.

She made sure to also bring a little holiday spirit to her look with green and red painted finger nails and toenails to brighten up the sophisticated attire. 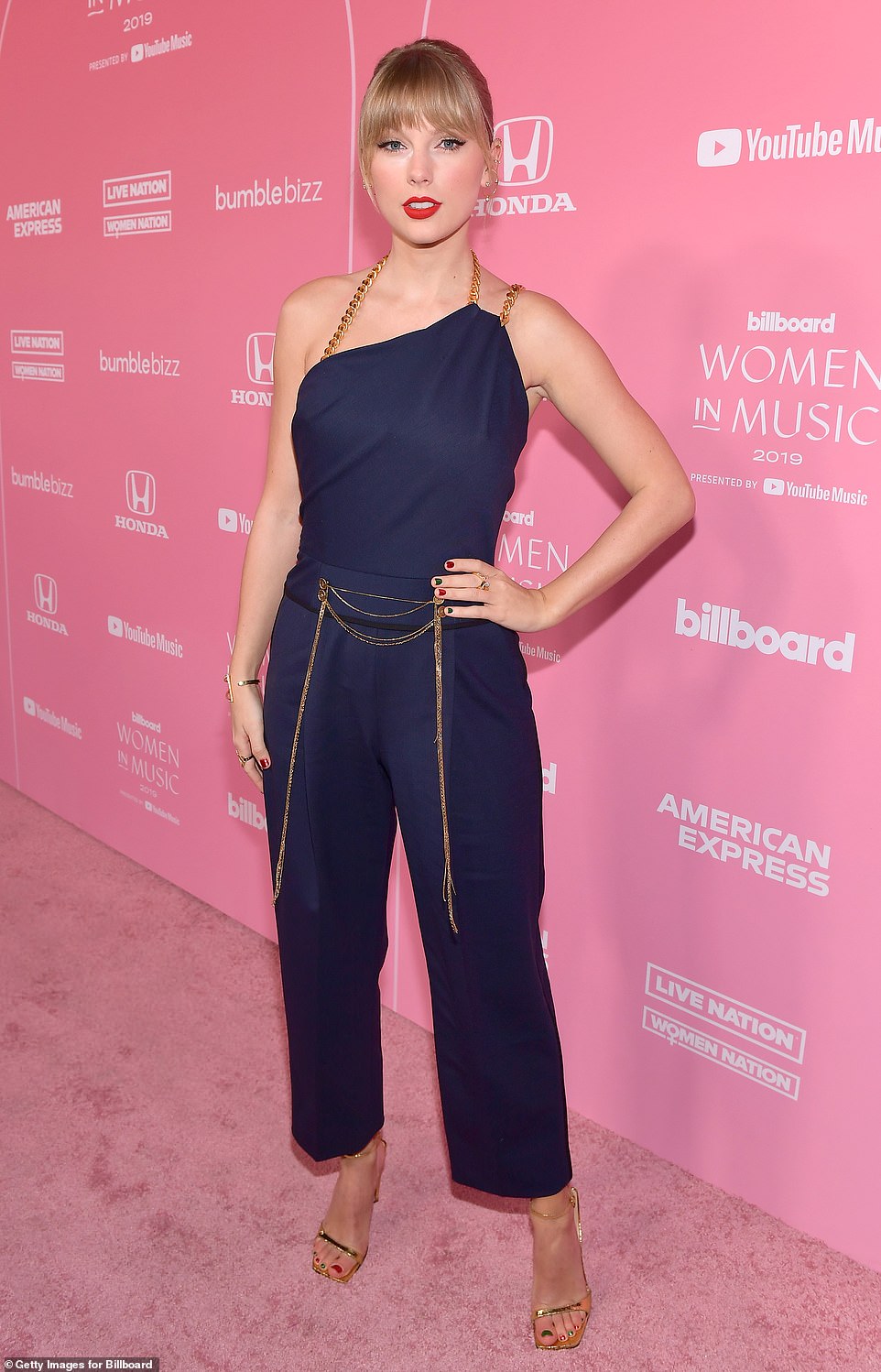 Fearless leader: For her speech, Taylor opened up about her journey through this decade while touching on streaming rights and the Scooter Braun scandal 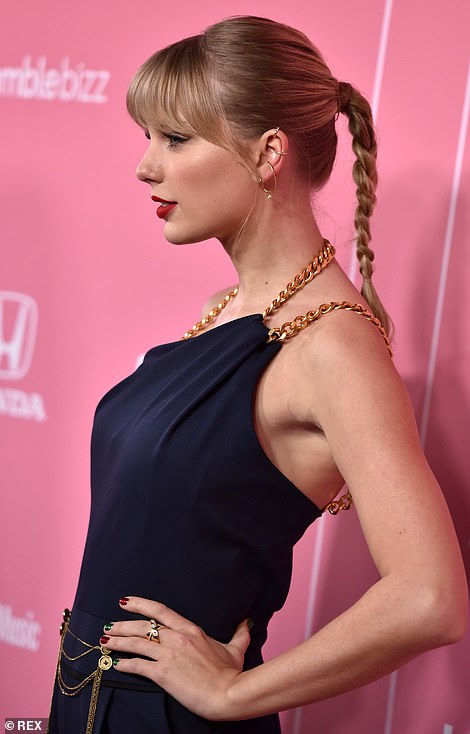 Stylish: No hair was out of place for this subtle braided look

Jameela Jamil had the honor of presenting the iconic award to Taylor who had some heartfelt words to share to the audience of Taylor’s wild accomplishments.

As she accepted her award, The Man singer had some wise words to share with the audience.

‘So what does it mean to be the woman of this decade? Well, it means I have seen a lot. When this decade began I was 20 years old. And I had put out my self-titled debut album with I was 16. And then, the album that would become my breakthrough album was called, Fearless. And I saw that there was a world of music and experience beyond country music that I was really curious about,’ she began in her acceptance speech.

She then went on to touch about the ‘wave of harsh criticism’ that she had received quoting an old headline that called it a ‘Swift Backlash.’

She later said: ‘And now I realize, that this is just what happens to a woman in music if she achieves success or power beyond people’s comfort level.’ 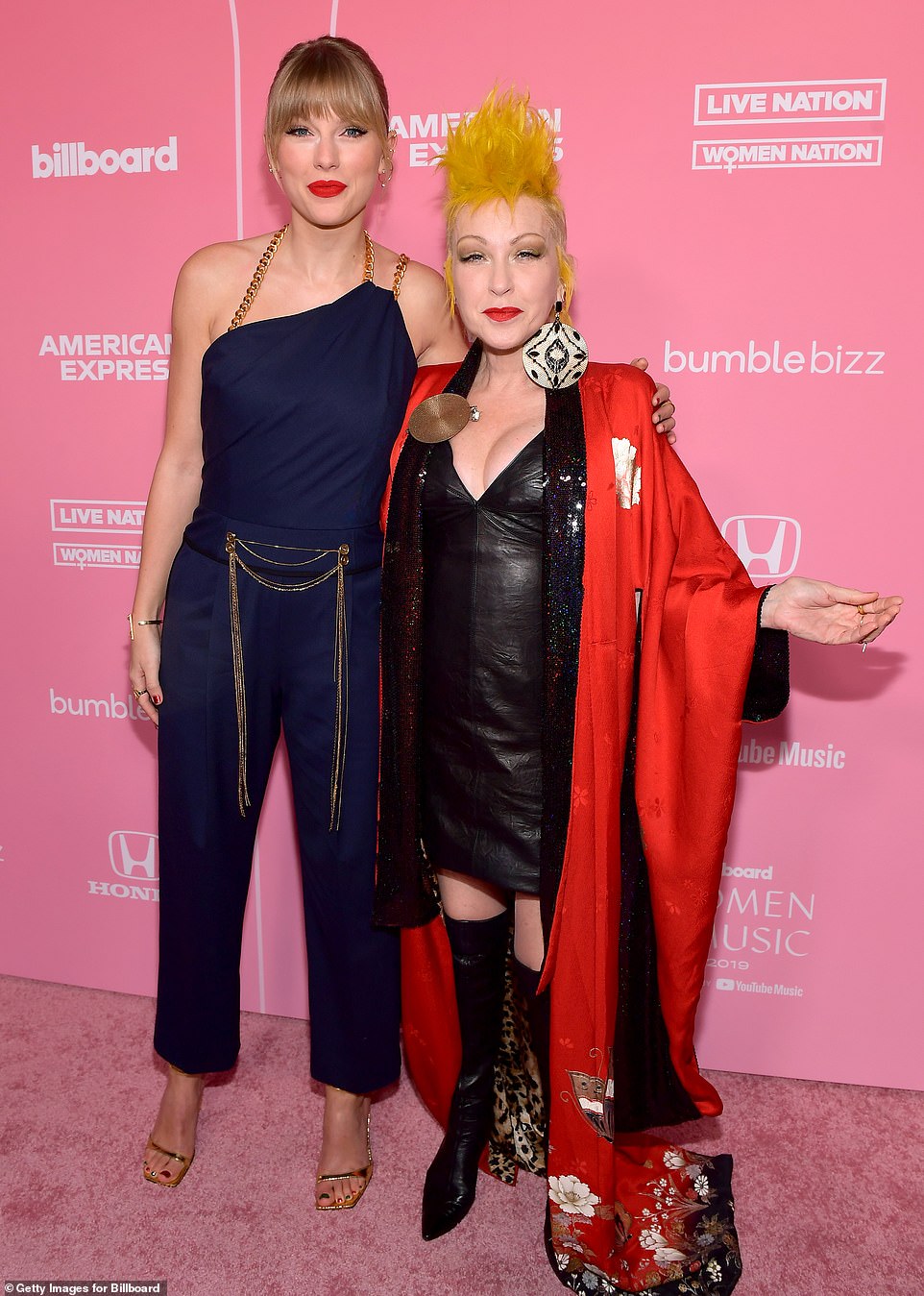 Alpha types: Taylor and Cyndi Lauper pose together at the event. Cyndi rocked a mohawk and some yellow hair for the occasion 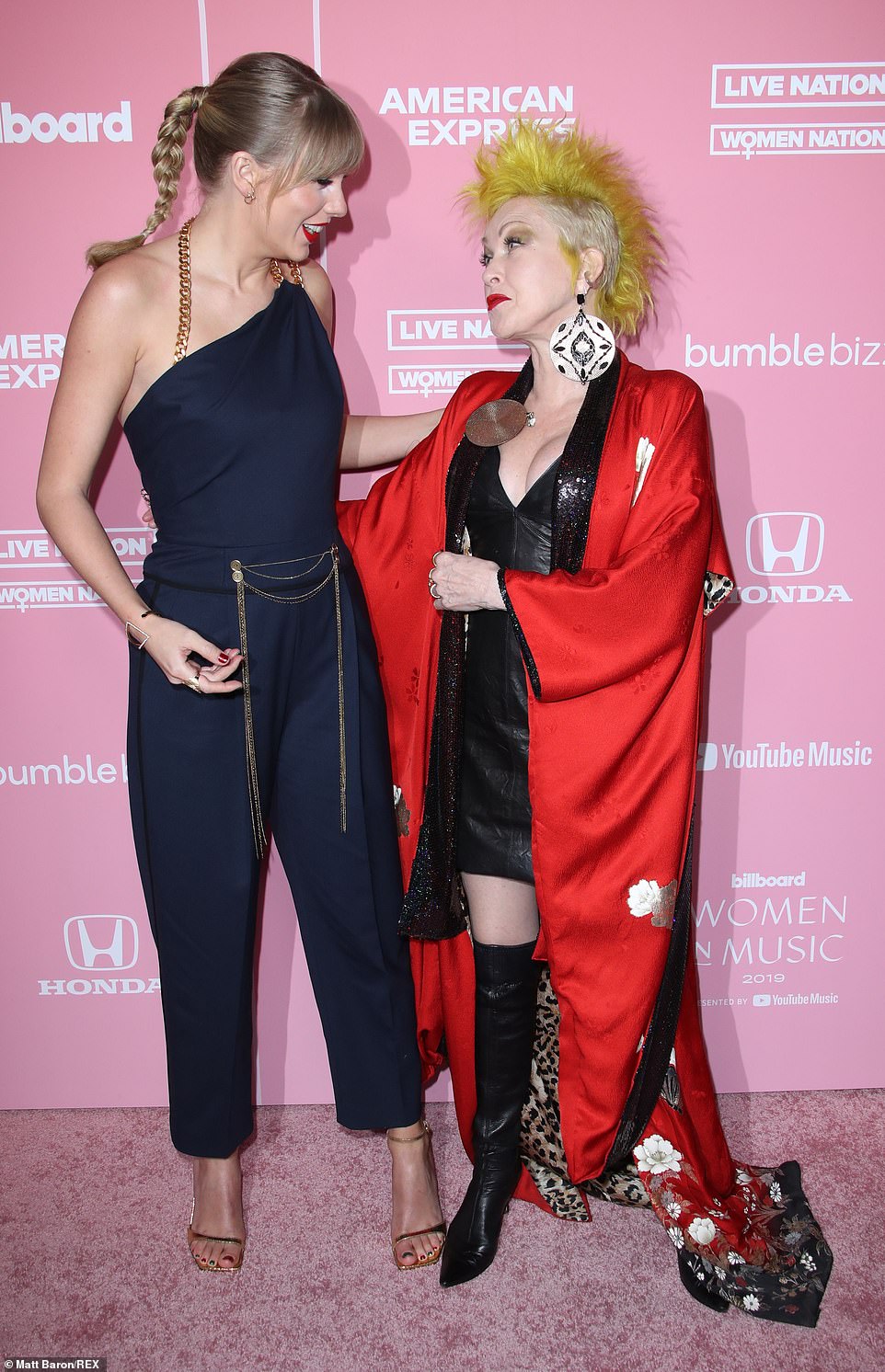 Iconic women: The two shared a laugh while getting ready to pose for the remainder of their photos

She continued on with her powerful speech speaking about how women’s achievements in the industry are breaking boundaries before calling them ‘diamonds’ after everything they have amounted to.

The Woman of the Decade then touched upon one of her favorite subjects to shed light on: ‘the streaming world.’

‘I still don’t think that record contracts or producer’s agreements have full caught up,’ she said before saying she hopes to find a solution for the creators. 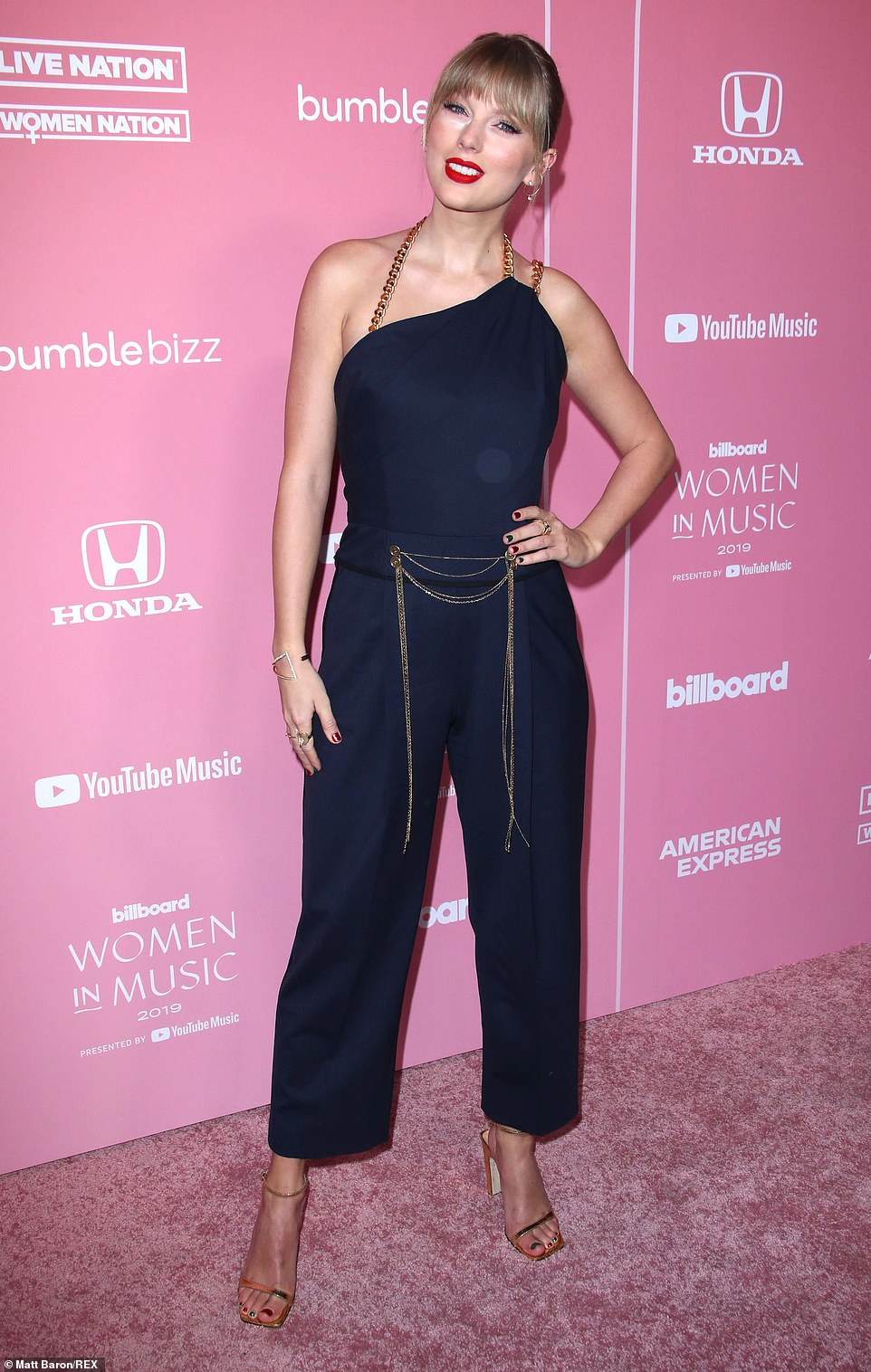 Like daylight: Taylor beamed with happiness while walking the pink carpet inside the event where she spoke about ‘unregulated world of private equity’ and the harm it has caused her

But one topic Taylor holds dear to heart that she also touched upon, the ‘unregulated world of private equity.’

She went on to call herself the ‘resident loud person’ and spoke about the issue that has been so close to her heart.

‘To this day, none of these have investors have ever bothered to contact me or my team directly.’

She didn’t stop there she went on to name drop Scooter Braun and his involvement in purchasing her catalogs without giving her the opportunity to purchase them herself. 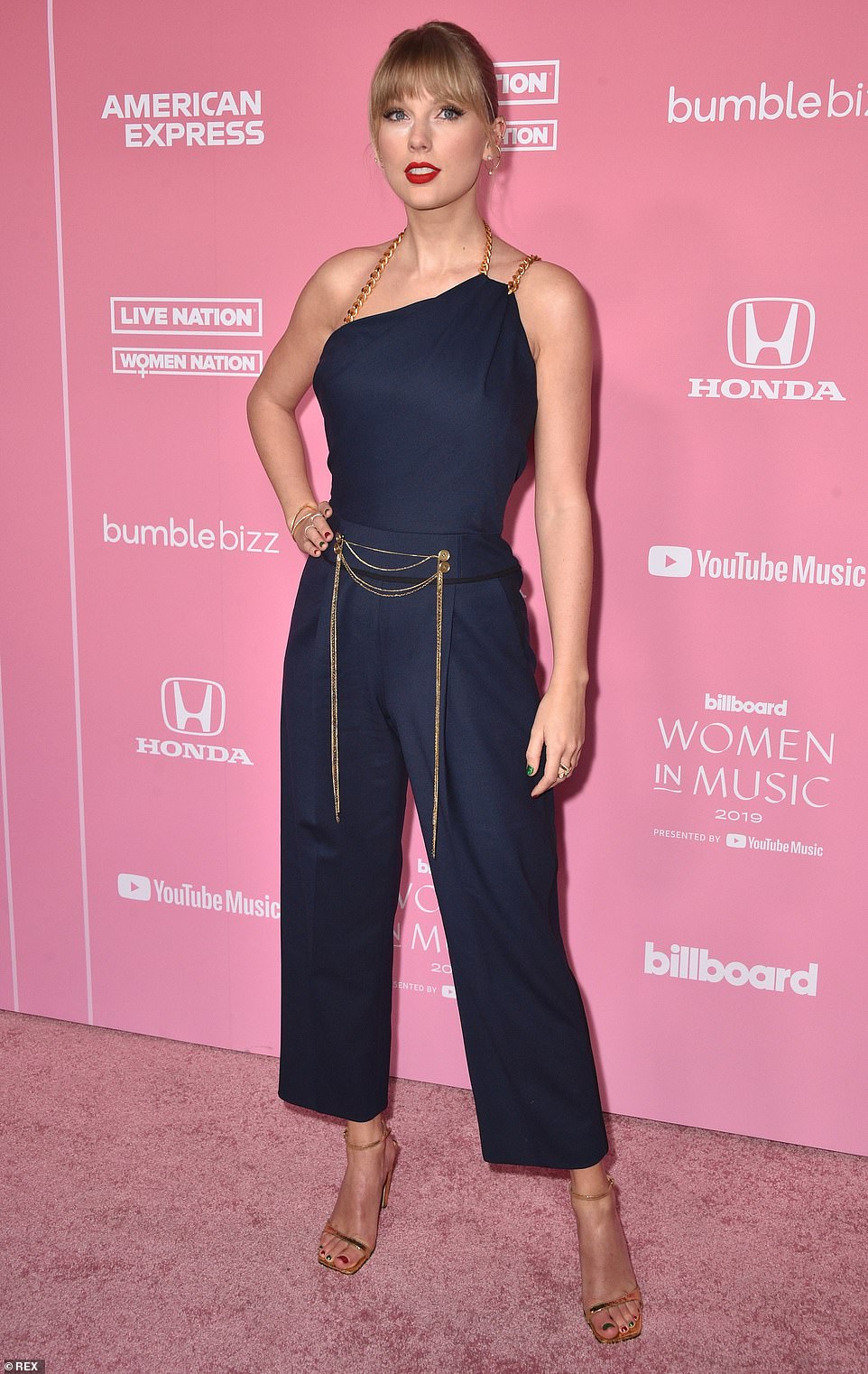 Fearless: The star also talked about the ‘wave of harsh criticism’ that she has received over the years before saying she turns her head to criticism now and does whatever she wants

After her golden speech, Swift received a standing ovation for her words to women everywhere.

The songwriter is in good company tonight as other big names in music will be honored this evening such as Billie Eilish who is woman of the year, Alanis Morissette, Nicki Minaj, Alicia Keys, Brandi Carlile, and Rosalia.

Alicia is also being honored with the Impact award and Brandi is set to receive the Trailblazer award. 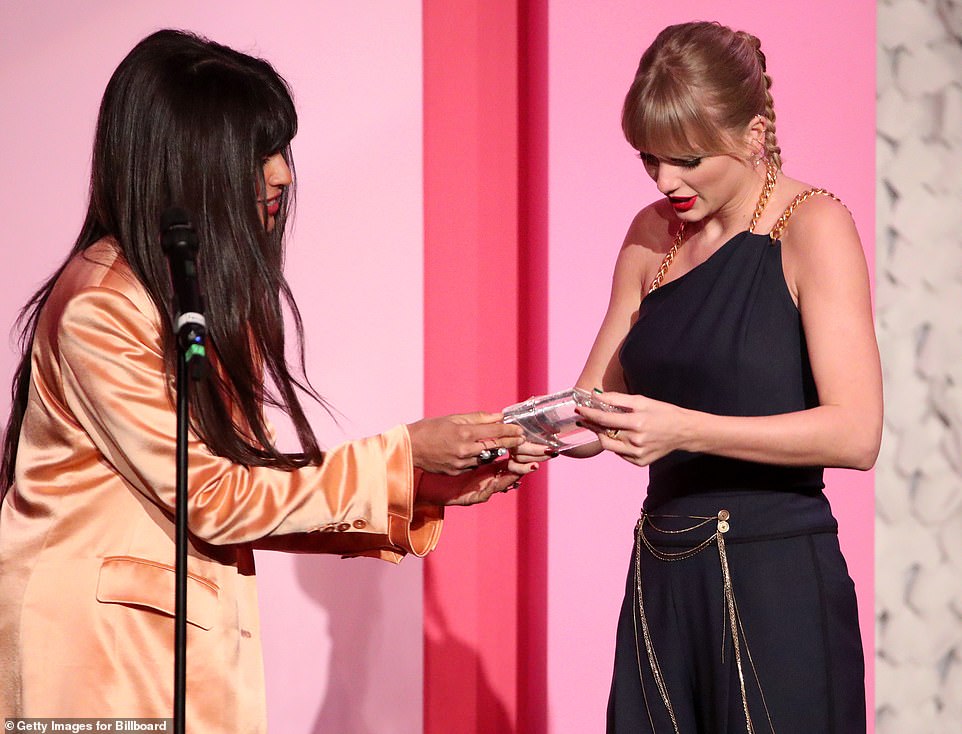 The presenter: Jameela Jamil presented Taylor with her award for the evening and even held it for her while she gave her speech 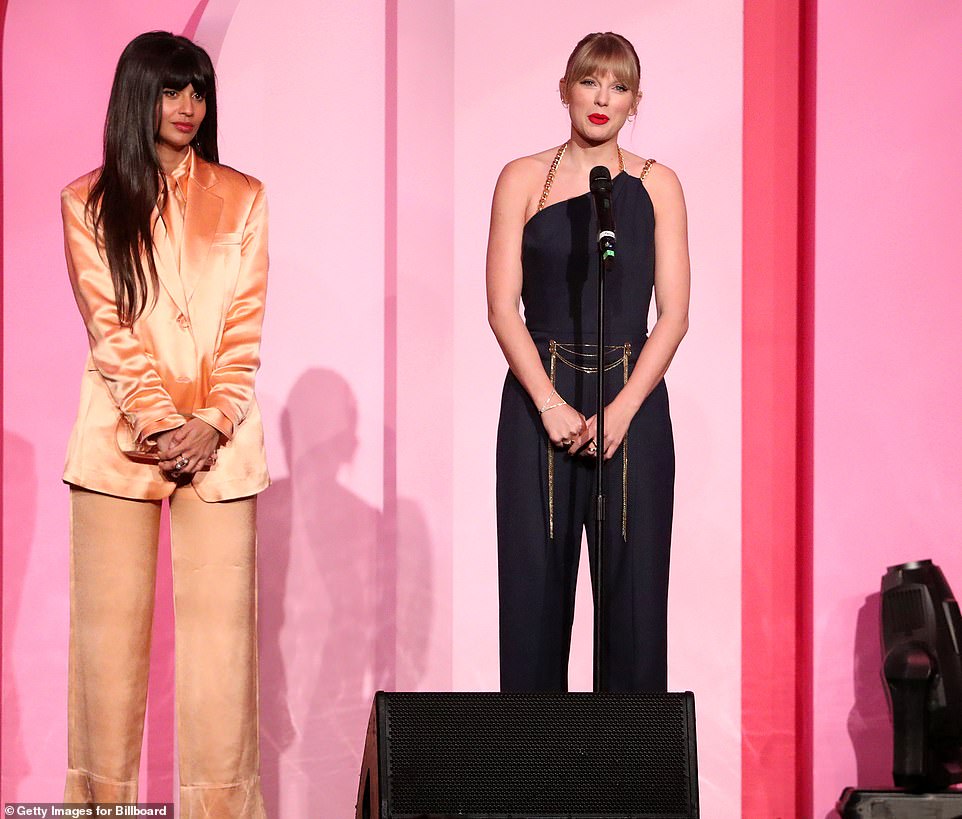 Women supporting women: Jameela stood there to support her speech as Taylor gave an empowering speech about women in the industry 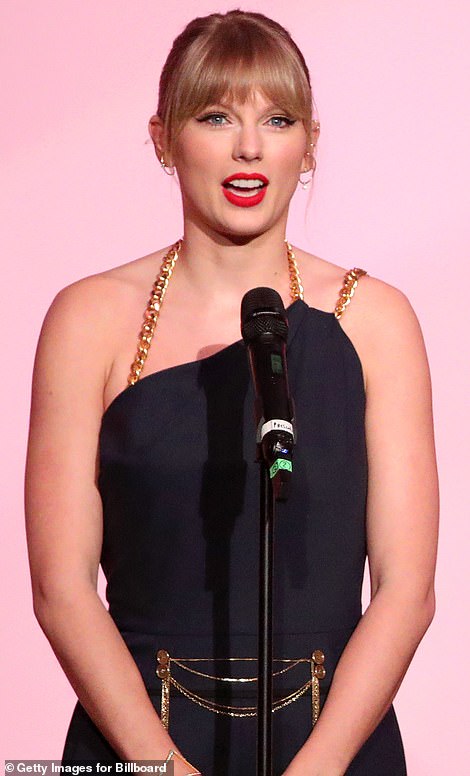 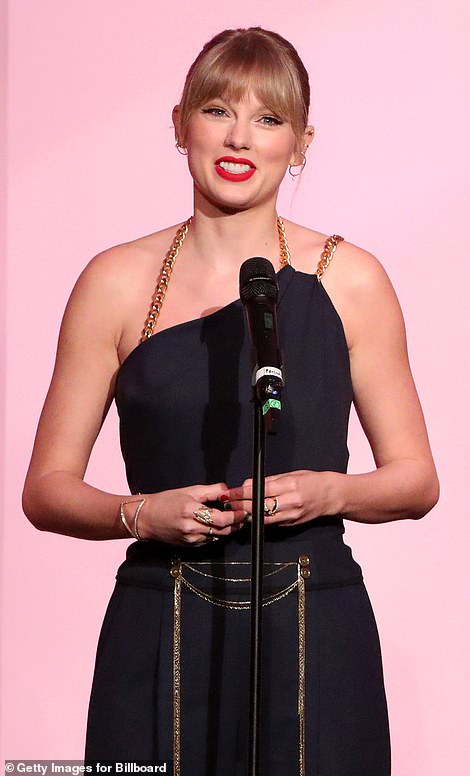 Her references: Swities were able to catch the song and lyric references she made throughout her speech 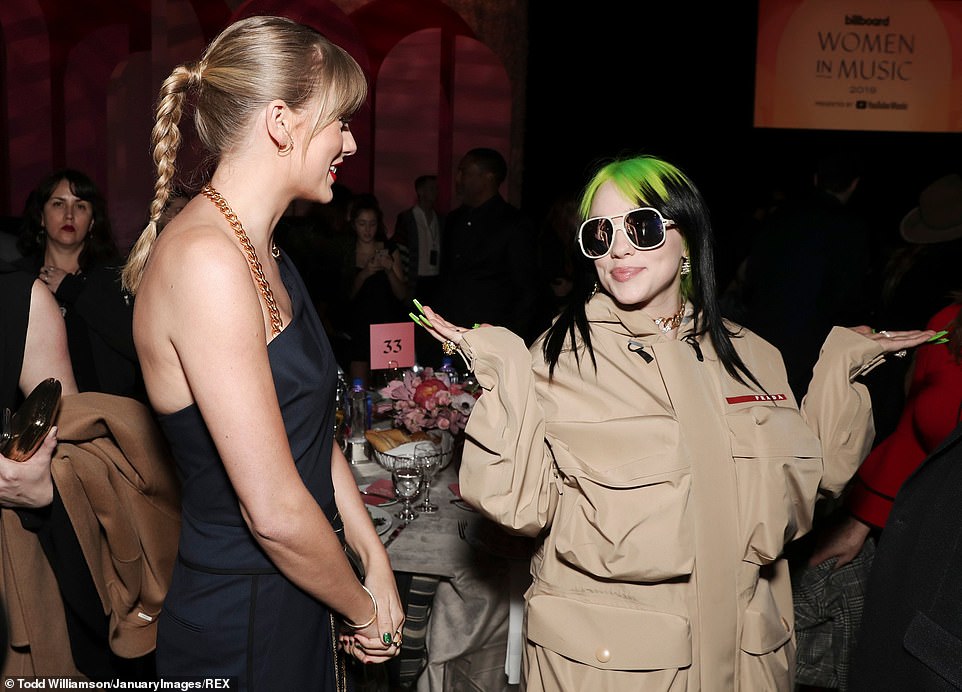 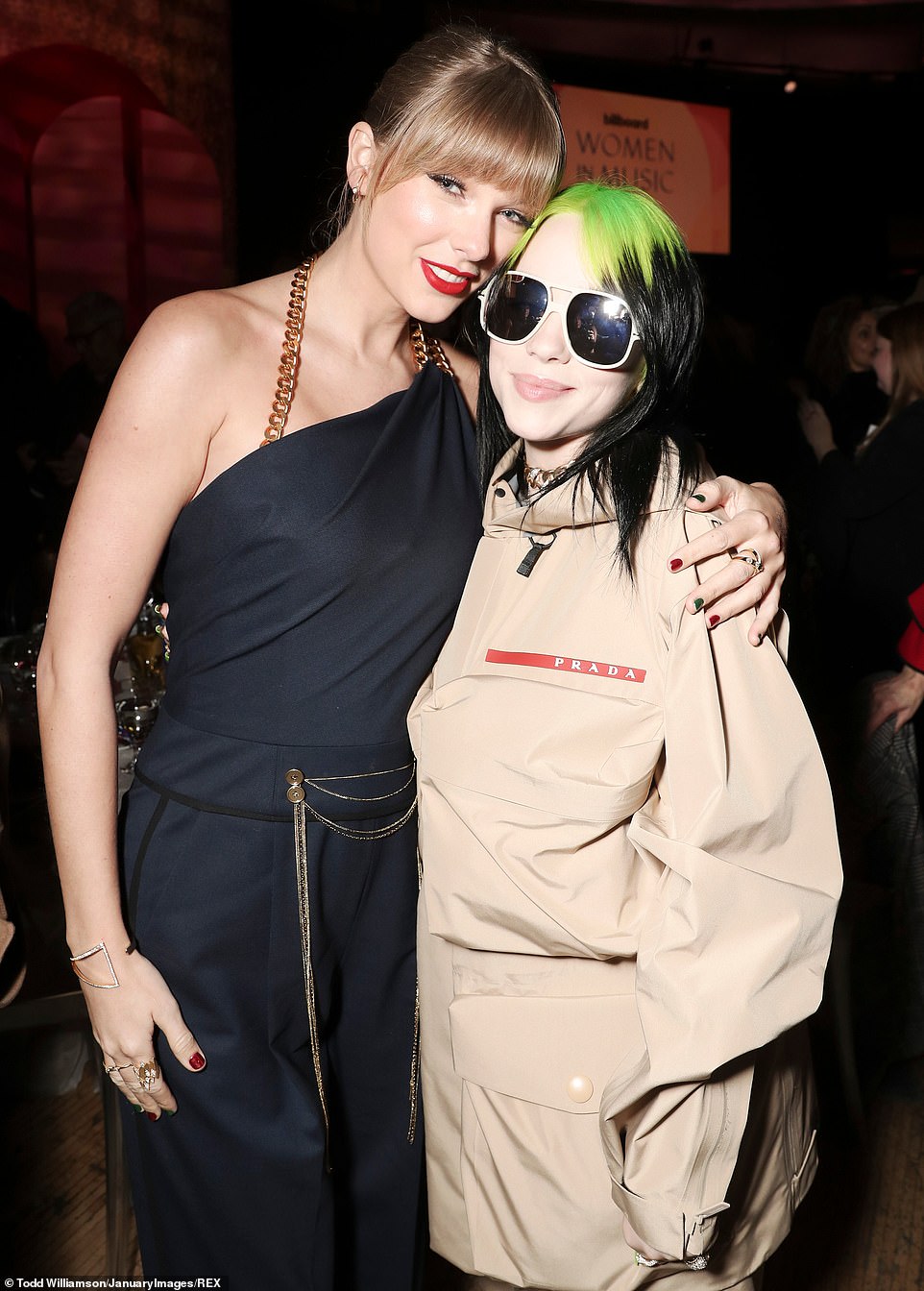 Powerful: The most powerful woman in music posed together for a photo during the event celebration 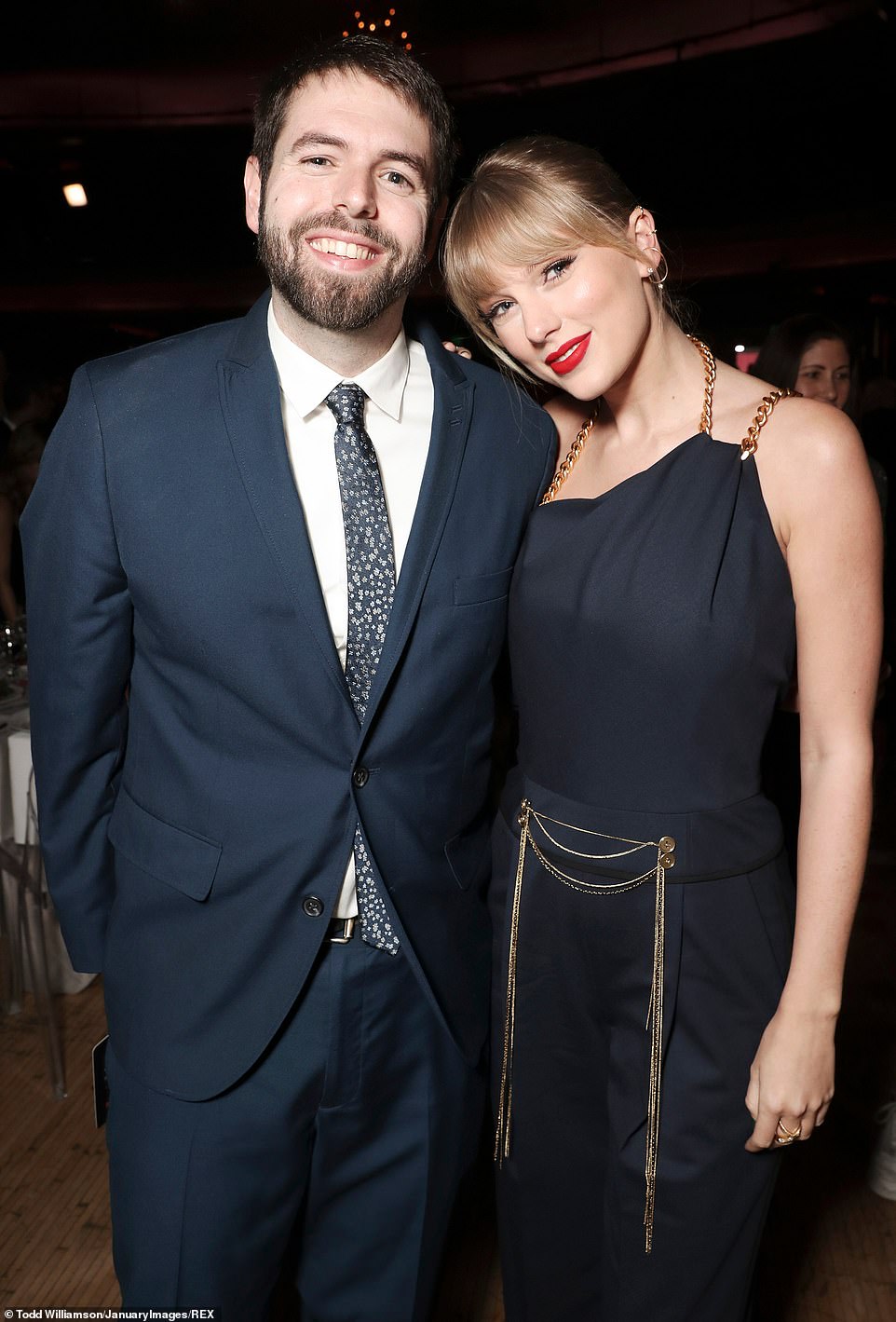 Good friends: Jason Lishutz and Taylor Swift smile together at the event as Taylor walked around and mingled with guests 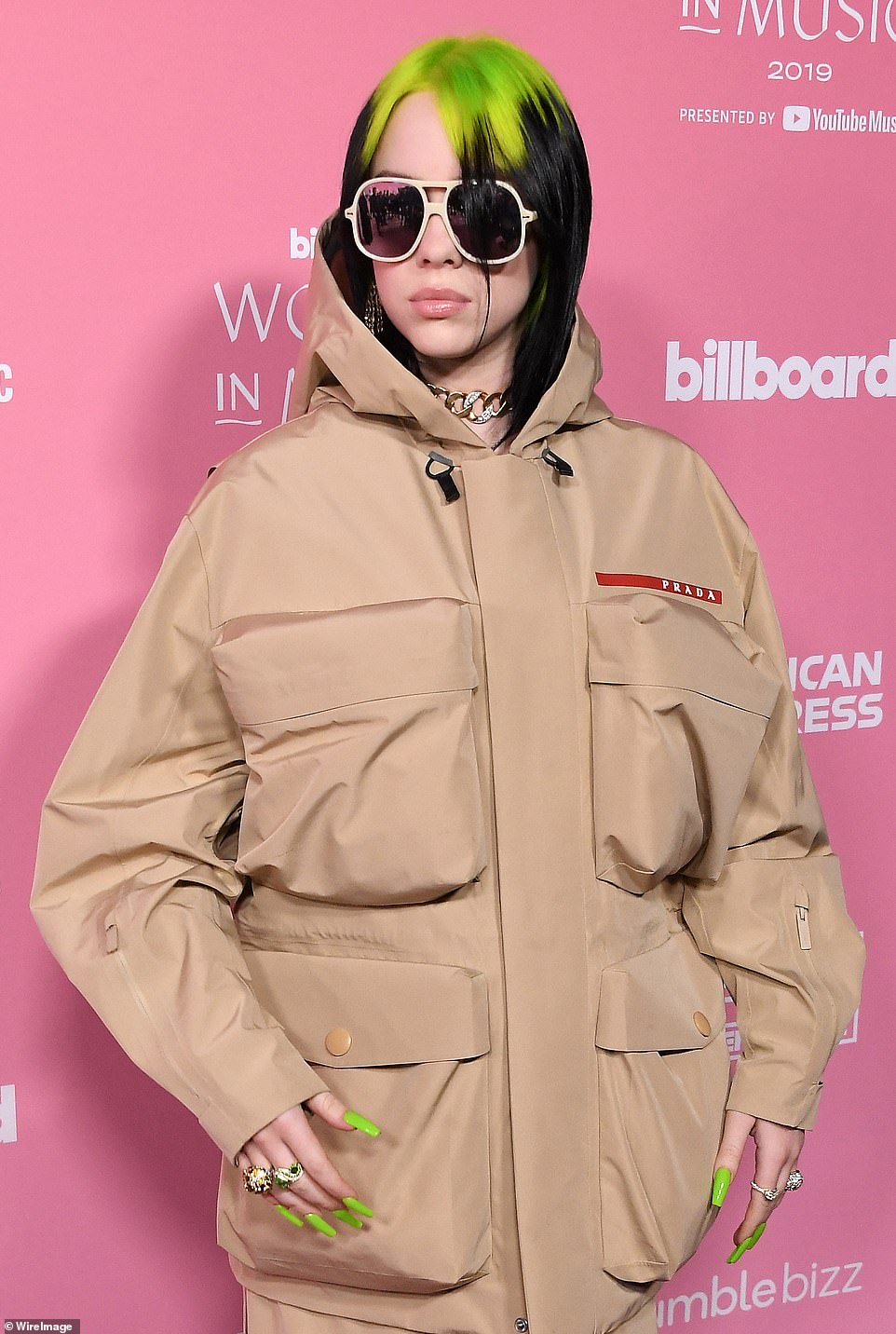 Bad guy: Billie knows how to make an entrance as she donned a brown Prada jacket and long green nails 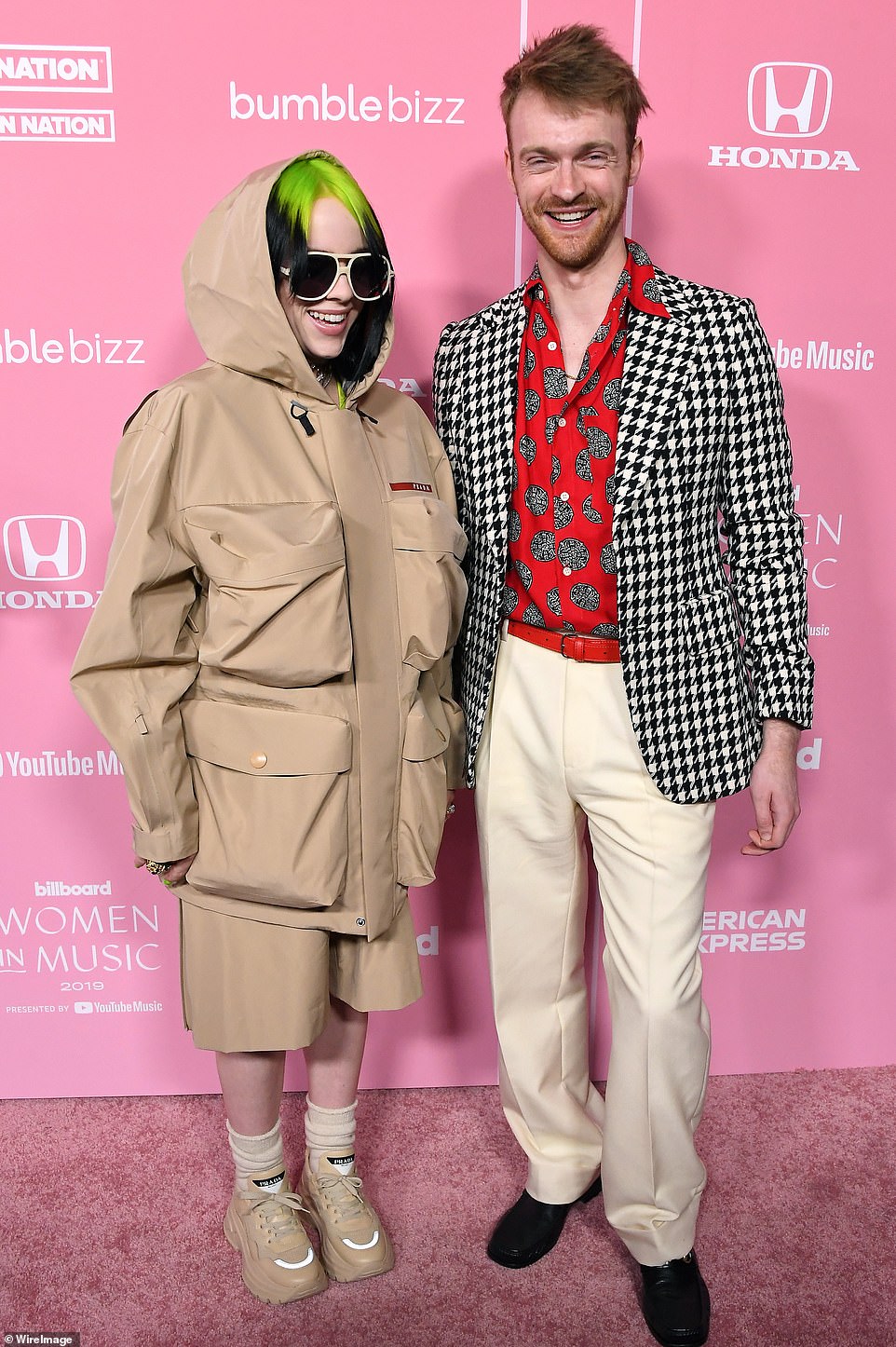 Siblings: Billie and her brother Finneas O’Connell pose together on the carpet ahead of the ceremony 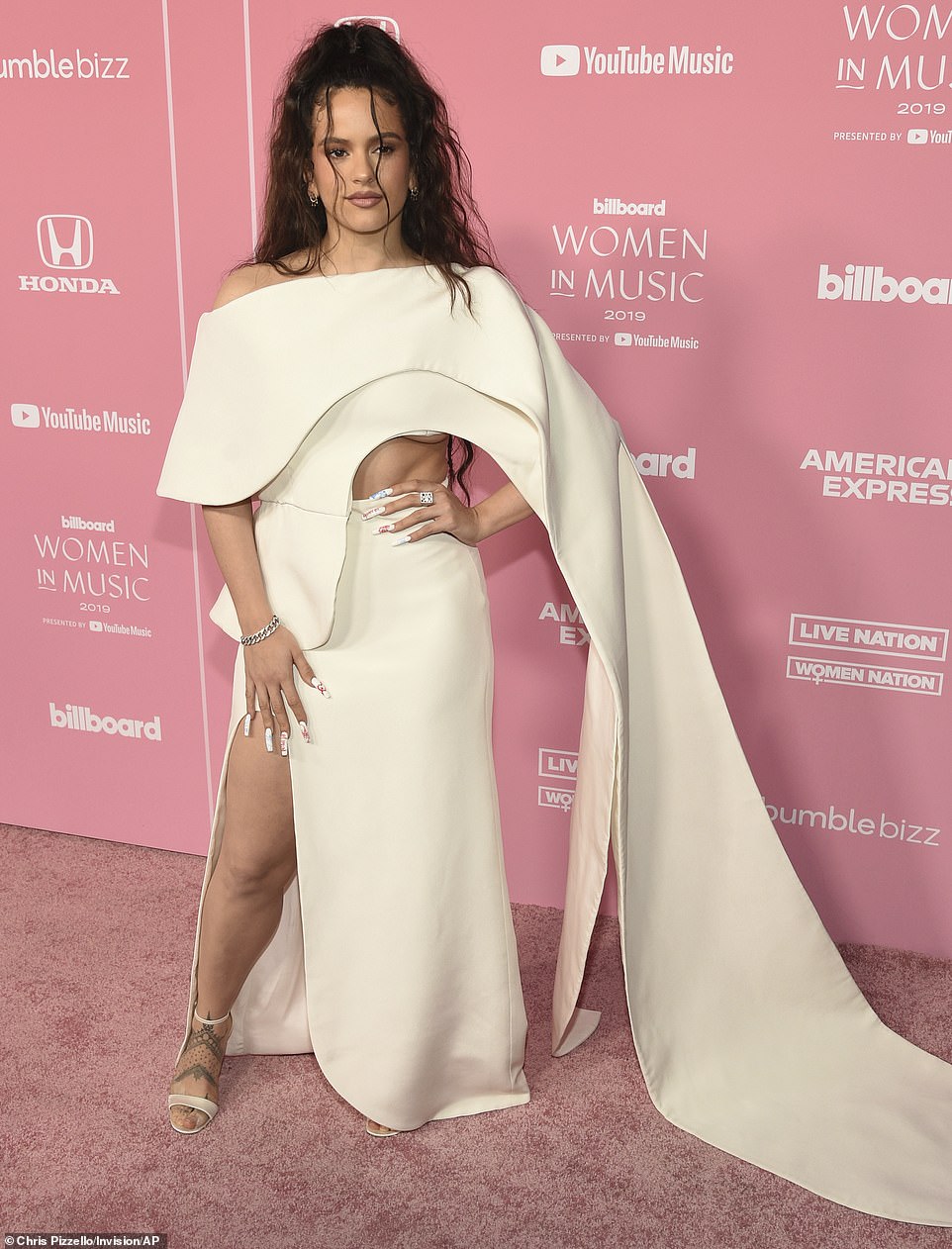 Vision in white: Rosalia turned heads in this white cut-out gown with a long white train and matching high heels 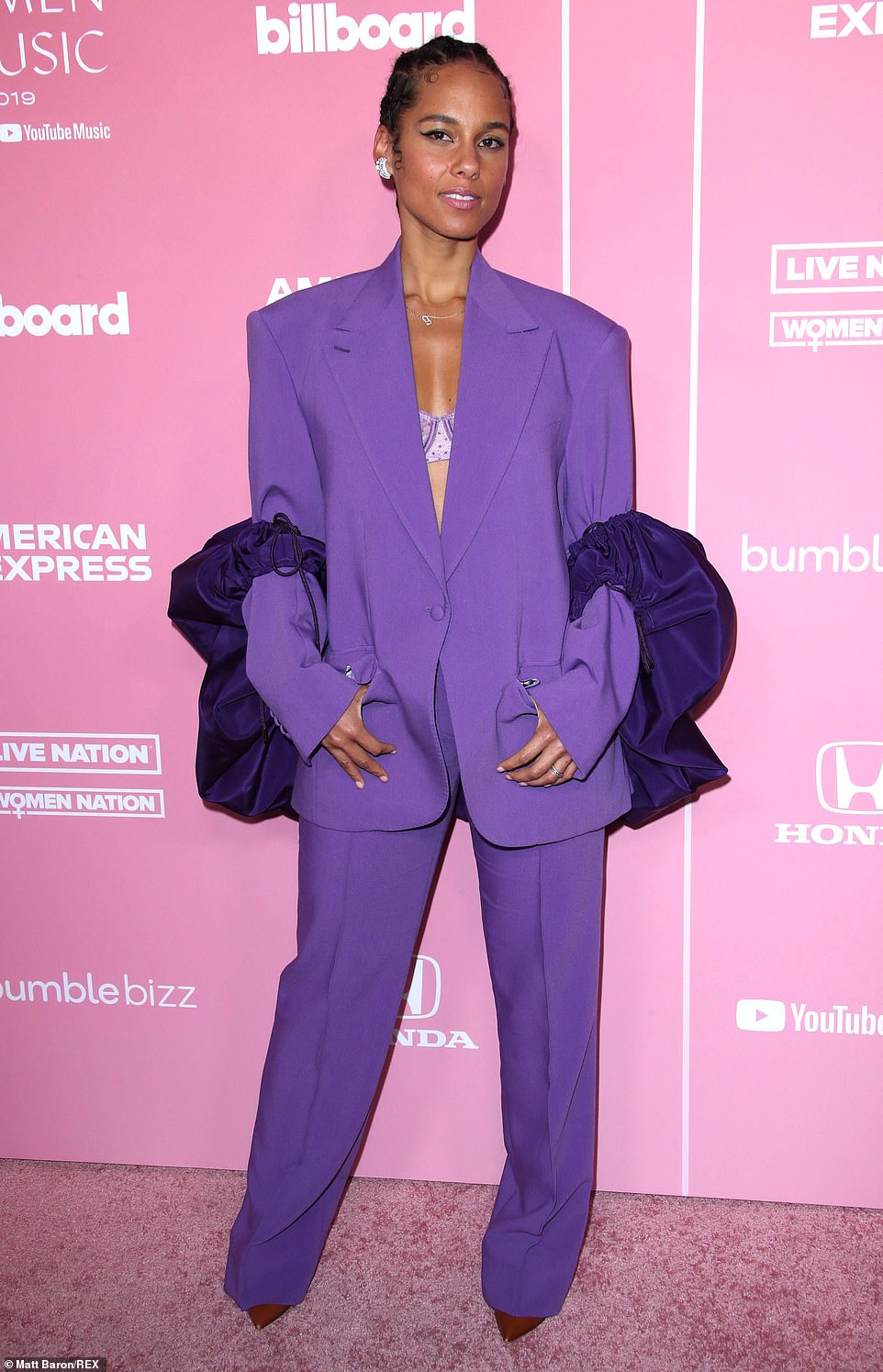 Powerhouse singer: Alicia Keys looked chic in this powerful purple suit where she later would receive the impact award 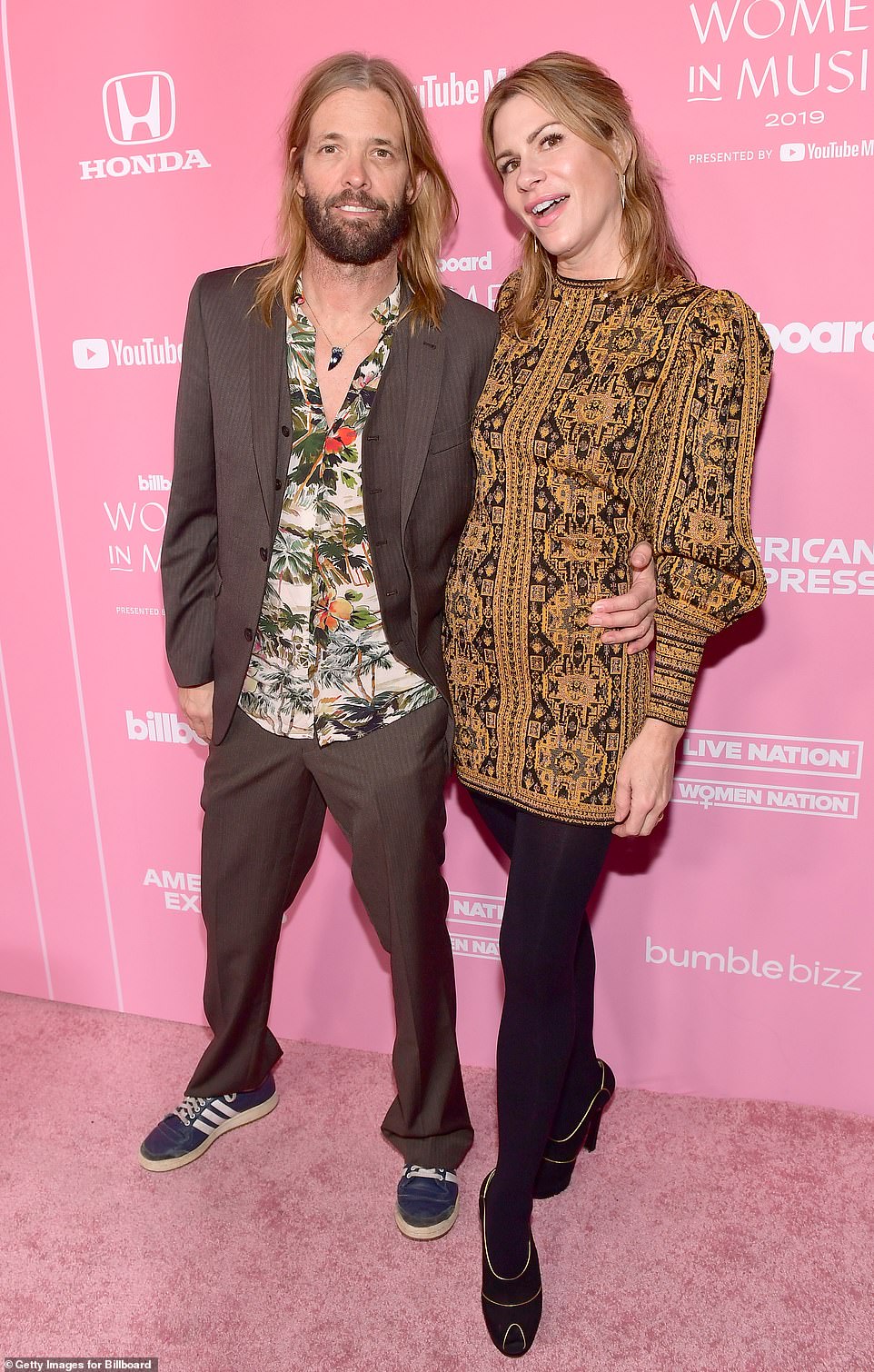 Having fun! Taylor and Alison Hawkins pose together in coordinating outfits. Alison looked chic in the abstract-pattered dress and black tights 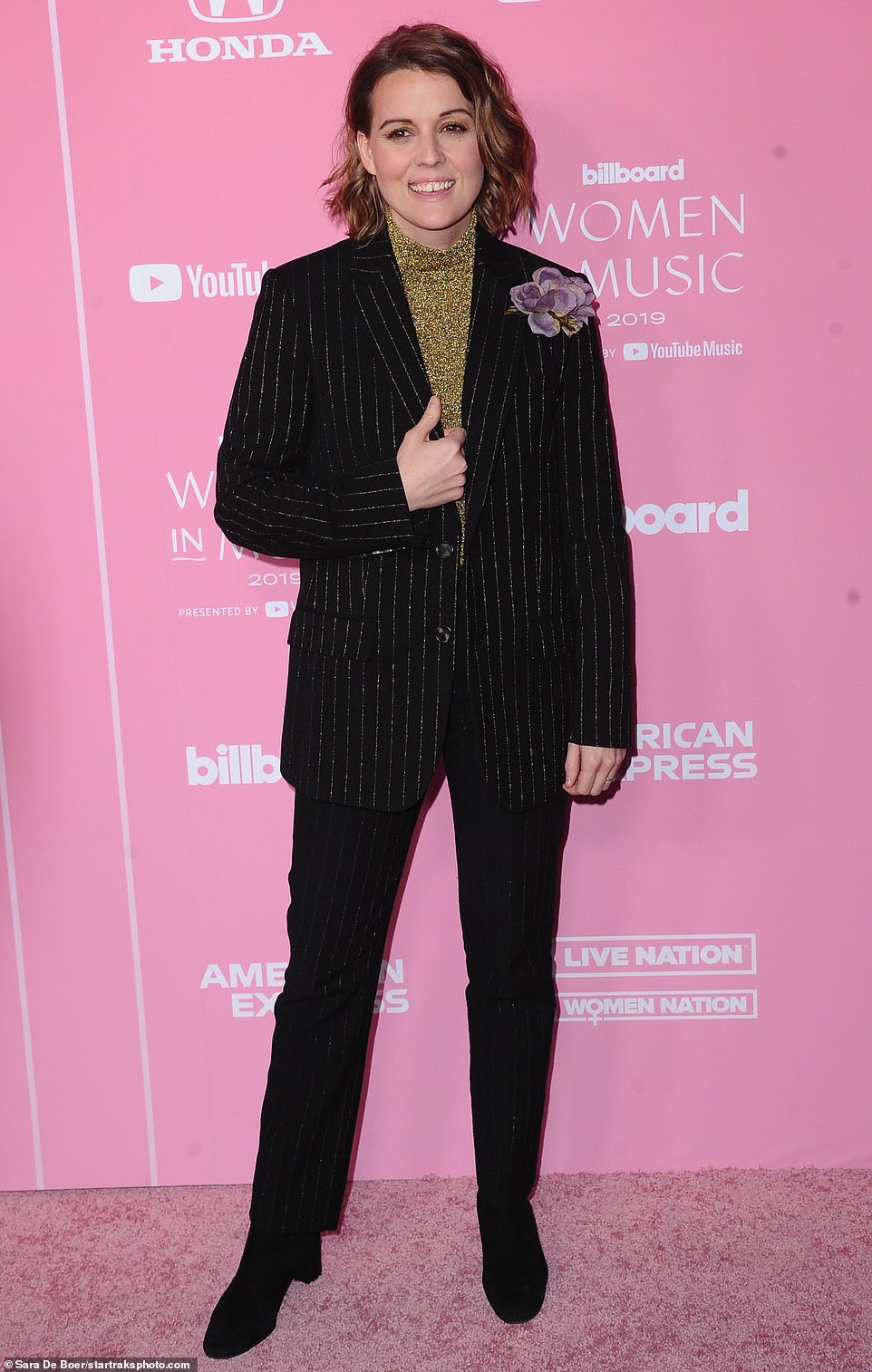 Power suit: Brandi Carlie wore a chic black pinstripe suit with a purple flower on the blazer. Underneath she added a subtle pop of gold to the look 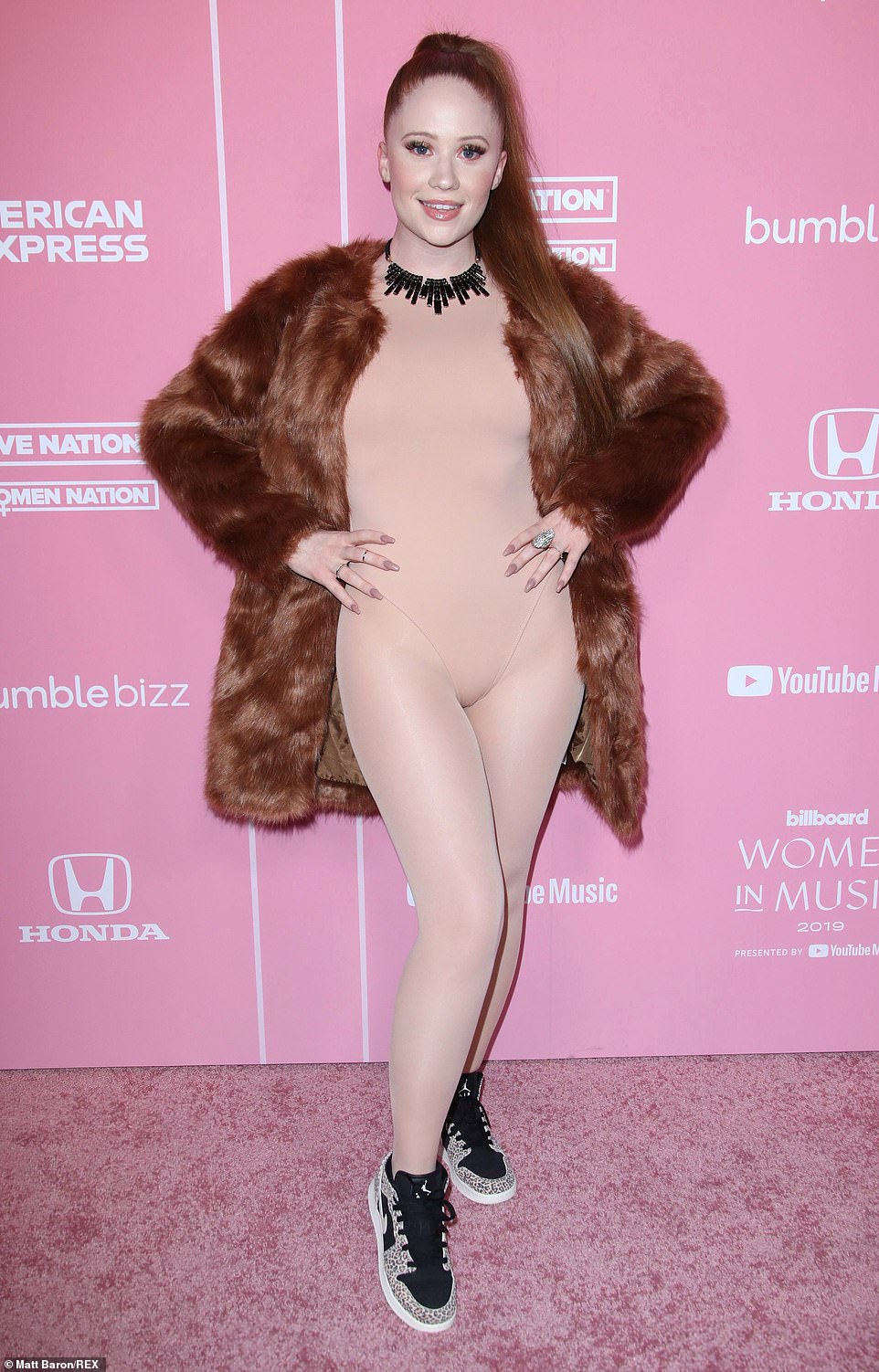 Stylish: Iyla Blue threw on a nude one piece underneath a brown fur coat to attend the star-studded event 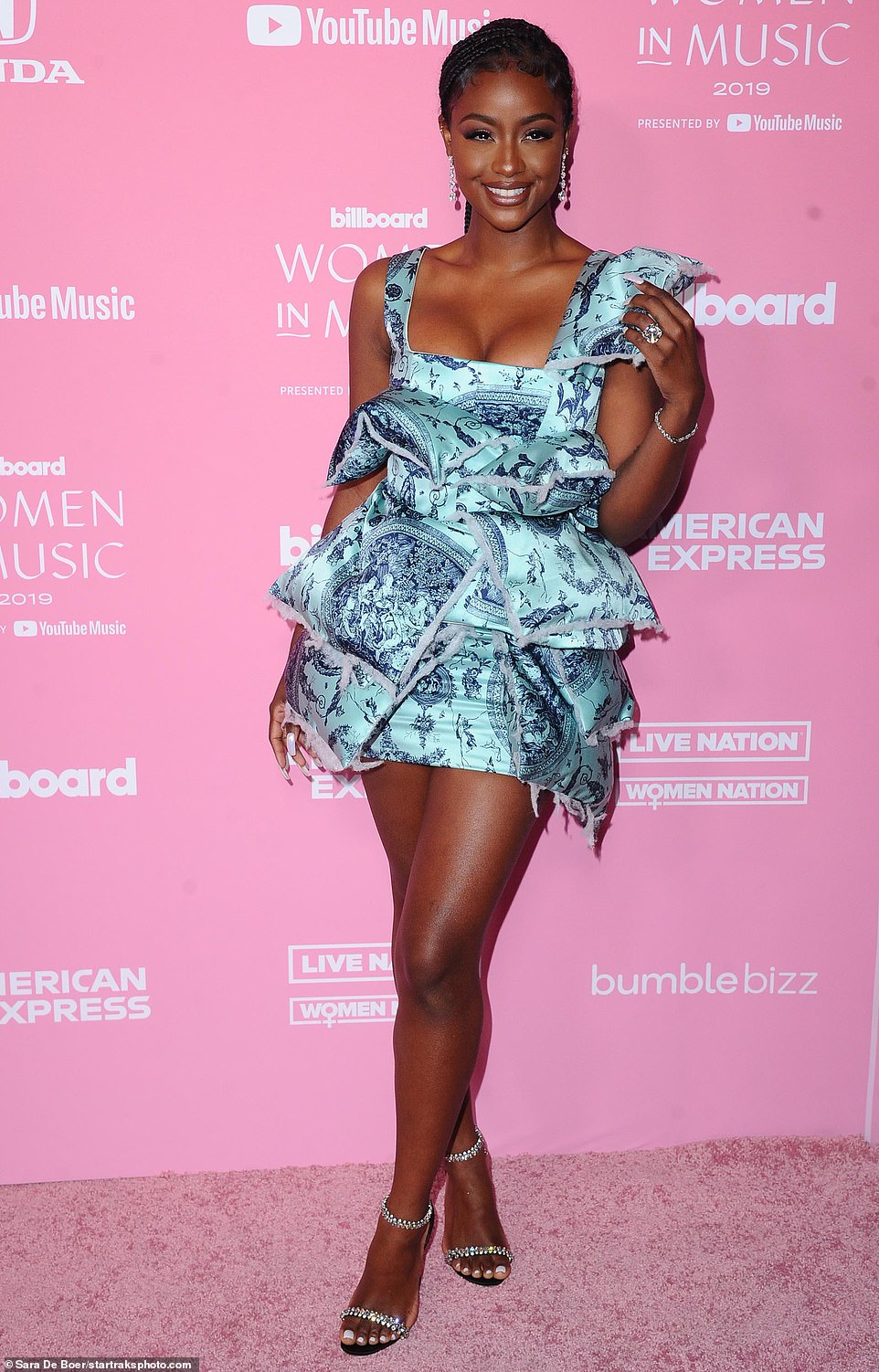 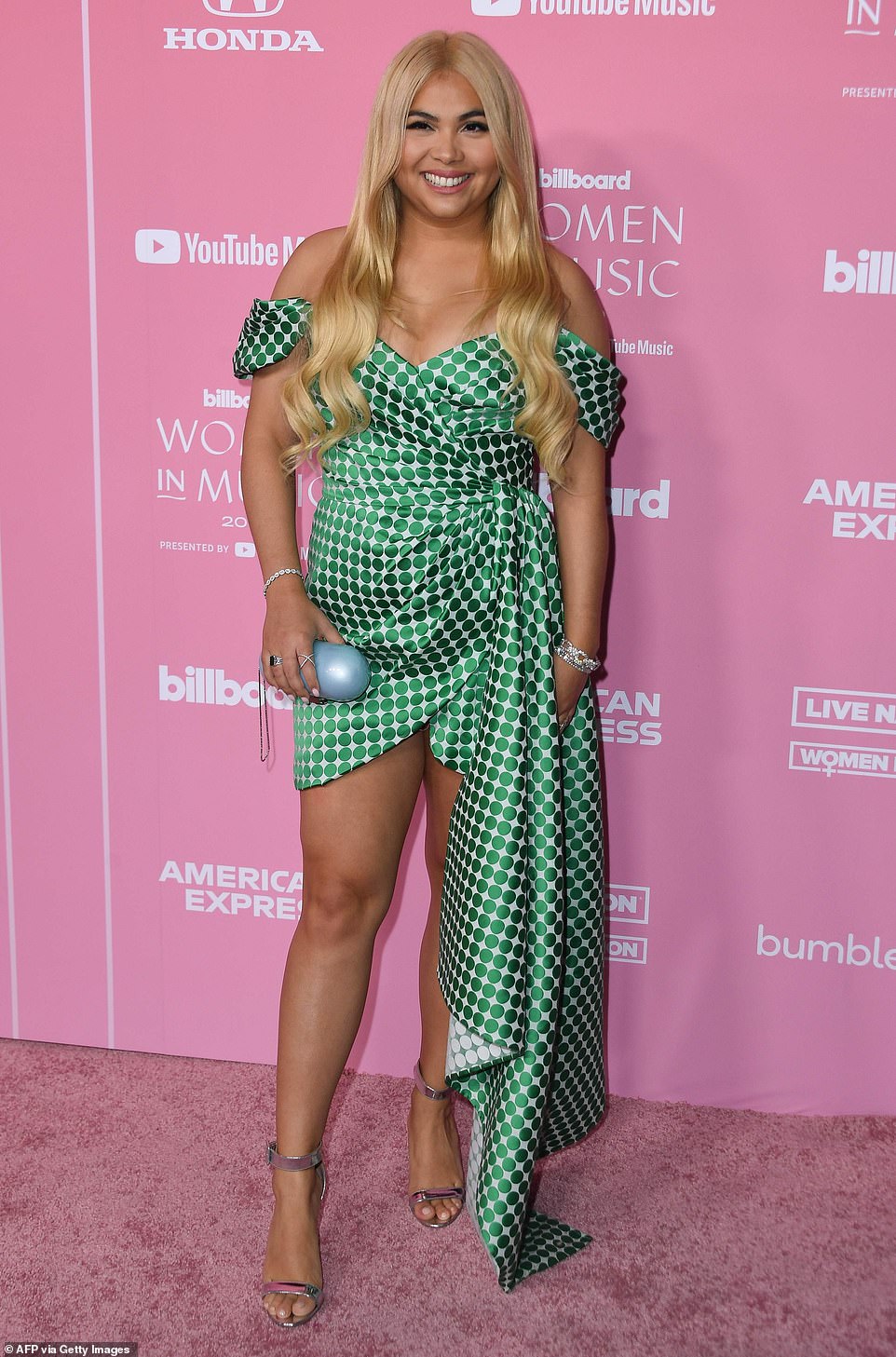 Beautiful: Hayley Kiyoko looked radiant in the green polka dot dress as she geared up to host the event 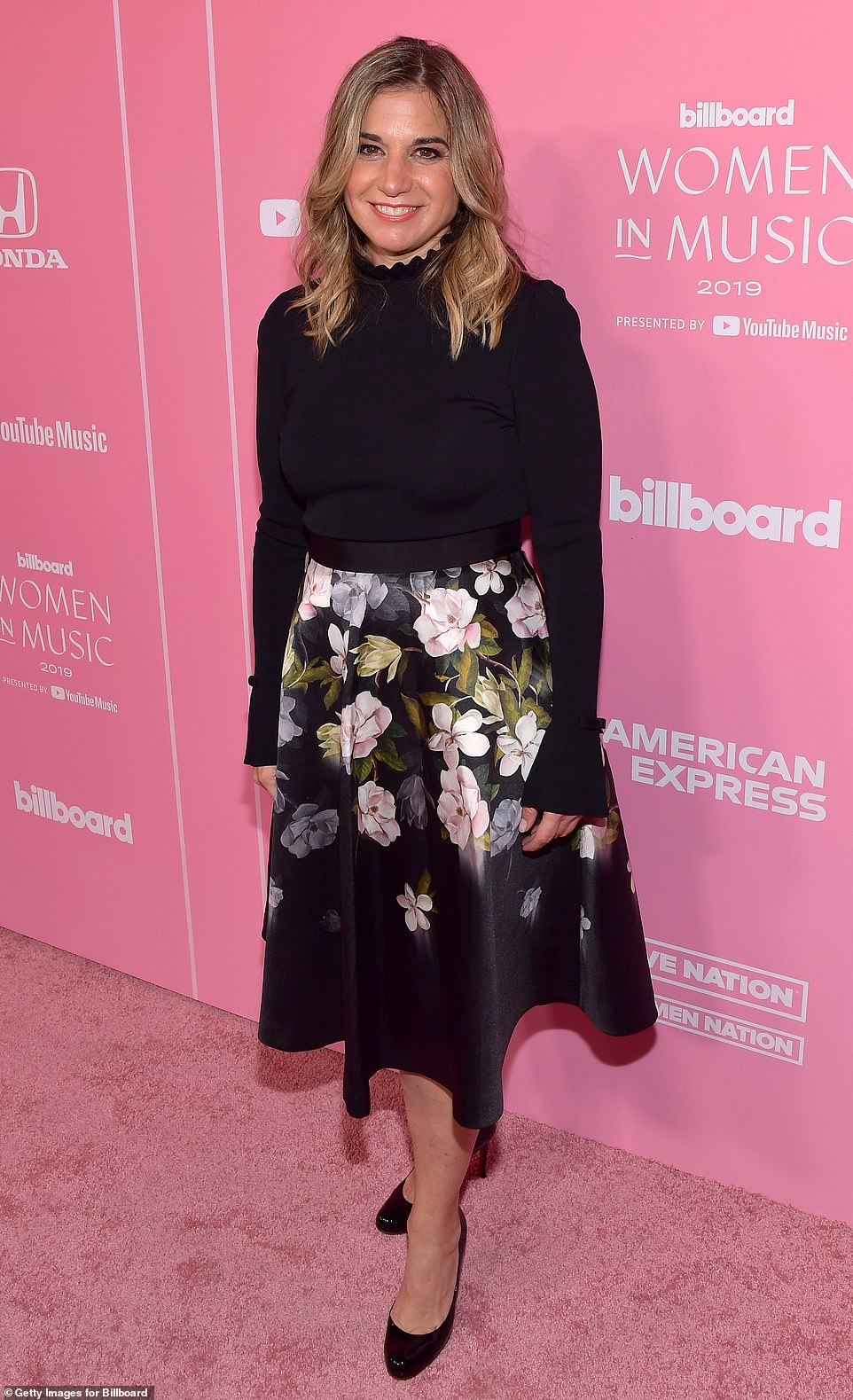 Lovely: Deborah Curtis looked lovely in in a black sweater and black skirt for her night out