By James Wood For Mailonline

A manhunt is underway after a teenager was shot inside a north London chicken shop this evening.

Police raced to a fast-food restaurant near Turnpike Lane station at around 8.30pm following reports of a shooting.

Upon arrival, they found a teenager with a gunshot wound who he was immediately taken to hospital for treatment. His injuries are not life-threatening.

It comes just a week after a 17-year-old boy was left fighting for his life in hospital after he was shot near the same chicken shop.

Police raced to a fast-food restaurant near Turnpike Lane station at around 8.30pm following reports of a shooting (pictured, officers at the scene) 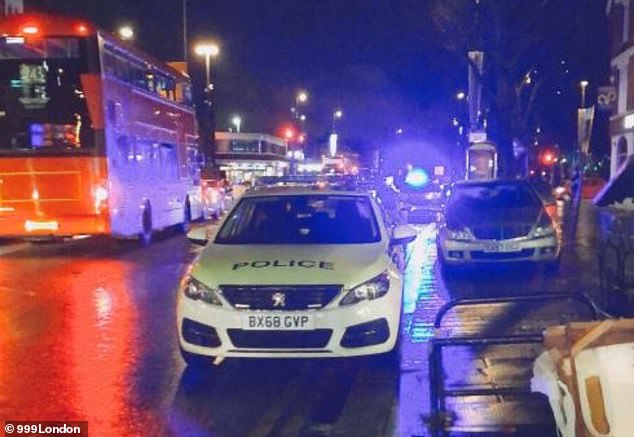 A spokesman for the Metropolitan Police said: ‘Officers, including firearms officers, attended. A male was found suffering from a gunshot injury.

‘He was taken by the London Ambulance Service to an east London hospital; his injuries are not believed to be life-threatening.

‘There have been no arrests and enquiries continue. A section 60 order has been authorised.’

London Ambulance Service was also called to the scene.

A spokesman said: ‘We sent a number of resources including an ambulance, a joint response unit responder and an incident response officer.

‘We treated a teenager at the scene before taking him to a major trauma centre.’

Last week, police were called to Roosters Piri Piri chicken shop after a 17-year-old boy was shot outside the same Tube station.