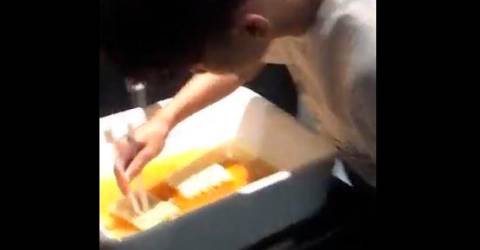 RECENTLY, a video went viral on Twitter showing a group of boys using a washroom sink to cook instant noodles at a hotel in Kuala Lumpur. Almost immediately, the video received a massive backlash because of how disgusting it was.

In the 19-second video taken from a TikTok account by the name of @nielakee, a young man can be seen in the bathroom cooking two packets of instant noodles in the sink next to the toilet.

The video did not impress the Twitter users and they were disgusted and furious over the filthy process of preparing the instant noodles. Many called out the teens for being foolish.

They were also criticised for going after cheap publicity just to gain views on social media platforms.

“I bet they didn’t even eat the noodles, just for the sake of content,” said one comment.

Many pointed out the obvious solution of buying cup noodles if there aren’t any bowls available.

“If you guys can afford to stay in a hotel, getting cup noodles shouldn’t have been a problem,” another user said.

The TikTok clip that was posted on Twitter has been viewed over 1.2 million times with 698 retweets and 6,360 quotes retweets.