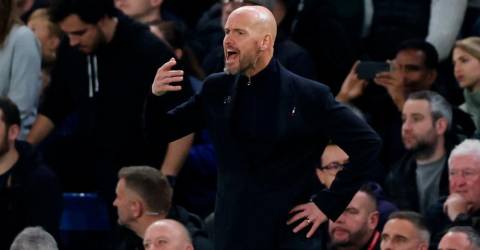 MANCHESTER United boss Erik ten Hag hailed the growing influence of Casemiro in their midfield after the Brazilian international scored in added time of Saturday’s 1-1 Premier League draw at Chelsea to salvage a point for his fifth-placed side.

Casemiro was signed from Spanish side Real Madrid in August to bring some badly needed aggression and steel to the centre of the pitch for United and the five-times Champions League winner has slowly grown into his role.

The 30-year-old headed past Chelsea goalkeeper Kepa Arrizabalaga in the 94th minute to deny the hosts all three points after Jorginho’s late penalty looked to have sealed a narrow win.

“He’s growing from game to game and now he made the equaliser. And that gives the team and him more confidence,“ Ten Hag told reporters. “We need headers, and it was a great finish.

“But he’s coming in the team and you see how important he is. I think he was massive today in his performance. He’s now matching the Premier League intensity and from game to game he’ll be better. I’m confident of that.”

Ten Hag rued the lack of a cutting edge in recent weeks and said the team missed forward Cristiano Ronaldo, who was dropped for the game after refusing to come on as a substitute in their 2-0 win over Tottenham Hotspur on Wednesday.

“As always, he can score goals and he’s value for us. We need him, it’s clear and you see it also in this game. He can finish off, that’s quite obvious,“ Ten Hag told Sky Sports.

“I’ve said enough about that situation. Let’s focus on this game, it was a good game and I have to compliment my team.” – Reuters