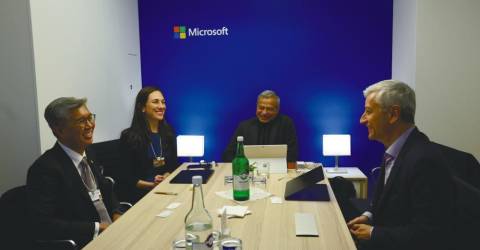 At their meetings with Tengku Zafrul, which discussed potential investment and expansion, Ericsson was represented by president and CEO Borje Ekholm and Microsoft by executive vice-president Jean-Philippe Courtois.

Tengku Zafrul is leading the Malaysian delegation to WEF 2023.

“It has been great so far. As you know, the 2023 WEF has about 2,700 leaders from 130 countries, including 52 heads. I am looking forward to more bilateral meetings, especially with my counterparts,” Tengku Zafrul said when asked about a string of engagements and bilateral meetings he has had since arriving here on Monday.

“Some of the companies we met have already been investing in Malaysia for a while but want to ensure that their investments are protected. We also spoke about the potential for expanding their operations and increasing their investments in Malaysia,” he told Bernama on Tuesday on the sidelines of WEF 2023 at the ski resort town.

Tengku Zafrul disclosed that the conversations also touched on what Malaysia could offer these multinationals. “So, with the new government, we are looking at stability and we also spoke about Malaysia’s prospects,” he said.

Besides that, Malaysian companies are expanding abroad and these multinationals can also assist them in the endeavour, said the minister.

The discussions with Jetro revolved around measures for strengthening cooperation to facilitate Malaysia-Japan trade.

Jetro also presented its findings on Japanese companies’ performance in Asean countries, which showed that 59.7% of Japanese firms in Malaysia recorded profits in 2021, an improvement of nearly 10% versus their performance in 2020.

In addition, 43.2% of Japanese companies in Malaysia are planning to expand their operations.

On the presence of “Malaysia House” for the first time at the WEF, Tengku Zafrul said it is a good approach for Malaysia’s presence to be felt.

“Other countries have taken this approach many years ago. We need our presence to be felt – a stronger presence than before,” he added.

Among the scheduled sessions in which the minister will participate is on the cost of economic fragmentation, supply chain and transport as well as a session titled “Living with Risk” where Tengku Zafrul will be one of the three panelists.